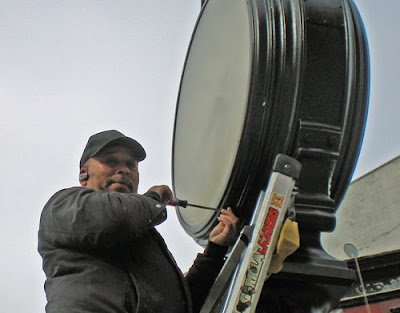 Time still stands still in Jersey City. And not in the way that can prevent gray hair or flab or wrinkles or keep the good times from ending.

Readers might remember that I wrote about the non-working Jersey City clocks a while back. Click Here for that Dislocations exclusive!

Turns out, the one on the Newark corner was actually hit by a truck and there is an insurance settlement involved so it might be some… time… before it is working. But service was attempted on the Grove Street clock on March 5, 2010 by Dennis Lindo, Field Service Technician for The Verdin Clock Company. 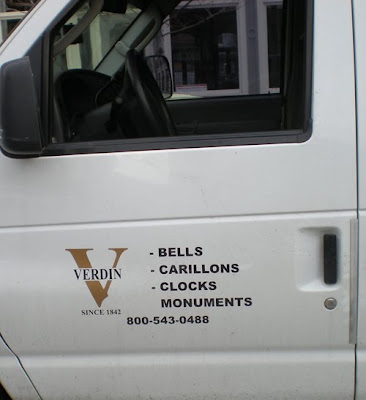 The clock is due to receive a new set of hands, a new motor, and a new digitized controller, all of which were in the Verdin van—I want to call it the Time Mobile—and ready to be installed, but upon inspection, Dennis found the covers were too old. “I’m recommending we replace the covers,” he said. 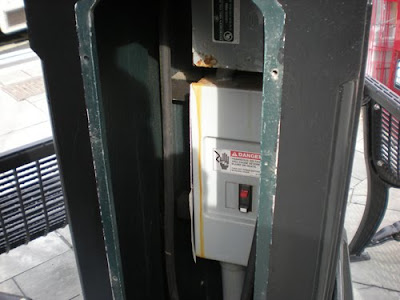 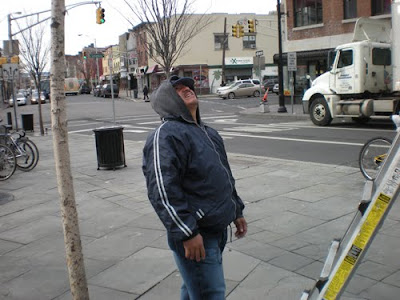 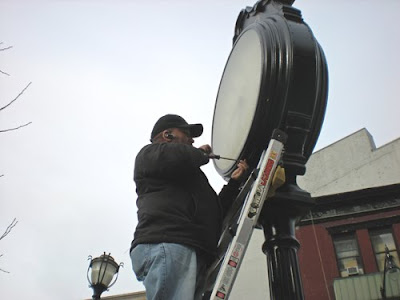 The right time at Grove will be delayed—just like a PATH train. (that was too easy to avoid).

The covers are the round metal pieces holding the transparent plastic lids—what you might call a watch crystal if these clocks were watches—to the metal rim around the clock face. According to Dennis, who was onsite with his assistant, Jose, if he replaces the internal mechanisms with the old covers, the clock housing might be unstable. It would take no more than two days to get new covers, which means a functioning clock at Grove could be less than a week away. Some of this might be contingent on the terms of the contract with the city, which was why he had to phone the company. But it should be resolved in… well, it’s just a… matter of time. 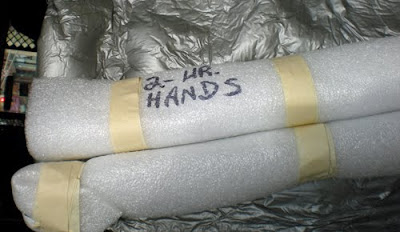 I apologize. I’m running out of time related wise cracks. I love the faux nature of these Verdin Clocks. They are of course, Replicas of actual clocks that have been part of downtown since it is believed, the 1890s. Sure they look like a public time piece from more than a century ago, until you get close and see the metal is thoroughly modern. The clocks were installed in Downtown in 1997. 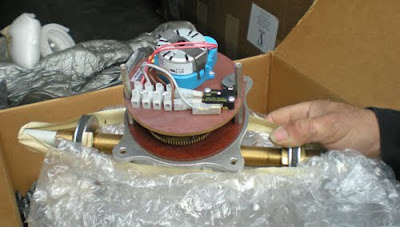 “They don’t look to me that they’ve been serviced since then,” he told me. You could tell he knew what he was talking about. He reeked with competence. More than 80 public clocks are under his care. His territory for Verdin, in addition to New Jersey, includes the five New York Boroughs, Long Island and New Jersey. 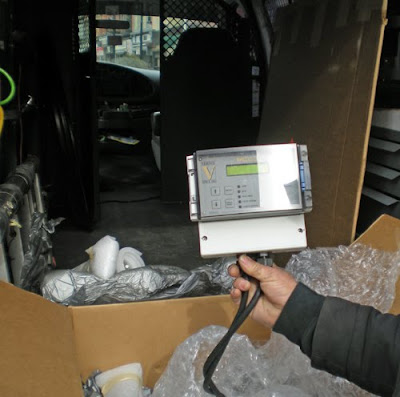 “What about routine maintenance?”

Dennis explained that service visits from a Verdin tech are necessary every few years, but about twice a year, routine maintenance, which basically involves lubrication, must be done on the clocks in order for time to be maintained. “They will keep better time. We can have somebody from the company come. I am more than willing to train somebody from the city to do it. It’s very easy.”

The new digitized controller will make the clock more resistant and precise and includes a feature that will automatically spring forward and fall back for the daylight savings time changes. Everything, the new hands, motor, controllers—everything but the covers—were in the back of the van. He showed them to me. All ready to go, looking sleek and high-tech, not a gear in sight. Nothing that would emit a tick or a tock. No matter how quaint an exterior, the whole world runs on technology. Hey, at least technology keeps good time. 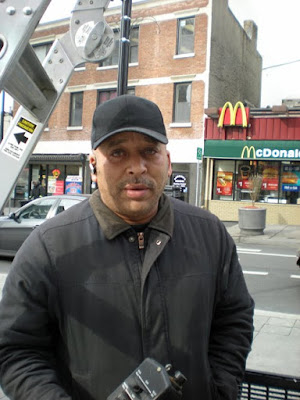 The clock used to run, but at the wrong time. Now it is stopped. Like the old joke, at least it is right twice a day. I never seem to look at it at the right time. I only see the wrong time. If only I could get my glancing down to a schedule.

No matter how subtle or subconscious, it is still unsettling to see the wrong time on the clock, even when you know it is wrong, when you expect it to be wrong. But maybe soon, it will be right, just wait.