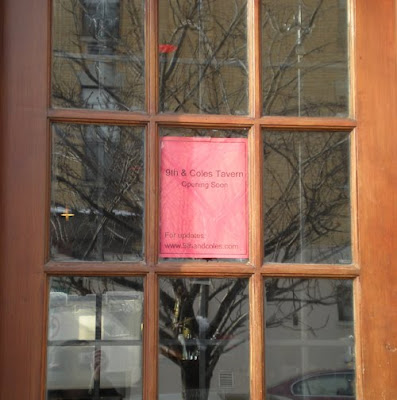 I don’t drink like I used to but who does? Doesn’t mean I don’t enjoy a few now and then even if a few means no more than two these days, usually. St. Patrick’s Day is just around the corner and my thoughts have turned to the sentences of James Joyce, the phrasing of Van Morrison and the smoothness of Jameson.

I wrote about the closing—well not the closing, just the fact that it did close, the actual closing was unbeknownst to me—of Beret’s Simple Cafe here. If you do happen to click on that link to the blog item, notice the quaint wooden sign on the pole, it’s still there. I guess the wooden sign was taken by the owner so the changing of the guards could take place. I happen to pass by this 9th and Coles about once a week, and I used to stop in here to lift a social glass and get a bite to eat. Keri, the bartender was pretty swell.

A few weeks back, I noticed the sign was gone. Then I ran into another patron on the street who told me someone was going to open a new place there. About a week later saw some dudes inside, painting and such. Then the other day, I saw the first sign of definite life. A sign taped to the glass. There’s a website, nothing there yet, just a place to collect email addresses. I’m not sure if I will go or frequent. I mean, I’ll go once at least to check it out and even when it was open previously, I didn’t go very often. Like I said, I don’t drink as often as I have in the past, not for any particular reason but I’m older and who has the time.

One reason I’ll return is that it is a great space, it’s just a very cozy corner bar. There’s metal trim around the place, including a few griffins among the ornate metal. The old fashion ambiance was intact, and one hopes the new proprietors won’t alter the interior too much. There was also only one television, and in the corner, unobtrusive. I hate that about bars, along with the death of the “short” beer in a pilsner glass—every beer is served in pint-sized servings these days. And don’t get me started on whiskey glass protocols (that’s another post sometime). Back to the televisions, at some point the sports bar concept spread and televisions became in abundance. You know, I’ve had some great times watching the Mets at a bar. True, last season the games were more like wakes, but still... baseball in the summer at the corner bar, it’s one of the things that makes life in America so great—but do we need dozens of televisions tuned to ESPN every time we want an adult beverage? No, one television—and good background music, maybe an occasional band—that’s what we need from the neighborhood bar.

I like the fact that the new proprietors picked a “simple” name, 9th & Coles Street Tavern. I’m not interested in promoting public drunkenness or drinking while driving, but I do think that a nice alcohol buzz while walking home is something we all should enjoy... err, responsibly of course. Seriously, with the economy still in the crapper and unemployment in these parts more than 10 percent and a republican in Trenton who doesn’t like the fact Hudson County didn’t vote for him, I was worried this place would remain empty like so many store fronts and other establishments we see. The fact somebody sees an opportunity here bodes well for the economy. Enticing Keri to return behind this bar would complete the picture.

The bottom picture here is not a new sign, just the sign that is here. It looks cool. I don’t know how old the sign is, it is the only street sign like it I’ve seen. I love the last chance for a drink feel of this corner. It’s a nice, pretty corner, a block from Hamilton Park, lush for a city in the Summer. Walk another block or two down Coles—through the Darkness on the Edge of Town—it’s the entrance to Holland Tunnel, New Jersey Industrial Skyline—the badlands separating us from Hoboken. Vist: www.9thandcoles.com/ 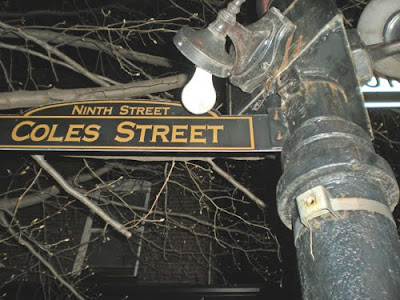