The Illusion of Illusion 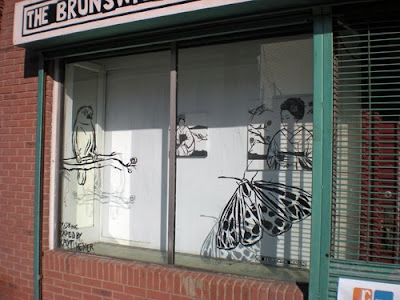 They call BRUNSWICK WINDOWS – a public window gallery, and THE BRUNSWICK WALL, a public Mural Space. You can see them both at 158 and 157 Brunswick Street, between 4th & 5th street. I’m not sure how long the current exhibit, “Beautiful Geisha,” by Kayt Hester will be displayed but it is well worth making an effort to check it out.

Dislocation readers may remember Kayt from the Tape Art Women post last year (click here). She works in tape. The description for the show says: “the works are hand shredded masking tape on canvas, glass, and paper.”

Although apt, it hardly does her justice. The craft requires an intensive meticulousness. She cuts black tape, configuring it to mimic a sketch.

As the name obviously implies, Beautiful Geisha has a Japanese theme, a very appropriate theme since Japanese culture has such a rich history of ink on paper drawing, lettering and sketches. They just about invented minimalism, especially in the visual arts. At their best, Japanese artists invest more meaning and emotion in a few simple lines than some western artists achieve in a wall-sized, full-color landscape.

With this in mind, Kayt gets that minimalist Japanese feel by substituting tape for ink. The images are of the unmistakable Japanese women, the hair, and the kimono, an expression on the face that is both subservient and distant. In addition, we see moths and birds, also depicted in the same Japanese style. 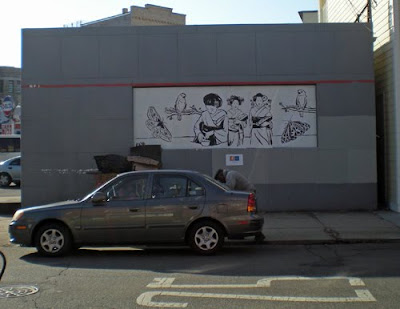 The exhibit achieves something else though, a kind of illusion of an optical illusion. Note the plural name of the “gallery” – Brunswick Windows. On the actual window—the kind with glass—is on the east side of Brunswick Street. Across the street, on the west side of Brunswick, is the sister exhibit, without glass, that is basically a sign—more like a billboard—on the side of a gas station – the Brunswick Wall. 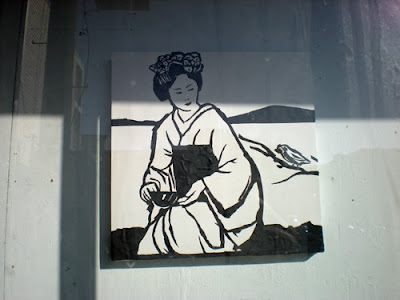 Brunswick Windows exhibits usually have this duality, with an artist’s work being displayed on both sides of the street. The Wall exhibit of course has more space, and in the case of Beautiful Geisha, the images are bigger, but they are also similar and done in the same black lines on white background. When you move your head back and forth to see both, the effect resembles a projection. I’m not sure what is being projected, whether the big is getting smaller or the small is getting bigger. Depends on which side of a concave lens the light enters. It takes a few minutes to realize the images are not exact. No lens is involved. This is not an optical illusion of an optical illusion; it is not some experiment in cockeyed stereo-optics. These are two distinct works. 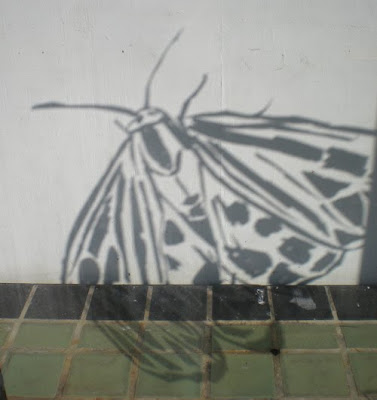 But a projection may still be part of the exhibit. Looking closely at the window you see that some of the tape images—the moth for example, are not on the background but actually on the glass. Holy Avatar—we’re seeing 3-D Tape Art! Now step back, change your position slightly, the 3-D actually gains more depth because the tape images on glass are now projected on the white background. It’s a shadow play. 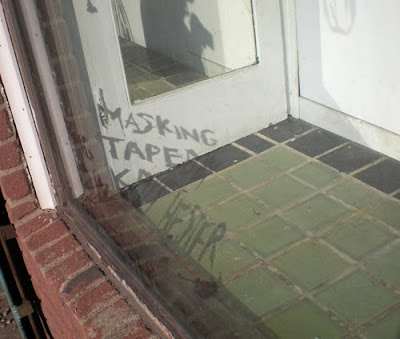 Some dang cool stuff is going on with this Brunswick Windows Exhibit. I suggest going during a sunny day. I might have to go back. The lighting effects might be different in the morning than in the afternoon, when I took these pictures. Do not try to look at the window while driving, please.

It’s not ink, it’s black tape. It’s not the same image on both sides of the street, they’re two separate pictures. Is that image an image or a shadow of an image? Is this an illusion or an illusion of an illusion?