Are You REALLY Sick of Snow? 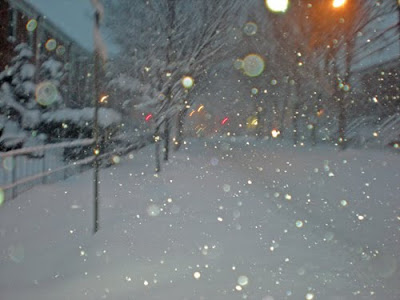 I’m not sick of snow because we say the word sick so often that it’s become a meaningless cliché—as opposed to a meaningful cliché, of which there are many. It’s one of those blunt exaggerations that reveal a shallow personality and a sluggish mind. 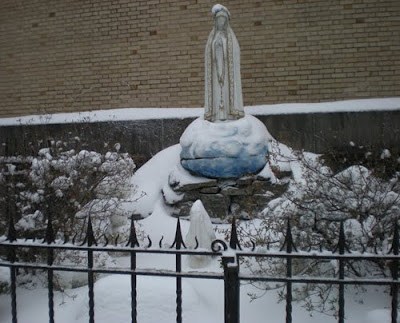 People with cancer or the flu are sick. Are you having any physical symptoms of illness related to snow falling? I’m not, but I admit that I am sick of damp socks. Gosh Darn it, there I go again. I swear that was a slip up, I’m not shallow or sluggish. This use of sick is just an example of lazy language. It’s a trap that is easy to fall into.

We say sick because of mental sloth, but it started as a means to improve communication. This insisting on the inconsequential as making us sick is a result of our melting pot nation. Our clipped, somewhat hard boiled phrases that are blunt, inflated and sardonic emerged in the early to mid 20th century. The immigration era.
You get a bunch of first and second generation folks where American English was a new or second language, and they had to come up with short cuts—we all understand the word sick and we all talk about the weather—let’s face it, religion and politics can often lead to fist-to-cuffs; weather discussions are the only safe conversations. So, why not use illness to reflect your disgust with the weather. Idioms are the off spring of necessity. Not exactly laziness that led to their lazy use of language we’ve inherited, they were just getting on with their lives, language being only one part of that life. I forgive my forebears. It’s not like immigration halted after World War II. Short cuts in language to enhance communications can still be required to make communication easier. 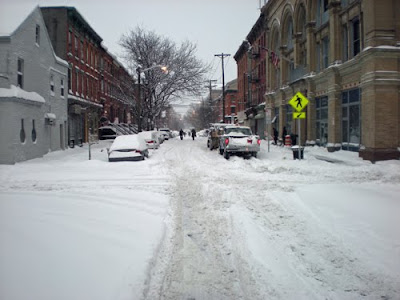 I still appreciate snow. I don’t necessarily like it, and as seasons go, the older I get, the more I prefer summer. But winter has charms even if it takes more of an effort to appreciate those charms as the season wears on. We feel warm and cozy when winter first arrives. We exclaim with joy, It’s snowing! Our hope for a White Christmas is so intense it pervades our dreams. But now, the holiday decorations are put away, the Christmas sales are over, the winter weather clothing inventory gone. We’re ready for a change, thinking about St. Patrick’s Day drinking and Easter Egg coloring. But nature has other plans. Not just yet. And we get snow, then more snow, then even more snow and then, a record amount of snowfall in one day. Maybe it’s too much to ask that we celebrate like it’s Advent, but is it really so hard to appreciate it? It looks nice, it transforms our usual surroundings, and it’s fun to throw a snowball (excellent snowball making snow by the way). 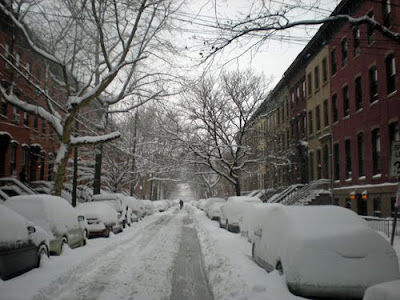 Some people incessantly complain about the weather. They feel an October breeze and say it’s freezing outside. In April, when the temperature climbs above 60, it’s hot as hell. You know the type. Admit it, you have one and likely more than one in your life right now. They are usually from Brooklyn. You know why they keep doing this? Because by February, everyone else is agreeing with them. Everyone says they’re sick of snow and those all season weather complainers are affirmed. We tell them they’re right and they go complaining about weather and what happens to us—we appreciate weather less often. 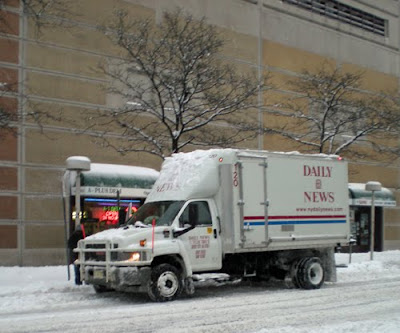 Look, it’s a drag, even potentially hazardous. Everything and everyone is inconvenienced by snow. So friggin what? It’s just weather. And besides, a little hard ship can be fun and that’s just it, as hard ships go, weather is a very, very little one. 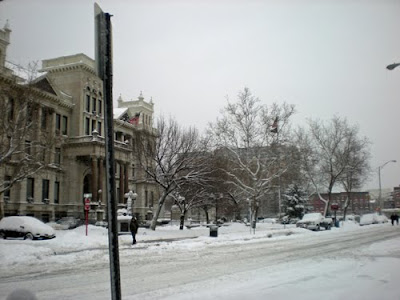 I think one reason I’m sick—shoot, there I go again—of snow is that I’m not sure what else I can say about it. Riffing on the season, riffing on the comparison of no snow vs. snow, done that. I always, almost always, have a camera with me. The disc camera things are so handy and take a pretty decent picture with little to no fuss on my part. Something strikes me, I take a picture, think of a blog entry later. I’m kind of out of snow commentary, but you walk around this winter and all you see is snow. What’s a blogger to do? I’m going to be walking around, I’m going to be taking pictures, I’m going to be making blog entries. Weather is always changing but the transformation of a familiar landscape made by snow is always more dramatic, always makes a compelling image

Now, we can look back, remember when it snowed. Shoot. I can’t remember snow like this since the mid 90s. Actually, that’s true. We had a pretty severe storm, and a weird one too. Thursday, it was rain and snow, very slushy, a mix that during the evening turned into all snow. Friday morning was all snow and heavy until tapering off by late afternoon. I stayed home. Like a lot of white collar slaves, a-hem, I mean workers, all I really need is a computer so I can mine the salt and satisfy the over-seerer. And, I did actually do work on Friday, but you see this snow, I like to walk around in it. No matter how sick of snow—that time is for comic effect—I might be, I still have that child-like, day off from school, snow-giddiness in me. I was out early, enjoying the blizzard. I don’t have to do any shoveling. Saw a Daily News truck in the snow. Hopefully the snow stopped the New York Post—oh shoot, they’re still both available on line.

The Northeast was devastated by snow says the news on Saturday morning. The same morning a major earth quake hit Chile. Funny, they said the same thing about New Orleans and Katrina. They said the same thing about Haiti and the earthquake. They used the same word. Devastated. I guess the Food Network gave us food porn, and the weather network has amped up weather hysteria. I accept the fact weather is worth talking about, thinking about and being curious about. We need weather information. We need forecasts, we need reporting on the effects. How bad was the storm—17 inches in Jersey City—but cancelled flights and streets in need of plowing—is that really devastating? Is that the same as Katrina. Why does the news—all news outlets—feel compelled to sensationalize weather. Did we have another snow-caplyse like they described the storm earlier in the month. Seriously, comparing the end of the world to weather? Has the world become so drained of real meaning, or is everything so political and partisan that a serious discussion about say, healthcare reform or Iraq policy is completely impossible? Are our attention spans so shorten, our minds so media addled, and as a people have we become so shallow that we need a perpetual 9-11 to focus on and the only thing that can deliver that on a constant basis is weather? I’m sick of snow exaggeration. Finally, an effective usage of the sick metaphor! A meaningful cliché!