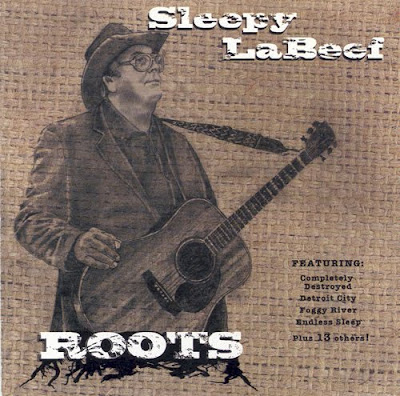 I remember reading, I think in the liner notes to Biograph, Bob Dylan explaining his approach to folk music back in his folkie days by saying he played folk music with a Rock & Roll attitude. Listening to Sleepy Labeef’s latest record, “Roots,” I was reminded of that quote. A self-produced, mostly acoustic outing of energetic covers of folk and country standards prompts me to amend Dylan to paraphrase that Sleepy plays folk music with Rockabilly attitude, the genre in which Sleepy LaBeef is both a master, early adapter, standard bearer and true believer.

Seemed in 2009, a collection of covers, particularly of old country ditties, was a popular album concept, as witnessed by some pretty good releases by Roseanne Cash and John Doe (with the Sadies). With his entry into the field, Sleepy takes a cue from Johnny Cash with his Rick Rubin-produced American Recordings series. Throughout the now five decades of his career, Sleepy covered a multitude of Man in Black songs. Their voices are similar. In fact, as evidenced on Roots, age has deepened Sleepy’s voice, lowering his register to basically the same realm as Cash’s.

Where as Cash mixed up his American Recordings, covering old country songs like “Tennessee Stud” alongside his interpretations of contemporary songs like “Thirteen,” Sleepy prefers old songs. In keeping with the title of the release, he is paying tribute to his roots. Also, while the first American Recording release sustains comparison to Johnny’s Sun and Columbia songs, as the series continued, quality became uneven, song selection less inspired. Gradually, the Great Man’s declining health overshadowed some of the latter entries into the series. Sleepy sounds pretty healthy and avoids those pitfalls. The songs, familiar and unfamiliar songs, are consistently entertaining, with folksy guitar strumming and thick as molasses vocal delivery. In fact, vocally, he may never have sounded better. LaBeef always sings with a palatable sense of urgency, as if he is trying to still make each song a hit.

The recording has a home-spun, do it yourself ambiance, some tracks include a nonchalant Sleepy announcing the number or giving what sounds like recording directions. Sleepy and his wife Linda are listed as the producers. Sleepy is also listed as playing All Guitars, including bass. He also plays the drums. How John Fogerty of him.

In addition to the robust bass quality of his voice, Sleepy’s other distinguishing trademark is the regional drawl, adding to the warmth and invitation of these songs, opening with “Cotton Fields,” an obscure Leadbelly number that Sleepy delivers with southern pride and infectious nostalgia. Cotton Fields reflects on “when I was a little bitty baby.” and the Cotton Fields are the Cotton Fields of his youth, and since he grew up in Arkansas, he probably did grow up near cotton fields. Another song that looks back is “What I’m Worth,” he talks about being “taught the Golden Rule,” before going to school. Clearly, Sleepy is making a personal statement about Roots with autobiographical overtones, not just a musical thesis on what led to Rockabilly.

By just the phrasing of his distinctive drawl, on “Philadelphia Lawyer,” he turns the Woody Guthrie song into a screed against Northern carpetbaggers, a nice interpretation and it’s interesting how comfortable he is signing a straight out folk movement ditty. Nashville Era Country songs like “Detroit City” and “Completely Destroyed” get all folked up. Sleepy has covered many country songs in his career, but always rock-a-billy-ing them up. Here he sings like a folky—and they appear comfortably aside Gutherie and Leadbelly. The attitude may still be rockabilly but most of these songs make you swear you're in the Gaslight on MacDougal in 1961. Sleepy awakens his inner Folkie. He unleashes his inner New Lost City Rambler.
“Sweet Elevina,” listed as a traditional arrangement, is a haunting mountain ballad with Katy J. Anodic adding a distant harmony, reminding me of the anonymous woman who sings on the few songs we have from Blind Willie Johnson. She does the same trick with the more familiar “In the Pines,” always a great tear jerker and Sleepy’s does a very slow and dramatic reading. A fun collection of songs—Sleepy seems to always have a good time when he sings and invites the listener to do the same.

This isn’t so much a relaxing on the front porch type of music, but a camp fire sing along. The camp fire ambiance is enhanced by a few scary yarns. Sleepy goes spooky with “Miller’s Cave”, a saga about murder and romance and possible supernatural goings on in Miller’s Cave, about a girl with unfaithful ways who cheats with a Big Dave and a cave in Georgia with bats and mountain lions. There’s a murder plot involved. Another song, “Endless Sleep”, apparently a long forgotten 50s Rockabilly hit by Jody Reynolds about a teen suicide. After a quarrel with his “baby, the narrator’s girl friend drowns herself in the sea—“I heard a voice crying in the deep, come join me baby in my endless sleep.” Sleepy delivers one of his best vocals of his career on “Foggy River”, a sad yarn with supernatural insinuations about a man who is doomed to “sail this foggy river, until I leave your love behind.” That’s the thing about old folk—or if you are of a mind to, country—songs. There’s a lot of weird stuff going on, and Sleepy relishes each quirky nuance no matter how macabre or outright bizarre.

The spooky campfire numbers fit perfectly with the country gospel songs, which have Appalachian feel here. Religion is always a little scary anyway. Sleepy has never shied away from non-secular songs—find some time his awesome rendition of “This Train”—and here he pulls out “Dust on The Bible,” a classic made famous by Roy Acuff. The song features a narrator who while visiting a friend bemoans the fact he has an un-read Bible covered with dust. “Of all the books and magazines, there’s none salvation holds—wipe the dust off the bible and redeem your poor soul…” You can tell this was a song he likely sang as a youth. Now in his golden years, the pleasure he takes in recording it for the first time is infectious.

The scary campfire religious aspect is continued with a startling song, “Matthew 24,” a song I’ve never heard. The song takes some contemporary goings on and compares them to some particularly apocalyptical sayings by Jesus from the Gospel verse in the title. No matter your religious beliefs, when you hear Sleepy sing in the “I believe the good ole bible,” you can’t help but smile. He is just inspiringly jolly. And in that same thick drawl, he reminds us, “We are surely living in the days he speaks about.” He is having fun with the scary side of religion without putting his faith in doubt, and around the campfire, after singing about murder in Miller’s Cave, some apocalyptical musings can put the fear in believer and nonbeliever alike.

Sleepy seems to espouse a Fundamentalist Christian theology. But, like Johnny Cash, he is more concerned with singing about the Joy that his Faith can give as opposed to Proselytizing. He’s no Ira Louvin. A song written by Linda LaBeef, his wife, “Open Door,” a beautiful, fascinating song, the highlight of this truely solid collection.It has a real folk sound, the subject here is the end days sung by a sincere believer.

“The news reads like revelations,” sings Sleepy. The Rapture is a belief by some Fundamentalist Protestants where at the end of the world, believers will ascend to Heaven. The rest of us will suffer on earth. But Sleepy can’t do anything without humor or a twinkle in the eye. He isn’t sensational or shallow, like a Left Behind novel. It should be pointed out that the details of the Rapture are shared by only a few protestants and cultists. The Rapture as most proponents of the belief define it is far from being a Christian tenet or doctrine. The LaBeefs' Faith is not about the grisly aspects of the end of the world. The song celebrates the ideals of salvation and eternal paradise with a God of Love.

“I can see the Love light shining from heaven’s open door... one day soon he’ll come and get us/sin and death will be no more/I know the day is soon/I can see the Open Door.”

The narrator sees that the end of the world is the metaphysical portal to Heaven—the unending love of God. Sleepy is actually articulating a profound mysticism. Fundamentalist Christianity has gotten a bad rap these days. For the most part, this reputation is deserved. The mean spirited born again rhetoric that has come out of Christian Fundamentalists in recent decades is not the love preached in the New Testament. Their hatred and prejudice contradicts all the teachings of Jesus Christ.
Sleepy alone may not be able to reestablish the good name of Christian Fundamentalist. Who could in the wake of right wing freaks like Falwell and Roberts? But, at least Sleepy takes a step in the right direction, He celebrates the joy and mysticism inherent in the Great Awakening, before the hucksters and politicians took over.

The collection ends with “Amazing Grace.” I just love this song, no matter who is singing it or no matter how many times I hear it. Sleepy wavers some here, the urgency in his voice unsteady. He’s probably sung this song since childhood and it’s a pretty difficult thing to do such a well known anthem justice. Sleepy has been making records since the 50s. The man is in his 70s now and for more than half a century, Sleepy has kept Rockabilly Alive—country-fying Rock & Roll and Rocking the Country. At this stage of his career, he explores his “roots” but he also tries something different and very innovative, an admirable move by any artist.
Sleepy may never have made the big time, but he sure has been persistant. He’s a man who knows his art, and his mind. He is determined to deliver entertaining music; he fights the good fight. One listens to this record with admiration and grateful amazement. In Roots, Sleepy convinces the listener that camp fire sing alongs, folk music classics, country favorites, murder tales and Revivalist Meeting Hymns are as much a part of his influence—and by extension Rock & Roll—as the Sun Sessions. What you hear in his “Amazing Grace” is a sincerity about both his Faith in God and his Faith in the Music he has made his life's work

Roots should not be the first Sleepy LaBeef you buy, but this record illuminates his entire oeuvre.
Posted by Mr. Tim Hrk at 2:10 PM