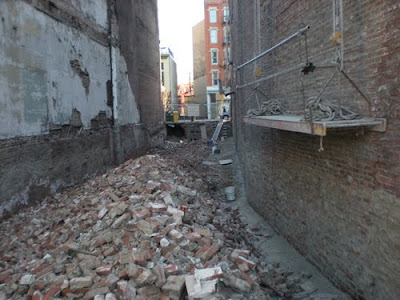 A big ole pile of bricks. It’s a lot of bricks, in an empty lot, which is really a pit, isn’t it? A fire destroyed the building so it had to be demolished. They’re working on the adjacent Building, which is where these bricks were removed from. Guess they’re bad bricks, didn’t make the cut. Who knows if they can be restored to a useable form. Who knows from bricks? I wonder if there is a ton of bricks here. Enough for a shit house?
Posted by Mr. Tim Hrk at 1:42 PM