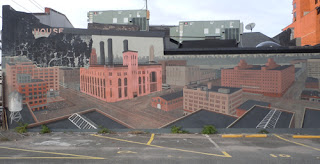 Okay, there is an irony. The idealized city scape captured by this mural has been blighted just like real cities in decades past were inflicted with urban decay. The truth though is tragic, this wonderful mural, on Marin & Bay, which was painted by Thomas John Carlson, head of the JerseyCity Art School, is slowly rotting away.

I love this mural, written an analysis here and some progress reports here and here. Besides the remarkable composition – Carlson has an extraordinary knack for symetry and balance – of the images as well as the subtle use of muted tones and light, what I like most about this large painting is the prism effect. Outdoor murals tend to be invocative; e.g., invoking a memory of how things used to look, thus reminding those living in a city of our connection with the past, or they invoke a fantastic piece of imagination, the juxtaposition surpises. Carlson’s mural reflects the immediate environs of this building, which is the Power House Lounge and the environs of course is the Power House District, the transition neighborhood where Downtown  becomes Newport. The cobble stones streets, the warehouse and factories, the light rail, are all in this diorama, but the more you look the more see, gradually realizing it is as much a reproduction of place as it is a perception of place. If I am nearby I make a point to pass this lot so I can look at this mural; I am sure I'm not alone. It's a brilliant piece.
Well, might want to go by there soon because it is literally falling to pieces, slowly disappearing before our eyes. A significantly large patch, I reckon about 20 percent of the painting is now gone. The building's exterior has fallen off, it’s not just the painting chipping away, but the surface of the structure. In parts of the painting still there, very visible cracks are spreading like thick spider webs.
I asked some folks working in the lounge about the mural’s decay. They were real nice, I spoke with the owner or manager, and he honestly felt bad. He told me that it was either the weather or the vibrations of the music, the thick bass, or a combination of both. When I was there bass-heavy techno type music was on the sound system, although it wasn’t too loud where you couldn’t hold a conversation but it is constant when the club is opened. Of course, another vibration could be coming from the even more constant traffic, which includes trucks, down Manila. It could also be a combination of the climate and the noise.

Anyway, he isn’t sure what will happen. No one knows if the damaged area can be repaired then repainted,or if the entire exterior must be replaced and a whole new painting done. At least he wants to make sure the side of the building features art. It will not be cost effective to do anything until after the winter, he said. You could tell he felt bad, he appreciates what a special work of art Thomas accomplished here.


It’s heart breaking. Maybe it’s time our art friendly town starts paying some attention to preserving these fantastic and unique pieces of urban art. Look at the north side of Columbus twixt Barrow & Grove, the splendid diorama of Jersey City icons (Statue of Liberty, Colgate Clock) has become an eyesore, paint chipping away, construction projects removing entire panels of the painting. Of course it didn’t help one of the buildings burned down.
These murals are part of the community. These images should not be abandoned like chalk marks in the rain; they’re part of the architecture. They enhance the scenery of our daily lives. Art elevates. There simply seems to be no thought given to preserving the work. I’m not saying Power House is at fault; the folks there couldn’t feel worse and what is happening on Marin & Bay was unexpected. Not only is it sad, but frustrating: we have to wait and see how bad it gets before something can be done.
One hopes at least parts of the Carlson Mural can somehow be saved. One hopes our art friendly town takes it as a warning and learns a lesson. Art needs to be preserved as well as made. 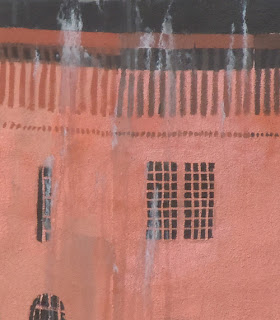 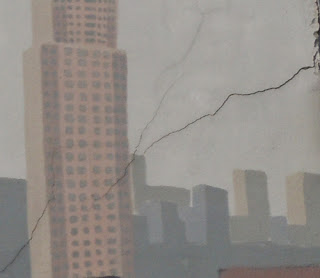 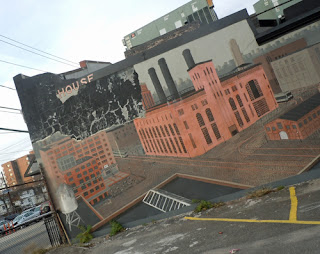 Something that used to be 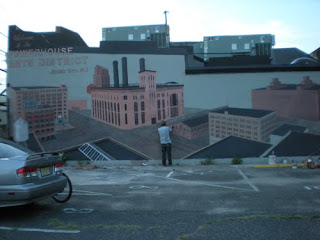