The Light Rail of Perception 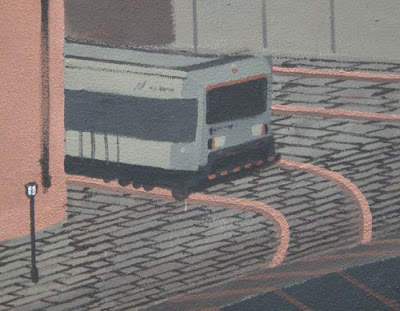 I see that Light Rail coming, ready to roll around a bend, on the mural at least. I happened by again this mural in progress and noticed this clever addition.

Look, a train a coming on the mural by Thomas John Carlson

I love the Light Rail, the real Light Rail, a future is here futuristic version of a trolley or street car. I love how it sort of zips through the cityscape perimeters of Downtown. When the train traverses through the newly christened, Power House District, it darts between the old factories and warehouses, remnants of our industrial past.

In the mural, the train emerges near a building, approaches a curve in the track. The positioning of the image suggests movement and enhances the 3-D feel of this painting. But, the tracks in the cobblestones in the real version that this mural depicts are no longer working. They are not Light Rail rails. The tracks in the cobble stones were for real freight cars, when these industrial buildings were providing jobs and performing the functions for which they were built. New rails of course were laid for the Light Rail, but the Light Rail is not routed where these buildings are actually located. It looks so real, but the reality is, it is perceived. The Light Rail goes by these specific buildings in this specific route only in this mural.

The real versus perceived dynamic of this mural creates a subtext. I guess all murals are merely large paintings, realism in the sense that they represent a scene or at least images that occur in our world. The subjec of this mural is unique: the immediate surroundings of the building, which is scheduled to be a lounge, a fancy 21st century name for a Gin Joint. The viewer on some level realizes, hey that looks familiar, those are the buildings and Light Rail I just passed by to get to the bar in this building that also serves as a canvas.

I can’t recall another mural that intends to be a mirror—the one on Christopher Columbus invokes our city on the Hudson , it makes no claim to appear to be the actual waterfront.

Here’s the clever part though, there is no exactness to the re-creation. It may resemble a mirror, but it is not a mirror. Not just with the wiggly lines, an illustrative style that slightly exaggerates the buildings, streets, etc, but the fact that this mural is a perception of the area. The Light Rail route is no where near that loading dock, those mural buildings are not next to each other in the real district. The fact they resemble the nearby world the first assumption is they are identical to the real world. But in fact, it is a perception of the real world.

Is it real, or is it perception? I don’t think some kind of statement about art and life is being made here. However, with the mural being literally amid its subject matter, the viewer can’t help but notice the amusing contrast between art and life, thus contemplate the concept of perception.

It’s entertainment on the subconscious level. Why? Because in the end, we may know there is, but we can never truly prove, there is a world beyond—or in addition to—our perception of that world. (Maybe that’s why some believe there’s math, it is the only true objectivity).

I don’t think the picture is done yet, because I haven’t spotted Waldo yet. 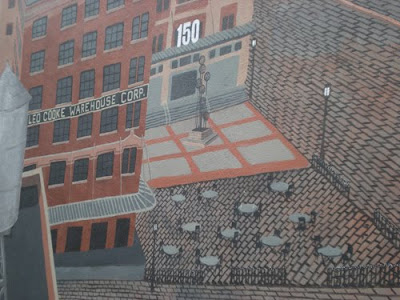 Look at this building in the mural. What a nice patio, with tables and chairs. 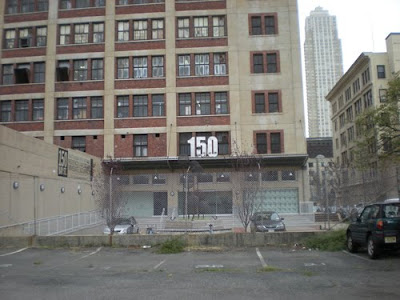 As I walk out of the parking lot which is in front of the mural, I look to the left. There it is, the artist’s model for a new part of the mural, still holding its pose. Emote for me 150! That kind of weird metal sculpture is there, but where are the tables and chairs? That nice patio exists only in mural. It is just perceived; but it looks like it should be real. Hey, it’s more upbeat than cubism!