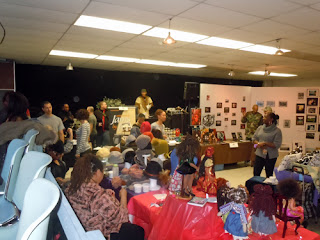 Art met commerce long ago. They continue to collaborate. ArtFest, an event held at Art House, which is near Hamilton Park, added a heavy dose of urban community to the equation. 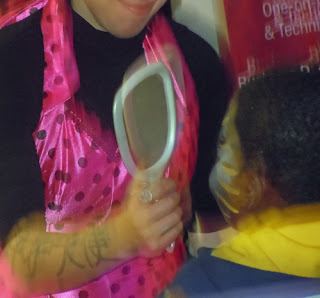 The event was sponsored by Rising Tide Capital, a non-profit organization that encourages entrepreneurship among minority and under-privileged population. Jersey City art events are often multi-ethnic and kid-friendly, but this event was especially fun. There were vendors aplenty, mainly artists and artisans selling hand-made crafts. On one end on the room was a six-inch high stage were musicians and rappers performed. To the side of the stage face painting was going on and by the time I got there, late in the afternoon, seemed all the children already resembled a pre-school production of Cats. 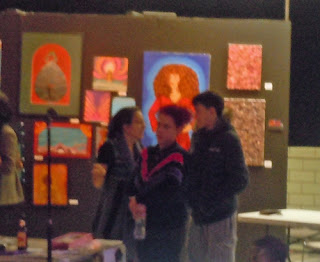 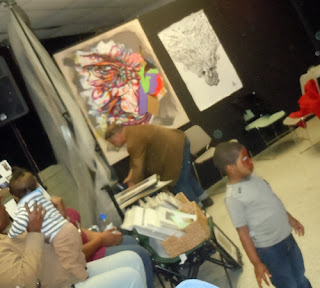 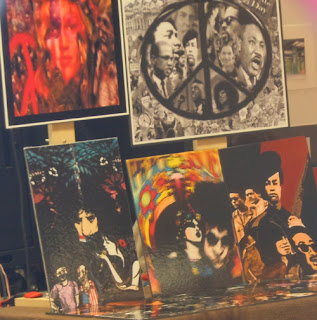 A genuinely enjoyable urban vibe. I noticed that a lot of the contemporary African-American arts and crafts for sale had a Soul Power, replete with psychedelic influences, feel. Very groovy (I mean that sincerely and ironically). I remembered seeing that stuff when I was the age of these kids. Back then it scared mainstream society (i.e., my parents), but now IT IS MAINSTREAM! Well, as mainstream as the Hamilton Park neighborhood gets and let’s not kid ourselves, it’s more mainstream every day. Does mainstream really have the same meaning in our media-drenched, fragmented society. What used to be underground culture is now the culture or a good part of that culture. Let’s welcome that

I guess rap and hip-hop can be considered the same way: an underground phenomena that is now acceptable. I’m not a hater of rap, but I’m not a fan. I have nothing against it, I usually find it very interesting, but a little goes a long way. It’s just not part of mypersonal soundtrack.

At ArtFest my opinion was deeply challenged, and I bought my first “hip hop” CD (that ain’t no lie) Busy is My Best Friend, by Silent Knight who performed with Soul Q’Lock. Seriously, these cats were fun to hear, fun to watch. They reminded me of Jay and Silent Bob as they shimmied and wobbled and did the hand gesture thing. At one point Q’Clock wiggled his fingers in front of his face and S.K. waved both hands I love those hand gestures, I guess they are derived from gang signs. What an affable duo. Peace Out! Representing. It’s fun and infectious no matter who you are. The perfomance entertained on a mulitude of levels. 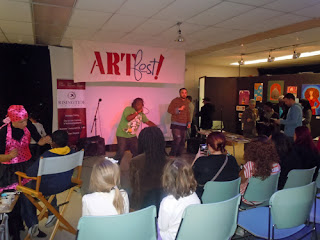 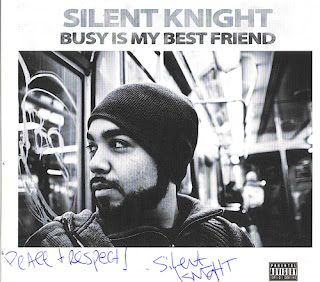 The song that caught my attention though was Stayin’ Busy. Mostly, rap songs, even the classic ones, often sound to my ears like run on sentences in search of a rhyme. Entertaining, sure but all too often at the expense of craft. Sometimes the cussing, sexism and homophobia can be a distraction. These guys did not dabble in that sort of thing – there were kids present!
Stayin’ Busy is about a guy determined to make his art, regardless of how his friends feel. He’s “straining to sustain” sleeping on couches, staying up all night at the computer.
The narrator is cognizant of the potential and ever-present threat of his urban, working class environment:
“One check away from being on the streets/Or my peeps who are there one check ago.”
What a great couplet, brilliant alliteration. I love the internal rhymes of Street and Peeps. It’s a great song or rap or, well what it is closest to is Spoken Word, even with the beats and musical effects. But those are just classifications to make it easier to write about. I listened to the CD, this song especially. It’s like a mini-opera, a personal tale of struggling to express an artistic vision, not just against the odds but also of personal sacrifice. The rap begins with a phone call where he explains that he is too busy, at another point he dreams of his girl “in those jeans.”
The finale is a call and response with the chorus line:
When you’re trying to see your vision through the final extant
Busy is your best friend
When you’re hoping whatever you’re going through would just end
Busy is your best friend
Throughout a woman sings: There’s a limit to your love.
A haunting reminder of the price artists often must pay. Inspiration is a cruel mistress. There’s an ambiguity too: is the narrator escaping the tribulations of life by staying busy or is him staying busy the real cause of the problems? It can go either way; what a provocative song, rap, poem, whatever! (I’m making a hand gesture to emphasize my point).
Anyway. I’m not getting on the hip-hop/rap band wagon, but this was well-crafted writing, an attention to iambic pentameter which is just a fancy way of saying deliberate amount of syllables within the lines, which were long-breath lines, to enhance the rhythm of the writing. It wasn’t just the pre-recorded samples giving this material rhythm, it was the writing itself, attention to the sound of words as well as their meaning. The dude has something to say and an original way of saying it. His CD was worth spending some time with; my player isn’t sick of it yet!
Check out his website. 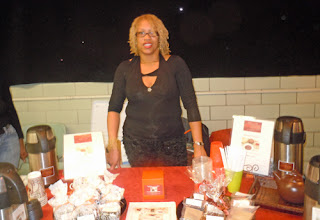 My favorite Art Fest contribution to the Jersey City art scene. Tea! I’m a devout tea drinker and there was an honest to God tea vendor, “Taking Tea In Style.” They were selling by cups and bag a quite good Coconut Chai.

Do you drink Chai, asked Sharon Levy, the owner.

Only every morning, I said.

I never drink coffee. I drink many cups of tea a day; I’ve gotten a bit particular and brew it fresh. I am a tea head.

You can get booze, water and coffee at Art Events. But heretofore never tea, especially the high quality tea which I have come to prefer. Apparently Tea In Style is based in Princeton; It’s all fancy tea stuff, but also a selection of gourmet teas. Anyway, I know my chai and this was quite delicious.