This wonderful, I am assuming new, mural is on Brunswick Street, somewhere north of First Street. 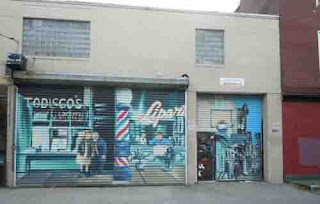 Murals are blooming everywhere in Jersey City and I make note when I feel the urge. This mural is a growing trend of Storefront Gate pictorials, ranging from a clever advertisement for the business, the gate is securing to an art for art sake picture, such as this dramatic gargoyle.

Maybe mural is not the right word but I can’t think of a more appropriate term for this large canvas diorama. The colors seem muted, yet they have a vibrancy without any brightness. The style seems like Edgar Degas meets Edward Hopper, impressionistic, yet illustrative, a little lonely but human, touching, wistful. 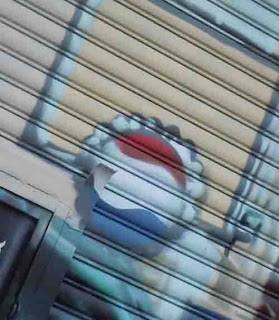 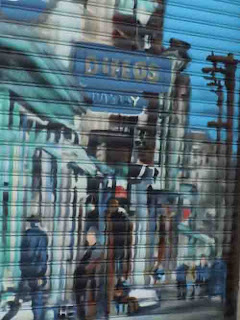 A friend of mine, born and bred J.C. person also noticed this painting and clued me in – that’s the old neighborhood. I have no idea what business this gate is in front of now – I took the picture early this morning, most businesses were still closed – but the store fronts depicted -- Todiscos, Lipari Barbershop, Difeo's Pastry – were the actual stores lining Brunswick street back in the mid-to-late 20th century. Even the giant Pepsis bottle cap – which can still be seen on this street – is accurate to the bygone era. Notice how the real door is used as a faux corner and the mural on the right hand sided gate changes its perspective, creating a sense of distance, objects getting smaller, recreating the look of a street corner, bringing the viewer into if not the painting itself, the idea of this depiction. Notice also the tan portions near the top, how the shade mimics the actual beige façade of the building, resulting in a momentary illusion that this work emerges out of the building and is not really a paneled security gate. The ridges of the gate seem also to enhance the shimmering effect, of the colors, the soft-focus impressionism of the style and the fading nostalgia of the internal narration of the actual depiction.

Blurred on the edges, colors fading with every blink of your eye… that’s the way memories look in our mind. Like one of those dreams where you are in a place that used to be, everything is familiar, but as you recognize identifiable landmarks from your past, you also are waking and soon the whole era evaporates. The mural may be of the past, but the sweet if melancholic emotions invoked by the high-level of art here is undeniable 21st Century Jersey City. Memories can inspire our imaginations and feed our dreams. On Brunswick Street, they don’t have to be yours. This beautiful, highly imaginative work of art expands on the past that is collected in our collective memory.
﻿ 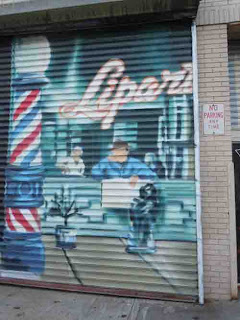