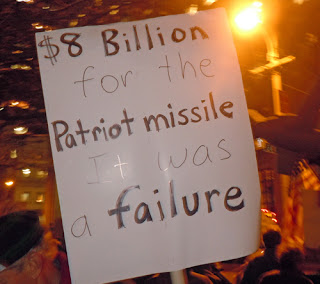 Occupy Wall Street occupied Madison Square Park Monday night, I believe that President Obama was in town for a fund raiser nearby and this was a protest in his honor.
Flags were waved, hand printed signs, ubiquitous and provocative, a few drummers backing up a rousing: “Stop the War, Tax the Rich, we don’t need no deficit.”
This demonstration had more of anti-war emphasis than general OWS actions. I prefer the economic messages but cutting military spending I’m all for. I haven’t been down to Zucotti park in a few weeks. Bloomberg ordered his police force, under cover of darkness, in the wee wee hours, to remove the tents. Basically he took away their constitutional rights to free assembly. It was a shameful act. 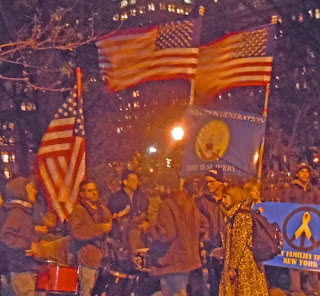 A few dozen protestors, cross section of ages. The movement is changing the debate. These issues simply weren’t being discussed before and they are now, not to the extent that is needed, not to the extent that will result in policy. But the start is here. A friend of mine a couple of months ago talked about how consciousness has to change then the politics will follow suit. He’s from the 60s; I am not. I thought it was just recycled 60s leftism, inapplicable to our current state of affairs. I think I may be wrong. Consciousness is changing. We are so comfortable with expecting instant gratification; we live with perpetual impatience. But sweeping change is needed and I’m beginning to feel that more than a single election will be required. Yes, I fear a Republican president because Mitt & Company are scary, incompetent monsters, but even a second term Obama will not be enough.
The last day of November, OWS is not going away. Everybody passing through the park at the moment was thinking abut the issues and thinking about differently, or at least thinking about thinking about them differently, than simply hearing them discussed on the news. They were waving flags. This movement is indeed, America. 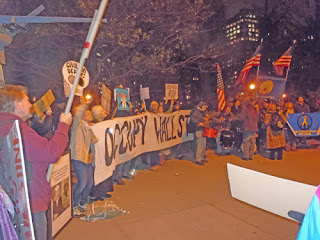 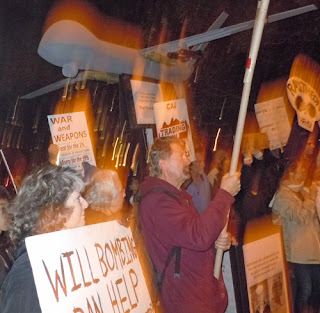 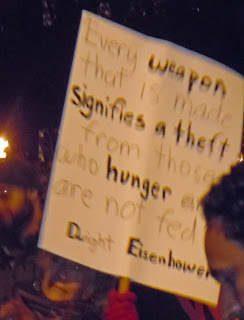