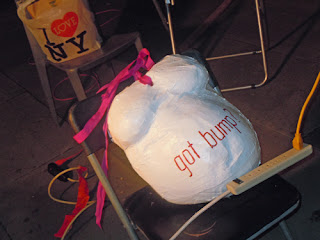 Baby Bump. When it comes to slang and English, no nation is more compulsively inventive than the land of the free and the home of the brave; this predilection has been turned up a ba-zillion notches by our current crop of texting Americans.
Think of how demur we used to be – You’re showing. Lucy & Ricky couldn’t even say Pregnant, back in the day when toilets couldn’t be shown on screens big or small. The base side of being human, the inescapability of nature on our lives, somehow got intertwined with sin and guilt in Judeo-Christian, Western culture and it’s taken several centuries, not to mention Ginsberg & Kerouac, Heffner & Flint and Howard Stern, so that now we can finally dare to speak the names of the our various calls of nature.
Maybe the culture can go a little too much the other way, glorification in the crass, but for the most part this honesty and lack of embarrassment over universal facts of life is positive, a vast improvement over repression. We cannot not only say pregnant without second thought, we can coin a new phrase for the today’s mommies-to-be. Baby Bump. Bling of Flesh. Motherhood is in.
Last summer or the summer before, a real hot day, I saw a pregnant woman on the subway wearing a midriff blouse, her womb and enormous navel swelling in the open air. It was shocking and beautiful at the same time. I can hear the old guard bemoan the lack of decency but in fact, decency when it comes to social mores has been redefined, for the better. Social custom used to force women to disguise their “condition,” during the Victorian era a woman with child rarely left the house. Now Baby Bumps are flaunted. In Your Face Fertility! 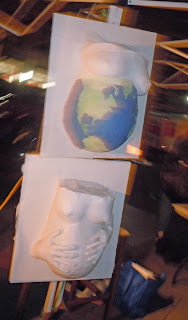 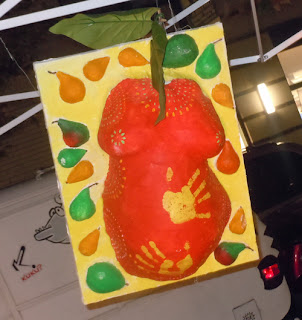 This Baby Bump Series were by Laura Dejean, a co-founder and regular vendor and organizer of Creative Grove, our fair city’s Friday Art Mart & Flea Market, where these pieces were exhibited and on sale. Some were self-sculptures of her trimester body. The obvious comparison is to the Death Masks, where plaster was placed over the face of the deceased at the moment they became deceased, creating a sculpture of their face of death. This is the face of life. But the Death Mask was just about the surface, the facial expression. This is about what’s beneath the bump. The Womb, the fetus, the source of all life. Nature devastates and nurtures, it is logical and a contradiction, the mystery and miracle of life. Science, Medicine, biology, they really only tell us so much.
The sculpture with the Got Bump, a funny take on Got Milk and bump always comes before milk is filled with foam and you put it on to feel what it is like to be pregnant. But who can feel the inexplicable? That one had fun with the Baby Bump current coining of phrase, but the others echoed other motherhood themes – fruits of harvest, mother earth and one with men’s hands embracing from behind the bearer of his children.
Posted by Mr. Tim Hrk at 4:52 AM