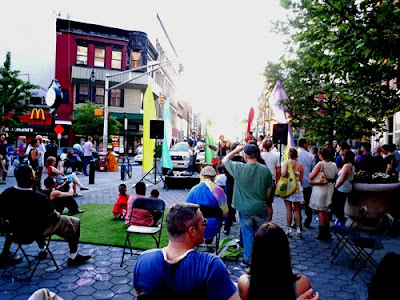 Although I try to catch most Groove on Groves, I resist blogging about each one because I hate to get in a blogging rut. So, the weather turned nice and I got back home about six after a grueling day at the day job and had ten pages left to finish on the rather great book I was reading (if you must know, Mailer’s Tough Guys Don’t Dance, brilliant by the way). I missed most of the opening band and there was some bicycle riding demonstration and I so I read and drank some tea and enjoyed the late afternoon sun as the second act came on, Radio Galaxy.

They opened up with some ragged retro country rock sounding ditties, pleasant but nothing special. I was on the periphery, the music on background and in near Jungian piece of synchronicity and I finished the noir, processed its foreboding filled ending, the band went into Dolly Parton’s immortal classic, Jolene.

Jersey City is filled with chatter boxes. Why is it so impossible for so many people to stop talking and listen to music. Are we so self-absorbed as a species that the only we can prove our brains work is we blab everything that appears in them? Don’t answer. I’m trying to avoid depression.

While I’m on record encouraging young musicians to write their own material, when a bunch of kids attempt a classic, the effort should be applauded no matter the result. In this case, however, this cover shifted their entire set. Jolene revealed a new momentum, getting better and better as it gets to the killer moral of the story -- don't take my man away just because you can. Jolene was followed by a serious of hard-rocking, blues and soul inflected originals. I moved from where I was to get a better view and better audibility, eventually migrating to the chairs in front of the stage.

Apparently, and I might have this wrong, the core of the band is the lead singer, Virginia, a waif of a gal with the robust pipes of a Bessie Smith, and her brother who plays rhythm guitar and co-writes the songs with her. The lead guitarist was having an amazing set, really talented cat. Glorious stuff. 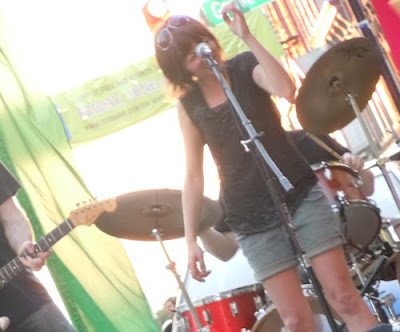 The final song, which had a refrain about locking the back door, started off with a reggae lilt as the main riff and culminated with searing guitar and Virginia holding notes for longer and longer times. I gasped with delight, they were great and she is a highly talented paradox: how can such a big voice, filled with range, come from a woman this petite?

Most everybody finally shut up, listened and grooved with the band. A GOG rarity. The well placed cover shifted their set, cohesion was enhanced, several genres blended. The crowd was won over. What a fantastic set!

Check out their myspace page:

According to their myspace page, they were once voted “the Best Original Band in Morris County.” Bon Jovi eat your heart out! In your face, Jonas Brothers!
Posted by Mr. Tim Hrk at 8:01 AM