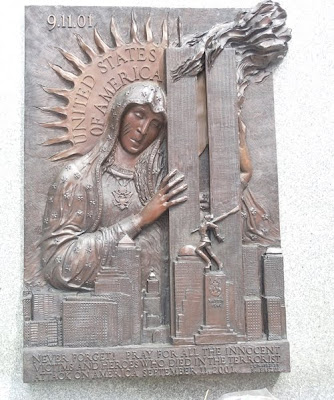 Life is weird. Coincidences occur sometimes with such consistency that you have to wonder what determines your measly thread in the fabric of existence – is everything fate or is everything random? Sometimes I think that dichotomy is a false one, yet even that declaration only implies the ignorance inherent in the dichotomy. We are ignorant of the information required to answer whether life is fate or is it random. Maybe, in the afterlife, when we attain ultimate consciousness, we will finally understand that randomness and fate are not mutually exclusive, they are in fact synonymous. As is often the case, especially when it is nice out, I go for a Sunday afternoon wander and more often than not, snap a blog pix or two. Heard there was a ceiling collapse at one exchange place, so I took a walk to the river which I don’t often do, because it reminds too much of the days of 9-11.

For the first time I noticed this addition to the grim Katyn statue in the wide pavilion of our always fledgling financial district. This garish, dioramic work of a weeping Madonna cradling the just before collapsing towers of the World Trade Center was installed a few years ago, somehow that passed me by. I thought about some commentary. A few hours later, after watching the fascinating film Salt of the Earth, followed by a proactive discussion at the J.C. Art School’s Sunday Film Forum, I come home to hear the news: Bin Laden has been shot.

Just as I was pondering whether or not this sort of bizarre artwork is an appropriate response to this national tragedy the perpetrator of that tragedy—not to mention the east African embassy bombings, the USS Cole, Madrid and London subways, the Bali disco and I’m leaving some out – was finally killed. I hadn’t thought about 9-11 for a while, until I saw the Madonna and on that same day a major update to that event occurs.

When I saw the reports of the flag waving and other bravado, I felt weird. I could understand that response, but it wasn’t mine. Granted, it rarely is. I was born without a frat boy gene.

I wrote this on my Facebook status: Why this American urge to treat every political event like the Super Bowl? I’m in no mood to celebrate. Too much blood has been spilt, too much heartache, too many lies told, too many mistakes made. I’m not glad but utterly relieved this evil man is dead. An era has ended. I’m praying the next era is better, that the dead will rest easier, and we give peace a chance.

I was thinking about 9-11 that day in one way, because of noticing this new inset on our grim Bayonne in the back statue and now that night, I was thinking about it another way. I’m not going to repeat the stuff I’ve been hearing on the news, but I will offer what I hope are a few sort of original takes.

President Obama: “Shortly after taking office, I directed Leon Panetta, the director of the C.I.A., to make the killing or capture of Bin Laden the top priority of our war against Al Qaeda.”

So basically it took two years as a top priority. Where was it on the priority list for the seven years before he took office? If it took an additional two years, one wonders if it was even in the top 10. Historians will want to know why the Bush II administration did not make it a top priority for the CIA and what was the top priority?

Al Qaeda and Islamic terrorism will be with us, but I don’t think you can over estimate the loss of Bin Laden to his movement. He had charisma. You didn’t have to speak Arabic to get that. His appeal, his attraction to fundamentalist Muslims is tangible, and that charisma was clear even on poorly produced videos or scratchy audio. The low tech messages secreted out of his undisclosed location – which in truth turned out to be a Mansion next to Pakistan’s top Military School! – only enhanced his allure. You don’t replace that over night.

With most movements, when a leader who looms as large as Bin Laden did for Al Qaeda dies, so does the movement. Not that it will disappear, but it is a crippling blow that a movement rarely recovers from, certainly rarely recovers fully from. Do not underestimate the power of a charismatic leader.

The only thing more powerful than a leader is an idea and the way our President handled this situation, and indeed, has handled the Middle East – save for one so far glaring flaw, the Israel Palestine conflict – has been pretty good. He aligned our nation with the people during the uprisings in Egypt. Tunisia, Libya and now Syria – and you have to stand with the people – the draw down in Iraq seems to be going well and Afghanistan, well at least it ain’t getting worse. Assassinated, a burial in keeping with Islamic tradition. Every thing minimized any glorification of this evil man, so his followers are only left with his legacy and his philosophy to tout.

Nihilism is hard to proselytize, and I do not see how his philosophy can be seen as anything but. Indeed, so far the Arab Spring is Muslim in character yet eschews any fundamentalist caste. What part of Bin Laden’s vision included fixing roads or creating jobs and giving families a quality of life, which appear to be the issues fomenting the Arab Spring? It’s a different era in the Mid-East, and all indications are that Bin Laden’s time has indeed passed. Democracy is messy and imperfect. Change and social stability requires coalition building which means compromise. History and human nature suggest that the impulse is to take away rights of fellow citizens before you are willing to sacrifice rights of your own.

Fundamentalist Islam (or other fundamentalist other faiths), especially the nihilistic vision of Osama Bin Laden, doesn’t seem to have room for the sort of give and take democracy requires. Those young people pushing for more freedom and better quality of life during this Arab spring understand this or at least seem to or maybe I wish a majority do. I’m hopeful. 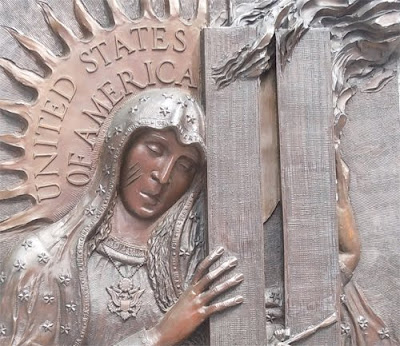 Oh yeah, the Madonna. The look of this work is like a midlevel triptych, it tells a story and the imagery is slightly out of scale. It’s so garish. The American Eagle Pendant around the Madonna’s neck is in such bad taste that the shock itself entertains. The Katyn bayonet in the back memorial is in the foreground and it looks like the river is gone and this is an enclosed 9-11 world, as if the memorial and the twin towers contained the entire tragedy.

During the days following the attack it felt like that, as our city braced for victims that never came as the smoke from the wreckage billowed in thick, angry columns in the late summer heat. The memorial is on the same ground where the Dutch massacred the leni lenape, initiating a genocidal war that managed to remove almost all of these New Jersey Native Americans from their homeland before the American Revolution. The Madonna wears the long shawl of stars that is the traditional garb of Our Lady of Guadalupe, the only Apparition of the Virgin Mother in the Americas. But I wondered about the three gashes on hour cheek, was there a grappling with a tiger story I was unaware of. No, that’s the Black Madonna, Our Lady of Częstochowa, the famous icon and of course the namesake of one of the oldest churches in Jersey City, only a couple of blocks away from here, and a nucleus of our city’s long standing Polish Community. More than just synergy.

Something about her face and the way her left palm rests against the towers that is erotic. Her face shows sorrow, but there is something post-coital about it, satisfaction and sorrow that follows the little death. The smoke seems to ejaculates from the erect towers. I’m not being blasphemous or flippant. Scholars have pointed to many depictions of Mary and other female saints (A famous Saint Agatha if I recall) are known to have the visage resemble the face of a woman in orgasm. It is not unsavory, but it does unsettle. There’s something unsettling about this Mary and it’s not just her garishness. Maybe the garishness and the subconscious sexuality empower the overall narrative of the work – the sorrow and patriotism we shared, the yearning for spiritual comfort our grief inspired.

I don’t know why there were flowers. Left over from Easter? Some celebration related to the beatification of Pope John Paul II? I don’t know.

This blog is one of the weirdest ones. I thought it would just be a throw away, and it still is most likely. But what made me walk by here, notice this Madonna caressing the towers that are no longer erect, a united states halo around her head on the same day Bin Laden is executed. There is no answer here. There is no answer to life except life, and when it comes to history a life is only a glimpse 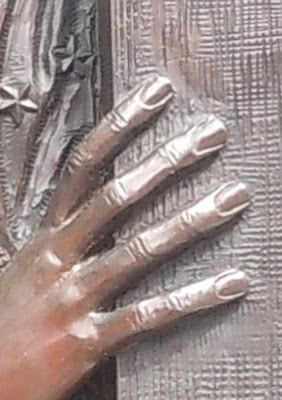 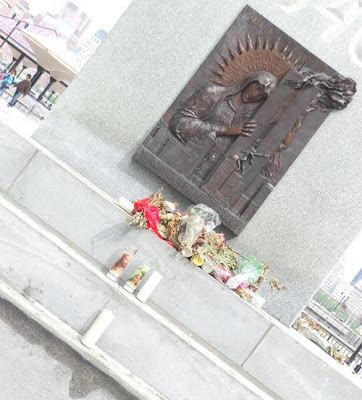