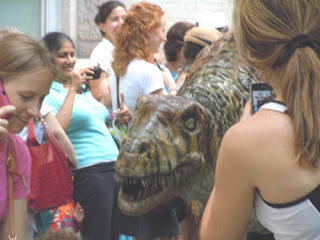 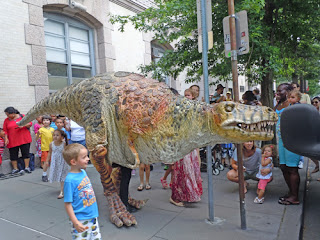 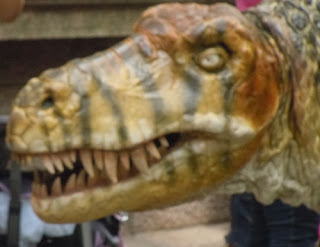 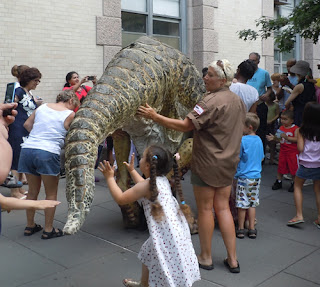 You know how the old timers, the born and bred Jersey City folks say how they remember Mayor Hague or Rail Road Avenue or when the Jersey Journal cost a nickel? Just think, in a few years this as of yet unnamed generation can boast, I remember when Dinosaurs roamed the streets of Jersey City.
Kids were gathered at the main branch of the library on Jersey Avenue for a promotional appearance of a raptor, or is that raptorsaurus, I can’t remember; it’s been a while since I’ve seen Jurassic Park and I haven’t seen that new stage show. According to the postcard given out, this is a “life-sized Animatronic Dinosaur” part of the Field Station: Dinosaur, the newest attraction Secaucus has to offer.
It’s a guy wearing a big rubber dinosaur costume. Today was the first day of the Heat wave and it was in the 90s by the time this promotional-a-saurus arrived at the library.  The childred were delighted, many scared. It was fun. They got out of the way of the lumbering facsimile, which made a very unsettling moan, a cross between a bird’s coo and a cow’s moo. Kids scream loud. But as the dinosaur teeter-tottered about on the sidewalk, its rubber skin being petted and the black tights of the performers legs visible – the rubber dinosaur leg and floppy clawed foot were barely attached to the actor’s limbs, the screams died down, the fear subsided. Kids were trying to look into the ears, into the mouth, to see the human within the creature. With the sun beating down and the humidity literarily leaving one breathless, everyone was thinking, it must be hot in there.
The hordes of children still following, although now their laughter more closely resembled that of the parents, guardians and other adults.  The attendant, dressed in a brown zoo uniform shirt, straight out of Animal Planet, had to urge the children, at first hesitant to get near the dinosaur,  to now stop crowding the rubber beast. Time to get back in the truck and go back to Secaucus. 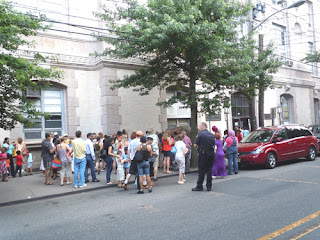 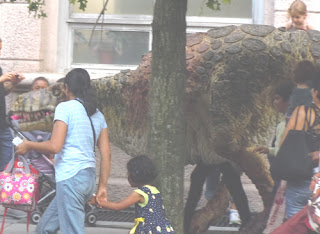 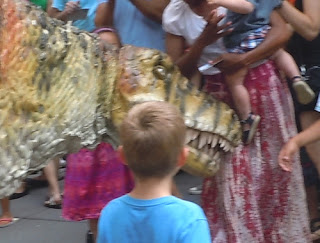 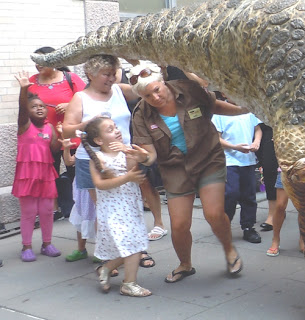