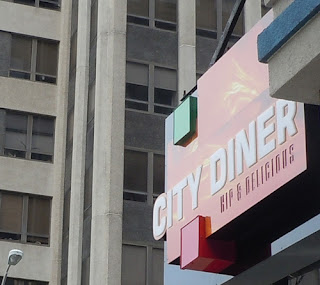 This sign is not a good sign as sign though I hope not as omen. Hip & Delicious. The most unhip action you can take is declare yourself hip. Everyone who is hip or knows what is hip knows that. Probably the same is true for delicious but not certainly not as true as it is for hip.
Now, the diner it’s replacing, Flamingo Diner, a 24 hour classic Jersey Diner, that was hip. It was also sort of grimy, the bathrooms were graffiti ridden monuments to disgustitude, and the food was pretty, well nothing special. One time I was served a mushroom omelet with cardboard in it; another time I had a spinach omelet that was gobs of spinach on top of scrambled eggs. The breakfast sausage was great. As my diet got healthier I didn’t go there so much – and I never really went there on a regular basis – they never contemporized their offerings. If you are worried about carbohydrates or high cholesterol, you really couldn’t get anything to eat there. Most diners offer some healthy options – at least that’s what the menu implies – but the Flamingo Diner – technically as their sign said, Flamingo Restaurant – never caught up with current nutritional opinion.
The atmosphere though, was old time Jersey City  until it closed. The waitresses had been there since the Lenne Lenape Massacre. They were always nice and friendly, almost out of central casting. They made up for the food. Year or so would pass by in between visits; the same waitresses would be serving. One had a Greek accent, another thick Jersey accent. There were more than two  waitresses, but those were the ones I remember. One time the Jersey accent was screaming that the new dishwasher had stolen money, looked at her funny, waved a knife at her.  I didn’t see a knife, she just claimed there was one. She made this loud spectacle, but she was genuinely angry and scared. The guy came out from the back, shaved head, he had one of those skulls that you could make out the bone plates, his skin as thin and tight as saran wrap and brown eyes the size of ping balls. He looked very scary. He denied everything. One of the other chefs, an older man – I had seen before, perhaps an owner – ordered the dishwasher back in the kitchen, others were trying to calm down the Jersey accent waitress, who was weeping and wailing at this point, yelling how she worked here for 20 years and this is how I’m treated!
That was a lot more fun that cardboard in an omelet. It was also opened 24-7, which I wonder if the new place will be.
About 10 years ago or so, the place was going to be zoned out of existence. All those tall, aesthetically offensive and heavily tax abated buildings down there by Exchange Place were being built at the time and they needed wider streets for all the cars expected. It was before the housing bubble burst, residents were encouraged to drive and own cars and commuters to financial district jobs had few mass transit choices. There was an outcry, don’t close our diner, the only affordable place to eat – the Flamingos had to be the cheapest diner I’ve ever been in – and the outcry worked, the Mayor – was it Cunningham at the time? – interceded. Well, it was a major kerfuffle, I forget all the details and I am unable to do the research.
It has to be over a year since The Flamingo closed. There was sign about we’re renovating, will be open in three months, but that deadline passed, then another month, another month. It was apparent no construction was no longer taking place. Eventually construction was revived, saw a coming soon sign and now this official new marquee. City Diner.
So maybe saying your Hip is the new Hip. Society is so ironic that might be an example of the post-ironic era we now find ourselves in.  I hope they keep prices low but probably the best to hope for is comparably low – not to other diners, but to all the fancy eateries in Exchange Place. The neighborhood doesn’t feel like Jersey City anymore, the Flamingo was really the last vestige. There is a senior citizen housing complex right near it – the breakfast and lunch  weekday business was huge, from all the workers in the neighborhood – and they were ready customers for the rest of the time, let’s hope City Diner takes into account fixed incomes.

At least a diner is opening there. And, in spite of the hip word, maybe the diner is being reimagined, a new diner, I can’t remember a new diner. All the ones I’ve gone to have been around since before my time.  A new diner, that’s sort of, well, cool. Cool is about as close to hip as you can get.
Large Help Wanted signs – hell, posters! – are pasted in the City Diners windows.  Help wanted signs! In Windows. Used to be all over, at the Mall, Newark Avenue stores.  That’s a trend worth reviving. 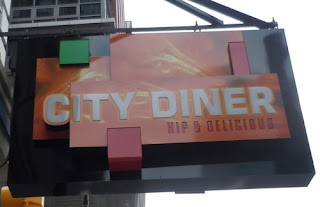 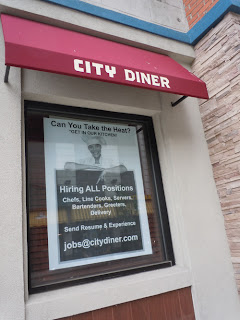 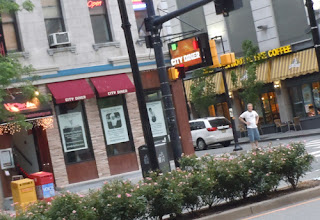 I never did a post specifically on The Flamingo Diner.
But here is one about a snow day walk that ended at the Flamingo.
Here’s another on an actual Cigarette Vending Machine thatwas there. This was in 2010, when I believe they had officially been banned