The Shining by Stanley Kubrick 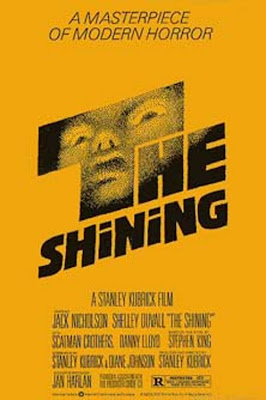 The Shining was the second installment in the J.C. Film Forum’s seven week of horror march towards All Hallows Eve, falling on a Sunday just like the weekly meeting of the local cineaste society. I love Horror flicks, love Nicholson, love Kubrick. I just never thought all that much about this movie and quite frankly, after Eyes Wide Shut I’ve sort of reassessed my feelings on Kubrick, and not for the better.

But then, I forgot, this movie also has the great Scatman Crothers.

The film has aged well, there was lot of stuff that I forgot about, like the naked woman in the bathtub who morphs into a decaying old woman, or the scene of suggested fellatio of a guy in a tuxedo by a guy in an animal costume. I got the feeling that Kubrick wanted to put his distinctive stamp on the horror genre (just as he had done with the science fiction film with 2001 and the period drama with Barry Lyndon, and would do with the war film with Full Metal Jacket, which I’m inclined to vote his best film these days). In addition, he makes all these clever and very subtle to horror films up until that time, with the gory flows of blood reminiscent of “giallo” Italian Horror, the spooky big hotel reminiscent of Hammer films or the shots of the lit underneath face of Jack that look so much like AIP exploitation films. Early on there is a tracking shot of the lobby as the caretaker, his wife and child begin their first tour of the Overlook, and the camera reveals several rooms, a similar shot of multiple sets that James Whale utilizes in Frankenstein then in Bride of Frankenstein (both films have great DVD commentaries, that made me cognizant of this camera move).

And Jack, that Jack. Whatever the rating of this horror film, however good you think it is or not, this is not just a stellar performance of Jack, it was the swan song of the young Jack. Think about it. His career began with Roger Corman in the 50s, but didn’t really make a mark until Easy Rider (68). The Shinning was 1980. That basic ten year period we saw him really fine tune his craft—Five Easy Pieces, the Last Detail, Chinatown, Cuckoo’s Nest—and redefine film acting. In The Shinning, he just goes for it entirely, reaching deep within his psyche to find a true madness. He succeeds in exploiting his own self for our grisly entertainment. After this film, he played a sap (Postman), a forlorn playwright (Reds), the hedonistic astronaut in Terms of Endearment. He’s always good, and he had some great roles that revealed other aspects of his talent. But he was never this intense again, which seems a culmination of all the tics and nuances he developed during the first phase of his career. Maybe he was spent and he had to find other nuances to move it forward. Or maybe the cost was so high for the artist to go there that he could not risk going there again. Oh, Jack still plays Sinister since Shining, like the Joker or in Wolf or spouting You Can’t Handle the Truth or in The Departed, but he has never been this threatening. He never sustained this level of psychological intensity again. Few have.

How does the Shinning rate as a horror film (click here for an explanation of this system).

I have attempted to be honest in this rating, which takes an effort. I have seen this film a coupla three times. I have to pretend I don’t know what is happening and then try to measure if the suspense succeeded, etc. The grades are on a curve.


Not a lot of jolts, things you don’t see coming. It was pretty scary, really creepy but the suspense wanes. The last act is pretty much an over long chase scene—they take a long time to get the kid and Jack into the hedge maze. Also, while it sustained the horror show world of ghosts that live in the Hotel and invade Jack’s psyche, King’s story is about this telepathic ability called the shinning, yet when Scatman comes to the hotel to save the day he has no idea that Jack is right next to him? Earlier in the film, Scatman is going on about things give off a shine, how some places leave traces. Where was the shining when Jack was right next to him (or his peripheral vision). It’s a major flaw. Inconsistent with the supernatural power of the shining undermines the believability of the story.

An above average horror film, yet still a classic. I fear heavy snowfalls.

Final Note: Shutter Island, as Scorsese noted, was influenced by the Shinning. The eerie claustrophobia of a big space, where you can’t trust your own mind, Shutter Island invokes.
Shutter Island was an under-rated flick.
Posted by Mr. Tim Hrk at 7:09 AM