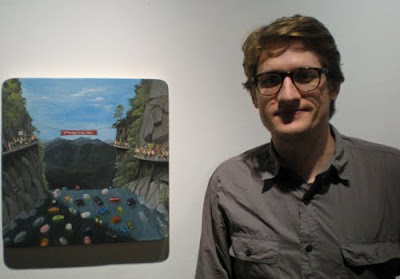 I was sort of bleary eyed, impatiently waiting for the Old Glorys and found myself lingering in the Gallery section of the 58 Gallery and taking in what was the actual purpose of the event, the opening of In The Moment, new paintings by Kirk Bray. For whatever reason, I wasn’t in the best frame of mind to observe the visual arts. Luckily the art made a valiant attempt to convince me otherwise.

I happened to chat with the artist, whose website is here. 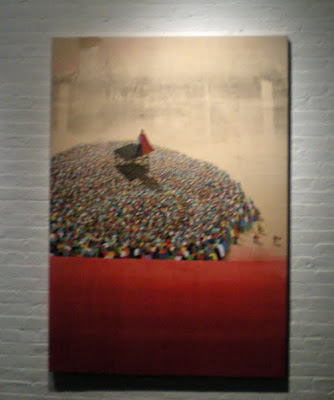 Born in Tennessee, raised in Minnesota, then moving to Jersey City from Los Angeles, the work was humorous, albeit subtle.

For instance one was called “Trust,” it had a large male figure with a red cape standing on a platform, rocking back on his heels, surrounded by a crowd. The artist explained to me that the concept was a take off on the old summer camp game of trust, where you lean back and trust your friends stop your fall.

Another that I liked was a race of barrels and a waterfall, the old guy going over Niagara in a barrel. Except these barrels were emblazoned with consumer products, similar to the decals used as promotions on NASCAR participants. Crowds filled platforms above the water, holding signs. It was a commentary on spectator sports. One of the signs had a scripture verse, and considering that maybe not all the people inside the barrel would make it out alive after going over the waterfall, the presence of the bible was quite funny.

I was too tired to take in the whole thing, and soon the set by the Old Glorys started. These were pictures you had to look at for a bit before you smiled. They are funny. It was sort of like looking at the contest on the last page of the New Yorker, where readers look at a New Yorker Cartoon then make up their own tagline. 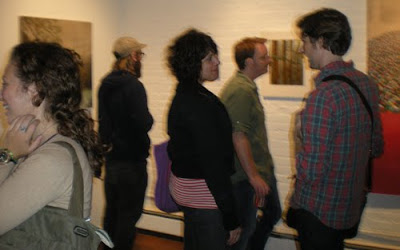