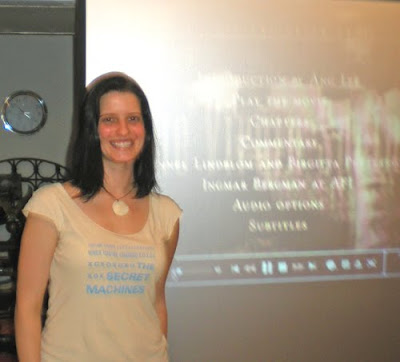 The Sunday Night Film Forum is a sort of informal, semi-underground, neighborhood Cineaste Society. Now in its third or fourth week, the project is still evolving. The project bills itself “Interested in films outside the mainstream Cineplex… Each week a different off-the-beaten-path film will be screened. Each Screening will be followed by a discussion.”

According to Yvonne Vairma, curator and host of the Forum, she wants to mix up the selection, “with new independent films that have played the festival circuit with older art films that are not as well known.”

Yvonne introduced the film then after the screening, conducted a discussion.

Sunday Night Film Forum is held in a really interesting space on 5th Street, twixt Monmouth and Coles, called Jersey Art School. The name is apt—actual art classes for children and adults take place in the building, which seems to be a converted townhouse. An urban-quaint porch aligns the front of the building, and the Forum is held in the front portion, what might in past decades been called a drawing room. The back portion of this ground floor space includes a work area as well as bathroom facilities. Frame photographs and paintings decorate the walls.

This is not a theatre. The seats are folding chairs, numbering no more than two dozen I reckon. The films are DVDs projected on a small screen similar to the one your Aunt Doris & Uncle Ned used in their rec-room when they showed the slides from their Six Flags summer vacation. No admission is charged. A small sign saying donations welcomed rests by a glass jar on a table, where beer and wine were available. It’s a low-key affair, refreshingly un-fancy. The setting is funky, unvarnished and intimate.

I read about the forum at the Jersey City Independent, the second installment caught my eye—Ingmar Bergman’s Virgin Spring. I hadn’t seen this movie. I love Bergman, and hadn’t seen one in a while. I’ve been meaning to catch up on the rest of his oeuvre. The only thing I knew about it was that it was the basis for the Last House on the Left. I saw the remake (the remake of a remake?) released last year. Sort of a dopey flick, it ended with the bad guy’s head being placed in a microwave.

A funny thing happened at the forum on the way to Virgin Spring. Some sort of snafu had taken place and Virgin Spring had to be re-scheduled. Instead we were going to see Asphalt Lambs, a Finnish film from 1968. Neither the host/curator or myself or the dozen or so folks who showed up had ever heard of this film. In fact, no one could name a Finish movie or Finish film maker. Nor could anybody name Finland’s Minster of Finance or a single member of their Olympic Bob Sled team. Everybody was in the same boat. No one had any pre-conceptions about the film.

Essentially a group of strangers gathered to watch an unknown film, which by the way, was a strange film. Asphalt Lambs was part of the Finish New Wave of cinema which according to some googling, was akin to the French New Wave. Indeed, the film reminded me of Goddard and Rohmer. It was in black and white and chatty and very counter-culture. The story was about young love against a conformist and debased society. The protagonist was an artist who had suffered from hallucinations—today he would likely be diagnosed as bipolar and suitably medicated—and the young gal that loved him. There was a dollop of nudity and some euro-style sex scenes.

I liked the film a lot, but I liked the discussion afterwards even better. People just gave their opinions and impressions, fresh, direct, honest. It was a very unique and enjoyable cinema experience.

The credit goes to Yvonne Vairma, a Jersey City writer and filmmaker, according to the online promo for the Sunday Night Film Forum. Attractive and personable, she has a film knowledge and enthusiasm that indicates the likelihood of formal study and training, augmenting her obviously genuine love of film. In addition, she exhibited effective skills as a discussion instigator and facilitator. She enabled a smooth exchange of ideas. All in all, a very satisfying evening.

The next Sunday was Virgin Spring, I was pretty excited. It’s been a while since I’ve seen a Bergman. I haven’t re-watched Bergman a lot, but I have vivid memories of them, or most of them, and of where I was when I viewed them. Bergman was really the first serious foreign films I had ever seen, way back in the late 80s, when I first had access to a video player. Port of Call might have been the first one, which I watched with the girlfriend at the time. Winter Light was another from that era. I also rented all they had from Video Rent All and especially loved Wild Strawberries, Persona and Through a Glass Darkly.

I admit to being maybe a little too opinionated when it comes to literature or music. Movies though, my tastes are democratic. I find Bergman as entertaining as say, Star Wars. Maybe it depends on how one defines entertainment. Bergman’s journey into the psychological is just so damn engaging. He is one of the greats, his films are timeless. They look so distinctively beautiful. They may be paced deliberately slow and the subjects are not “fun,”—but the enthralling experience of watching the interior drama unfold is fun.
Actually, Virgin Spring seemed to me his most accessible film. It’s a revenge story. Set in medieval Sweden, a feudal landowner's beautiful teenage daughter, on her way to church, is brutally raped and murdered. The perpetrators unknowingly wind up on the landowners farm, where they are given food and shelter. The landowner gradually discovers that this daughter his dead and the killers are under his roof. He takes vengeance on the men, killing them with a knife. Bergman handled the violent action superbly. The landowner, a devout Christian, after he has wrought revenge, says to his God, “I don’t understand you,” questioning why he let such evil take place in the world he created. Yet he vows to build a church of “mortar and stone,” thus firmly establishing Christianity in Sweden.
Yvonne in her comments pointed out that Bergman had little to say about this film. I think it’s because of his fidelity to the source material—a Swedish Ballad that serves as a fable. The landowner feels regret and does build a church—Wes Craven left this part out. Bergman, whose father was a Lutheran minister, lost his faith, thus many of his films feature existential brooding about the nothingness of existence. In Virgin Spring, not so much.
This was the first Bergman for most of the folks gathered at the Sunday Night Film Forum. In a way I couldn’t believe it, since they were obviously film lovers and so astute in their observations. On the other hand, what a wonderful and rare experience, to be with people for their first Bergman. Yes, yes, the irony is that they lost their Bergman virginity with Virgin Spring. I believe it is fair to say, this was the first time a Bergman film was publicly exhibited in Jersey City, at least on Fifth Street.
What is ironic is that, what made me hesitate to go in the first place to this Sunday Night Film Forum was the discussion. But now that I’ve been, it’s probably the main reason why I’ll go back: the experience of understanding a film through the eyes of others.
Posted by Mr. Tim Hrk at 9:02 AM