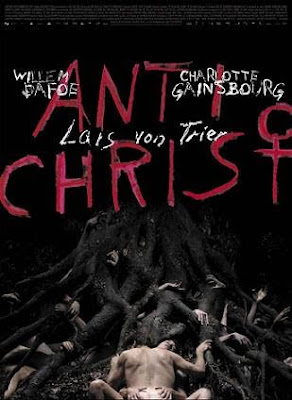 Seven weeks of Horror is how the Jersey City Film Forum curator, Yvonne Varima described what will be on view up to Halloween for this weekly film series. The first was Anti-Christ by Lars von Trier. Since Hollywood is always good for one or two horror films worth seeing in October, and because it is one of my favorite genres, I’ve decided to take this opportunity to introduce my special Horror Film Rating System, and to produce mini-reviews and impressions, to be applied only to horror films.

I knew nothing about this film beyond what I read, and what I read made me more interested than not, just not interested enough to make an effort to pluck down thirteen bucks in a NYC art house. Seeing a film that you are not inherently inclined to see is dependent on circumstance. What else is out that week, what else you are doing. Within a few weeks, you can’t find the film anyway so if the fates are unaligned, a film slips through the cracks. I was aware of this work, and had no preconceptions, no bias for or against.

I loved the originality of the film more than the film itself. It stars Wilhelm Dafoe and Charlotte Gainsbourg, a couple in grief over the death of their toddler son, whose death you see in the opening scene. Gradually the grief is overcome by an evil presence—or is it just dementia—well, that is an open question. Nonetheless, some gruesome acts ensue.

The relationship between the avant-garde and the pulp is a fascinating one, especially the idea there is more overlap here than one cares to admit. Readers of William S. Borroughs can attest to this notion. Antichrist is both a disturbing Eruo-art film and a gut-bucked, exploitation fright freak-out. Art House meets grind-house! The director went over the top and kept going, getting more and more outrageous. If you go over the top, that’s what you have to do, keep going. This film follows that dictum.

The film marked its parameters in the first five minutes: graphic, at moments explicit—sex, a toddler falls out a window and dies at the moment of the couple’s orgasm. Then it phases into a turgid, moody, snail-paced depiction of a couple in grief. The husband, a therapist is helping his wife, who is going for a PHD in the history of witchcraft, deal with her grief. Weird stuff is happening on the edges as the psychological drama seemingly unfolds. But she’s not just crazy, Satan is real and here, in her! Animals talk. Freak-out time, my wife is not just crazy, she could be possessed. The wife proceeds to impale a grindstone to Dafoe's leg. She maims her own genitals with scissors. Freak out! Somebody slipped brown acid into your Kool-Aid. The violence is as explicit as Hostel, which is the height of the stakes today. Off camera is old hat!

Very disturbing, somewhat upsetting, total reprobate film making. European existential angst, but at heart a carnie wanting to display the freaks! A singular cinematic experience. I dug it, I hope I never see it again, I’ll go see another of his films (actually I realize I did rent Breaking the Waves back in the day and remember liking it) given the chance

As a horror film?

Click Here for an explanation of this rating system!