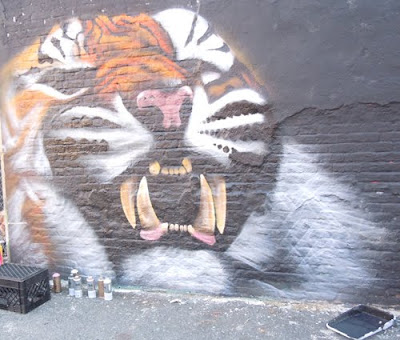 “We’ve been doing this as long as Banksy,” said Pawn when I asked him if he was a street artist like in Exit Through The Giftshop. Or, maybe he meant the other guy in that movie. Pawn (website: pawnmd.com) and Eyesor (website: eyesor.com), his partner in this project: a new mural at 172 Newark Avenue, site of a whale mural. The owner of the building, which also houses Palace Drugs & Liquors, is one of most artist friendly in town. Spaces above the retail are being rented out as work/studio spaces for local artists and even artisans. 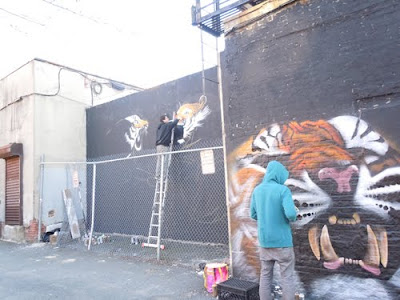 Maybe Pawn was mimicking the Banksy mystique, he kept the hoodie part of his teal-colored sweatshirt over his head and I could only make out the blonde facial hair covering his chin. Eyesore was clean shaven and un-hooded, but working on a ladder and too focused on the wall to pay attention to passing bloggers. Actually, Pawn’s hoodie probably was not for identity concealment but to provide needed warmth. A small but significant breeze was blowing, the wind chill chilling the 40s late afternoon temperature so it felt more mid-30s. I wish I brought my gloves. They may also use single names for their work, but unlike Banksy these guys are not working in secret. The mural is a commissioned – the building owner approved it and provided some funding I believe.

“He uses stencils, we’re all free hand,” said Pawn, emphasizing another crucial distinction from the most famous street artist of our time. Pawn and Eyesor are also not doing glorified graffiti, they’re muralist. This mural has tigers as a theme, a wildlife motif that nicely complements the blue whale on the western portion of the building. Both beasts are endangered and a mural only helps to promote awareness. Tigers inspired Blake, Whales inspired Melville. Perhaps this building can inspire us someday? (I can dream, can’t I?) 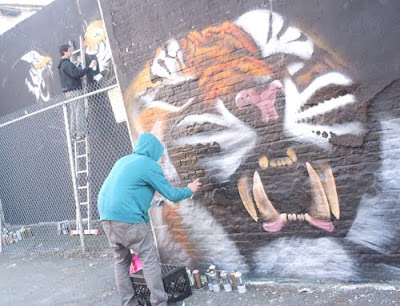 The artists “buffed” the wall with black paint last week, put down some preliminary lines for the tiger outlines. They used spray paint to create the mural of orange and white jungle felines. A difficult day to spray precisely. The last winter winds of Mid-March frequently billowed robust gusts. In one hand the artist held a picture of a tiger; the other hand shook the paint cans, and then pressed the top down. Small burst, then again glance at the picture in their hand, and then another rationed burst. The emitted dispersed dollop of paint fought the wind to reach the black brick. Observing the Tiger visage gradaully emerge was great fun.

Pawn estimated two or three more weekends and the mural will be completed. Any reason for Tigers? “I’ve just been doing animal paintings recently, thought it would be fun.”

A chap named Dylan Evans, whose company is Mad Mad Media and who is also called Project Curator - Jersey City Mural Arts Project was hanging around as the artists sprayed the wall. We got to chatting. Dylan’s an impresario of muralists, setting up artists with projects for 172 Newark as well as elsewhere in our Fair City. His blog is here: jerseycitypop.blogspot.com
He is responsible for organizing the whale mural, painted by a different group of artists. Dylan acts as liaison between willing building owners and artists. He wishes he could get more financial help from the city, but at least they no longer interfere and are actually encouraging.

"I think people will come to Jersey City to see the murals,” he told me.

It’s a good idea. The city has gained a reputation for being a home to artists, what with the famous First Street debacle, the annual studio tour and now the 4th Street Festival and the quarterly Friday things – and those are just the obvious examples coming immediately to mind. Art elevates.

Murals are also fun, they liven up the joint. Some days they’re just pleasant visual background as you go ‘bout your bidness’ and maybe, and likely without you relaxing it, your mood becomes better because the once drab facades in your peripheral vision now feature murals. Then there are other days and other moods. You pause and see a detail or something else – catches the eye as they say – and you find yourself experiencing the art more deliberately.

You appreciate the art.

Which means what exactly? Craft... talent... perception – what you are appreciating may be different and you are feeling what, amused? Touched? Moved? Just curious? Maybe all those things or maybe each thing is different depending on the day even if the instigating event remains the same mural.

Art isn’t just meant for museums or galleries, or special occasions, it also should be part of ordinary, every day life. And often. Murals are just an easy way for that to happen.

Art elevates, that’s the simple truth we all must embrace.

Talking with Dylan, we noticed that graffiti artists tagged the side of the building across the driveway from the Whale mural. Harsh orange lettering. The kid who did the tags obviously has some kind of talent, but it was still a scrawl and a form of defacement. I thought of the other murals around town. None of them get tagged. Mutual respect. If murals engender more of that then let a million murals bloom! A few dozen at least. 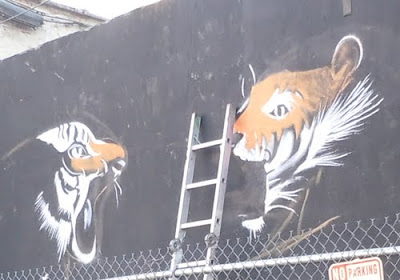 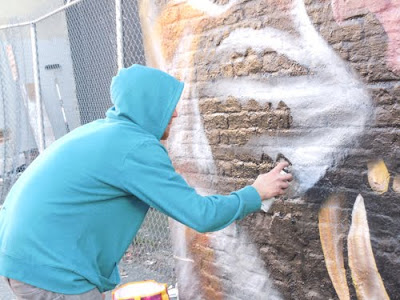 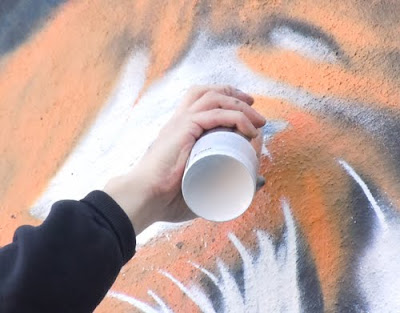 Tyger! Tyger! burning bright
In the forests of the night,
What immortal hand or eye
Could frame thy fearful symmetry?
In what distant deeps or skies
Burnt the fire of thine eyes?
THE TYGER (from Songs Of Experience) By William Blake

It's the eye of the tiger,
it's the cream of the fight
Risin' up to the challenge of our rival
And the last known survivor
stalks his prey in the night
And he's watchin' us all in the eye of the tiger
Eye of the Tiger, Rocky 3
Posted by Mr. Tim Hrk at 7:40 AM