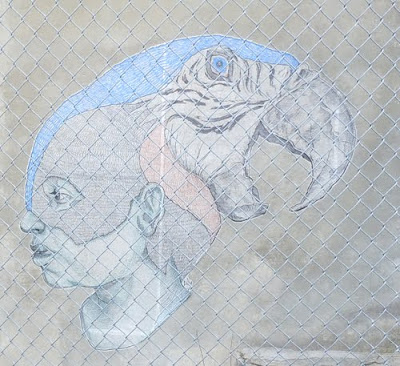 Around the corner on the same building as the Tiger Mural, in between that one and the Whale Mural, I found this Polynesian fellow. He could be one of the first Jimmy Buffet fans, the earliest parrot heads who came to Florida in hand-carved kayaks and drank shots of tequila to a demo of Cheeseburger in Paradise (Parrot head, get it). Okay, Moving on. A very clever stencil on the brick wall, it is sort of a doorway and the fence across it apparently prevents any of our local winos and junkies (and/or homeless) from taking rest or semi-shelter here. 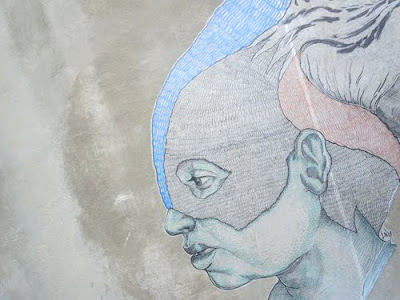 I was talking with Dylan, a mural facilitator, who organized the whale and the tiger in progress mural on the same building as the parrot head mystery stencil. He is liaison between artists and building owners. He told me he had nothing to do with this piece of street art and thought it was commissioned independent of him by the business owner. The building – 172 Newark Avenue – is renting out the spaces above the ground level Palace Drug & Liquor Store – as artist studios. A friend of mine is working with the building owner as a kind of real estate broker to artists seeking workshop and studio space.

When I asked her about the stencil, she told me the owner was under the impression it was part of the current tiger mural Dylan began.

No one knows exactly when this Polynesian parrot hat head appeared on the brick behind the fence. The fence was flimsy and seemed relatively new. I wondered – before I talked to my friend of owner friend – if the fence was put up to protect the work of art. One of the Tiger mural artist laughed at this, the idea that someone would protect a stencil (I guess it’s not an original Banksy) and not a free hand painting – and yes, he said stencil with a sneer. Then he pointed out where the fence was attached by wire to the pole – the other points of attachment had solid links. Detach part of the fence, get in with a ladder than get out. Done. He outlined a very likely scenario. 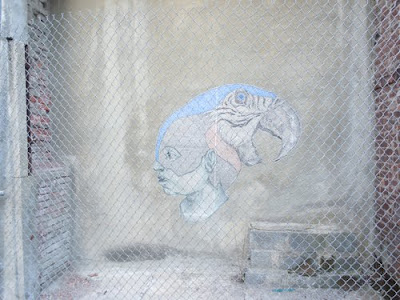 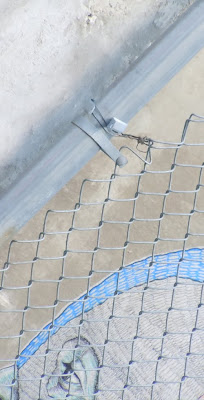 Hey, maybe someone is not being completely truthful with your intrepid blogger. The corner of the work had initials LNM, although since the image was probably a capture that could have even been on the original lithograph (it looks like one or maybe an etching). For now the identity of the perpetrator appears to be a mystery. Street Art, even back to originators like Keith Harring, are always part prank. Here we have an artist friendly building – murals welcomed, space rented for working at reasonable rates – and an unexplained example of street art. Like most street art, the meaning and purpose seem mainly baffling. The mission of street art is always the same: STATEMENT – and in all honesty, that is both its weakness and strength. Still looks pretty cool though. I hope they title the documentary: Exit Through the Pharmacy/Liquor Shop.
Posted by Mr. Tim Hrk at 8:04 AM