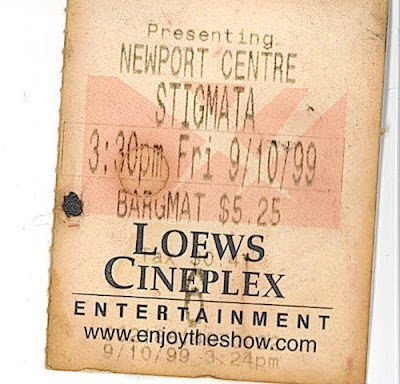 No, I do not collect my old movie stubs. I might blog about my recent apartment problems, long story short, there was this flood, repairs and painting are being done, but I also had to clean in places – like under desks and whatnot – that haven’t been touched since Clinton was President. That’s when I ran across this ticket stub.

I believe the current BARGMAT (bargain matinee) price at Newport is now $8.00. Up from 5.25, isn’t that a near 50 percent increase. Why are films and healthcare susceptible to inflation but not guns or butter?

I still remember the hilarious review by Roger Ebert: "Stigmata is possibly the funniest movie ever made about Catholicism…” I went to his website, he is one of the best writers on the internet and laughed out loud re-reading this fabulous review. It makes me want to see the movie again even though, it’s a dopey flick. Not only do the filmmakers make the stigmata resemble demonic possession, but the plot is set in motion by the millennia old conspiracy by the church to suppress the Gnostic gospel of Saint Thomas. When the possessed slut with the stigmata starts quoting the Gnostic gospel to prove the conspiracy, it's all made up gonstic gospel. The screen writers couldn't be bothered to even use the real Gnostic gospel of St. Thomas!

The Internet had been around a while by 1999 and by then the search engines and information really started being established. Publicity surrounding this religious horror film included stories about stigmata through history, and I remember reading about how there was one in rural Canada. My dear friend, Father Fitz, who died later that year, was a senior citizen and was constantly going on senior citizen group trips. Around the time of this film, he said he was taking a trip to Canada. I mentioned that I read there was a someone who was reported to have a stigmata in Canada. Without missing a beat he says, “it wasn’t in the brochure.”

It’s not that I am shocked that 1999 was only 12 years ago, but I am surprised that 12 years went by more quickly than the previous 12 years. Maybe that’s what memories are for. Random memory, that’s not it. These memories are not random; they are inspired specifically by finding this stub. But finding this stub was random. I sometimes will use a stub as a book mark, or find them in the watch pocket of my jeans after they come out of the wash. Finding one 12 years later by chance, because the apartment above me had a flood and I had to do some unplanned moving of the desk and uncovered this artifact – that’s the random part.