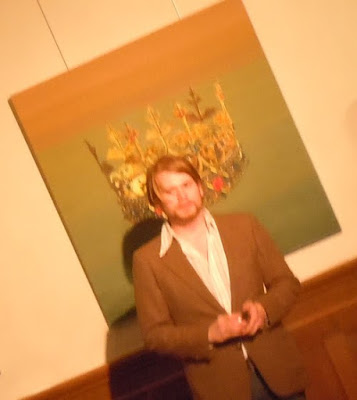 Thomas J. Carlson entitled his show at the Majestic condominiums, on Montgomery near Grove, after a copy editor’s conundrum: Affect: Effect. I remained baffled about what he is trying to get at with the word play – I’m not sure what the difference in definitions could be; one is a noun and the other verb and what is the point of the colon? – but the title is fun and copy editing is not. His work always has a playfulness. He likes to subtly fool around with contrast and perspectives – check out the fabulous mural that I blogged about a season or so ago – trying to decipher effect versus affect simply adds to the fun you get experiencing this particular exhibit.

Carlson runs the Jersey City Art School. He has become well known around town (he hails from Minnesota). His work is often included in group shows and the art school has done a great deal of community out reach and hosts many classes as well as other events – like the Jersey City Film Forum. A showcase devoted solely to his work is something of a rare treat recently. I had never been in the space before, which used to a theater (the Majestic Theater) a faded sign remains on the brick facade facing Montgomery Street reminding us of this past. Carlson said when he saw the former lobby – which includes such art deco touches as ornamental angels embedded in the walls near the high ceiling – he became inspired and began turning out additional work to round out the exhibit. He pointed to a self-portrait – “I finished that last night.” 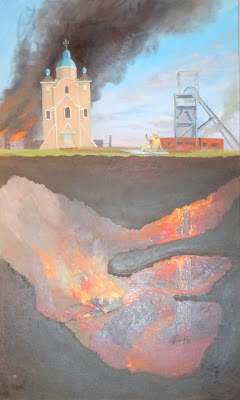 The depictions boast a freewheeling diversity – landscapes, objects, portraits -- but all the perspective of each, apparent as you view, are all slightly and amusingly askew.

The centerpiece was a study of a crown, based on a famous Jan Van Eyck work, “Ghent Altarpiece.” Carlson’s crown was a detailed headpiece, replete various gems and filigrees. The geometric shapes within the crown repeated themselves, and then as you looked around the gallery, the same crown from a different angle is featured in another picture and then it seemed to be on the side of an apartment building that appears in a nocturnal urban landscape. This painting, The Big City, featured a color of the night was an eerie washed out blue – a pale shade of cobalt.
11 Remaining People in Centralia, PA, Carlson said was based on a This American Life episode about a perpetually burning fire in a Pennsylvania mining town, I liked the most. This was one of his cross section pieces, as he termed them – other cross sections paintings can be seen sometimes at his school – where both above and below ground scenes are visible. Fire is the central image here, and you see what looks like part of a town or at least some kind of industrial thing aflame, thick billows of smoke mar the horizon – fires are burning in the mine below . The destruction seems contained, monitored and the people seem more like spectators than victims. It is weird and whimsical, but also the point counter point of the above ground and the subterranean world are in balance, even though the balance seems slightly ajar – as if it is coming into but never quite reaching balance – because the inner earth is more vast than the ground and sky portion.
The mine fire piece he painted in 2011, an older piece (2009), which Thomas described as his most cynical painting, is Young Bucks – St. Barthelemy. It is phantasmagoric. Painted while he was in the Caribbean, it is a fictitious night club, inspired, he told me, when he saw all these rich middle aged men dancing in a disco with women young enough to be their daughters. The light is weirdly dim yet still glistens. You truly sense the seedy luxury of these island resorts. During the day, the resorts are beautiful tropical paradises then night falls and sleaze pervades. Two floors of faceless disco dancers are depicted, everyone seems to be wearing the same thing and they are oblivious their truly vapid selves. The two level discothèque is carved into what looks like a small mountain, with the neon blue marquee letters along the mountain ridge on one side, then to left are what looks like a nice island port. Again, Carlson contrasts are at play here: first the two levels of dancers seem like a reflection of each other then act as a counterpoint to what little of the island’s natural beauty remains revealed. The imbalance acts like a cognitive dissonance within the context of the painting, enhancing the unease the viewer (and the artist) feels about the decadence of the disco dancers, both furthering the basic narrative of the painting – sleaze in paradise – while deepening the subtext – revulsion of that sleaze. 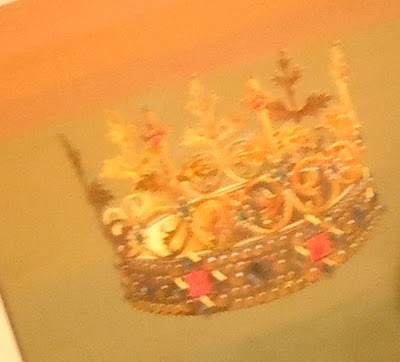 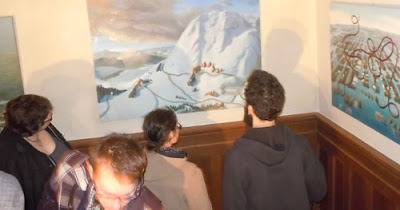 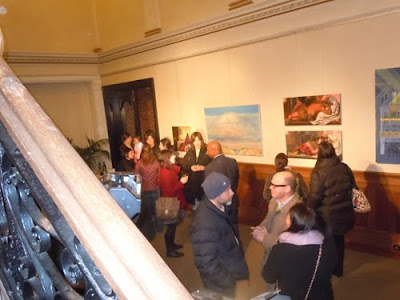 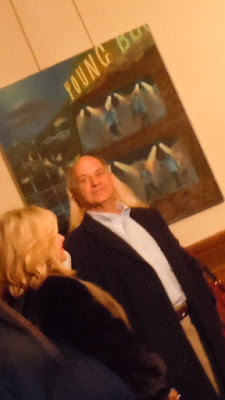 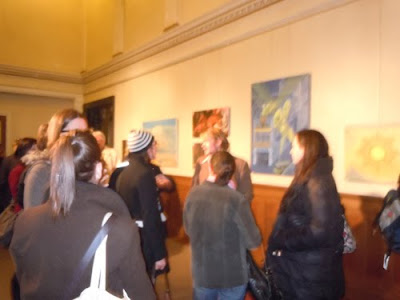 The point/counter point style is perhaps most blatant in a related pair of paints – Samson Painting Van Dyck Detail and Samson Painting – Rusty Tools. Based on a Van Dyck painting of the Biblical tale of Samson and Delilah, the former shows the muscular man and the latter is a vivisection of the icon, revealing tools beneath his skin. Upon deeper inspection he is obviously not human.

Brendan Carroll (sometime local agitator) is curator of the show, which I believe was the first in this space. Art Galleries in our once Factory town can be grab bag affairs. The spaces, designed for other functions, are basically repurposed for the art. Trade offs are inevitable. Most often, the light could be better (lighting may be a flaw at the Majestic as well). As curator, Carroll is as aware of this space as he is of the art it would contain. Instead of the space and art in conflict – or just being tolerant of each other – the curator took into account the space. The space wasn’t transformed – it’s still an old theater lobby now the large foray of a residential unit – but Carroll positioned the art so the space actually complemented the work. In addition, the placement of the paintings had a coherence uncommon in our fair city – for example the show ends with the self portrait, the viewer feels like they’ve been taken on a journey. The cumulative experience of this gallery show is as satisfying as the individual pieces.

Carroll told me that it was easy to curate because Carlson is a representational painter, and that is rare. I agree on both counts. What is unique with this artist, one of his generation – he’s young, a Y-er not an X – er, is the apparent lack of contemporary art influences – tattoos, graffiti, comic books, Warhol, street art – all utterly absence. Indeed his work seems to pre Impressionist – he unironically loves Rembrandt for goodness sakes! Oddly though, I get a sense that Dali inspired some of the colors. In spite (or maybe because of) these lofty aspirations, his work is not stuffy. Carlson doesn’t cater to art scholars. The work is accessible and entertaining. He might prefer to mimic older masters, but his sensibility is unique and fresh; his pictures tell us something about how we live now. 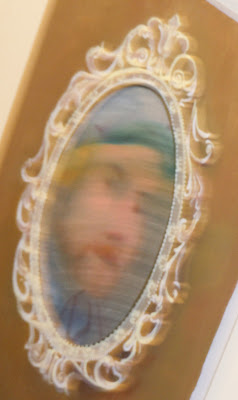