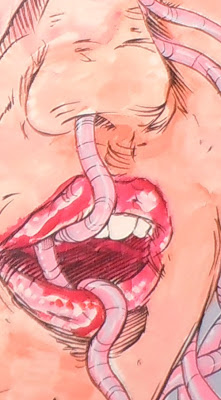 Ken Bastard now makes his main residency in rural Massachusetts. He returned to town to show his art, as in his new show Pulp. Bastard (his real name is Kenneth Conlow) is in a particularly prolific phase, only a few months ago opened Sacred & Mundane, an entirely different collection than the one now on view at the 58 Gallery, Pulp. 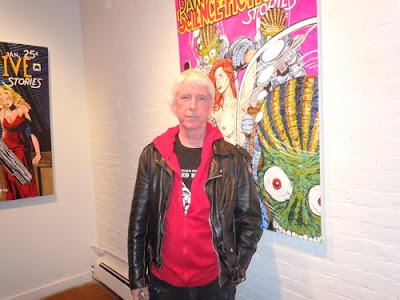 Is this heightened productivity attributable to the increase in fresh New England country air in his lungs? He is living healthier he says, still drinks a lot of coffee but “I eat wheat bread”. Maybe some of the cause is the fact he’s nesting with his girlfriend, Elizabeth Brown (they call their home the Brown Institute). Love and stability may have softened his edginess, but it also has enhanced artistic focus. “I was painting these pieces up until a few days ago, once you have an idea, and the show is planned, and you have a deadline, you do the work.” 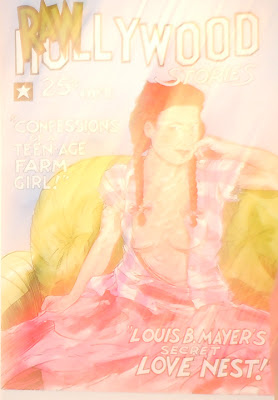 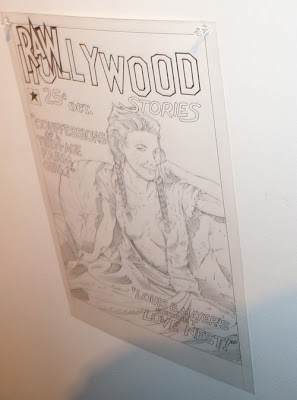 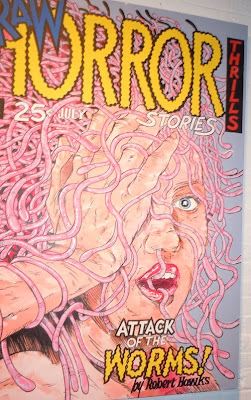 Pulp is an homage to lurid and sometimes campy illustrations that adorned Mid-20th Century pulp magazines, publications during the height of America’s short story boom that were dedicated to genre fiction prior to the advent of the television take over of our popular culture. Writers from Dashiell Hammett and Raymond Chandler to Jim Thompson and Elmore Leonard first published work in these publications, as did almost all of the Science Fiction greats, like Ray Bradbury and Robert Heinlein. In addition to Crime and Science Fictions, Westerns, Horror, Adventure, even sordid sex tales were categories that devoted magazines and readers. Dozens of these “Amazing Stories” publications competed for readers every month, and it was the striking covers by which they did battle for shares of the newsstand market.

Today the covers have long been recognized as art and the writing inside as (well, often enough at least) as literature but back then it was just trashy popular culture whose value was only appreciated of avante gardists. 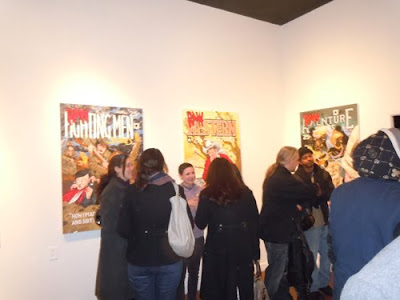 Pulp is the most cohesive and unified Bastard show: five foot paintings all around the Pulp theme. An artist with strong illustrative leanings, Ken often reflects the popular culture he grew up, particularly comic book art. Jack Kirby and Art Crumb clearly are important influences. The sensationalism intrinsic to our media society is often fodder for his inspiration, but the coldness of our tabloid conscience era seems to have ebbed in his recent work, replaced by a warmth and compassion that is, perhaps surprisingly, conducive to his style and not at all out of place. In the Pulp show, Ken turns the volume down on the distinctiveness of his style – his thick, expressive dark lines are more subtle for instance – and shifted his emphasis on the content of the theme – Pulp magazines.

In other words, he quite astutely, hides his style so the first impression for the viewer is of the faux covers. The covers appear authentic at first glance and he has represented the archetypical magazines Horror, Detective, Western, Science Fiction and Raw Hollywood, which is the titillating sleazy “pink story” magazine. Subtly though, while an unabashed homage to the mags from this bygone era, Ken also re-imagines them – bare breasts are on one cover, the worms eating a woman on the horror magazine has a worm dangling like snot out of her nose – refreshing adolescent humor – and even the Detective magazine with a woman with a healthy cleavage in the back ground features a cover line – “a Slug and a slap from a 45” – likely a little too heightened bit of tough talk for even the genre of the time. The realization of the anachronism gradually lets the viewer of the paintings in on the fun.

As I was considering whether this is more of a re-imagining than an homage – and the difference between the dual concepts – I noticed Ken’s distinctive illustrative style. His use of thick black lines creates texture and expresses emotion. The style is not at first apparent and then it is, for instance, in the hand holding the revolver in the aforementioned “Raw Detective Story Magazine.”

By hiding his style and making the tribute the priority, Ken might have made his most personal work. Judging by the preliminary sketches of the pieces displayed in the corner as part of the show, you certainly get the sense of the intentional and intensive work involved in producing Pulp.

Ken’s shows are neighborhood events, attended by all the segments of the downtown Art scene. He’s a likeable chap and widely respected.

In the back room of the gallery, a hard core band pumped out accelerated post-punk anti-melodies; a DJ spun tunes in between the sets. It was JC Fridays night, and as usual in the winter, the offerings this time seemed lighter than usual. But there was a Bastard show to go to and spring seemed suddenly in the air. How was life in the country for the local artist?

“I get up in the morning and paint my silly pictures. Life is good.” 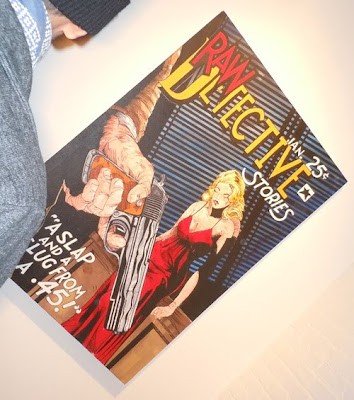 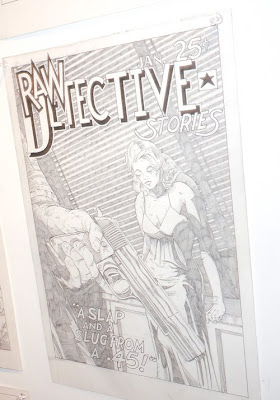 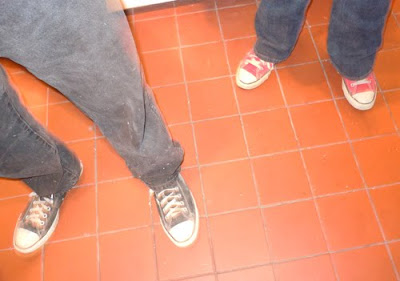 “you have aimed loftily; you have done nobly. Do not repent that, with so high and pure a feeling, you have rejected the best the earth could offer.” Nathaniel Hawthorne
Posted by Mr. Tim Hrk at 11:29 AM