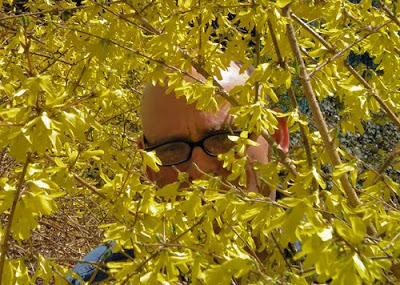 A year. I’ve been doing this blog a year. April 1st this blog began. Thank you all for reading it. It’ been a gas. I was born in April. My mother told me they planted this forsythia bush for me and it has always been in bloom around my birthday. I started what I like to call the Blog Project as a creative outlet and experiment. I like to think I’ve discovered a new whimsy.

So, please permit some reflection on my one year anniversary.

Let me first apologize for the typos and lazy copy editing. As well as sometimes the rambling posts. As George Washington once said, if I had more time I would have written a shorter letter. He should have added typos and copy editing.

By the way, the blog title I plagiarized from myself. I spent about fifteen years studying and writing the prose poem. Every few years, I collected them into little collections and one I entitled, Dislocations. I liked the way it sounded, echoing alienation. Like just about everything about the blog, the name evolved—originally I just used my email name.

And the poetry? I’ve actually written a couple recently, but back then, I eventually collected the best of this work into a chap book, “I is Another.” I sold nearly a dozen. I used to do readings at Carpo’s a lot, and read at St. Marks and at CBGB’s. It was fun. Way back in the early 90s. But writing is ever-lasting and there is always a new challenge, a new project, another muse.

Originally, I saw the blog project as a way to promote my website which featured short stories, as well as excerpts of a novel and memoir. Unfortunately, that was a Geocities affair and they shut down last summer. I want to revive it and if anybody can help with some very simple web design and answer a few really basic questions, please email me.

As part of the evolution, Jersey City subject matter expanded and it has become more that what I at first intended. The responses on the J.C. stuff has been quite satisfying. I guess I remember as a kid, the Village Voice and the East Village Eye, which wrote about the arts and not just the local arts of the area, but reviews of records, books and films. It didn’t matter if something was happening in Paris or on Bleaker Street. That inspired me. The arts are the arts, we look for meaning in them, we look for signs of significance for culture, for our civilization. We should look for the same things in local art as we do in national or global art. I’ve always been eclectic prone. I can’t help but see 5,000 years of human history in every thing.

My only mission here is to write about what I feel like. Whatever I encounter is fair game. Jersey City is a unique city. How much of a prism is it for the world at large—for the human condition itself, for how we live now? You want to figure that out, have at it. I just take it for granted that it is and go from there. Interesting photographs in a new gallery or a fascinating statute & shrine in a local church or a insightful new record by Sleepy LaBeef? Inclusion just makes sense to me. I appreciate those who appreciate it and quite frankly, if you can’t, start your own blog.

So, I’m taking a moment to reflect here. Most of the blogs have been silly stuff, a creative outlet for me, a kind of vanity project. But here are five posts I admit to possessing pride about:

I wrote this thing about my buddy Danny, his wife, Laura, and how they saved the animals of New Orleans during Katrina. Our infrastructure may be different than the levees of the Gulf, but they are just as decayed and in disrepair and to believe we are any less corrupt than Louisiana is ignorance. But, I digress. Click here

A year or two ago, my buddy Carmine showed me the kitchen at Holy Rosary Church where they make the Italian Rice Balls. I always knew this would be a great story and quite frankly, I’m shocked (but sadly, not surprised) no local reporter ever did a feature on these women. I think it is a strong piece and as a writer, it was a genuine joy. Click here

What I like about memoir is that it is both subjective and objective. At least it seems that way to me. Literature should make the distinction between the objective and the subjective obsolete. It’s so Punk Rock, so Kerouac, so Rimbaud. I write journalism for a living, so obliterating that line is something I aspire to when it comes to the non-journalism, the art. I wrote this piece about the courtship of my parents for a MFA workshop and I think it’s pretty strong. Some agreed. Click here


Why do I write about music so much? I love music. I listen to it all the time. I wrote record and concert reviews in High School and College, it was sort of an early career path that never happened. I’m trying for something very different with the reviews in the blog project and is actually part of a project I’ve been thinking about for like 20 years. I call it a personal History of Rock & Roll. All the music posts are part of that project, even the ones about our local scene, again it’s about the objective and the subjective, and about how specific music makes me feel. So far, my tribute to Howlin Wolf, trying to generate interest in his centennial year, I’m pretty proud of that one. Click Here


I don’t think you can avoid the autobiographical in a blog. It’s different than memoir. You can’t help sometimes to write about something about your life. I recently won a local super bowl pool which caused much jocularity among a circle of friends, none of whom would ever use the word jocularity. I had a lot of fun writing this piece, with veiled names and innuendo. Nobody gets this post except for a handful of Jersey City folks, less than a dozen. That makes it the funniest thing to me. That’s me. Click here

1) My J.C. decade in review is pretty good. 2) I was hospitalized in the fall, actually had a death scare. I saw Any Day Parade my first Saturday Night out of the hospital. They did such a great show. Was it them or me being glad I was alive? If you hear their music, you’ll know it’s them. Still, I have a personal fondness for this post. 3) I like this piece about mother’s day. 4) One of the great things about Jersey City is our Puerto Rican community. I don’t think this piece is written all that well but taking the pictures was about as much fun as I had all year. 5) Out of all the record reviews so far, I think the best has been the one on the Grateful Dead.


God Bless you all.