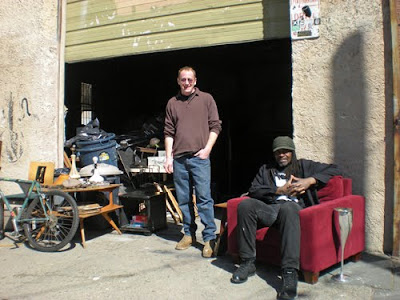 Some galleries can rely on grants from government agencies and endowments from foundations. No so for those Galleries located on Coles Street in Jersey City (okay, there’s only one gallery – 58 Gallery – there), which had to resort to a garage sale for funding support of this important showcase for J.C. artists. John, (left), who works as Facilitator for the gallery was being helped out by Uno, an artist some Dislocation readers may remember.

58 Gallery was included in this previous blog.

The garage next store to the space had a lot of cool stuff in it. The space itself, according to John, previously belonged to a Glazier, back in the industrial days of Jersey City, before being reclaimed for the art scene. A large plastic carton was filled with tubes of acrylics. Most everything was a name your price deal, but according to John, everyone was welcomed to take the paint, although a donation was suggested. 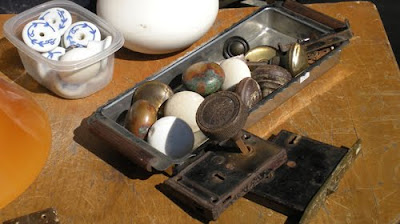 My doorknob needs are currently filled, but I was impressed with the doorknob selection. You rarely see this assortment of doorknobs at a garage sale. But you know, I might have been tempted if I had my door with me, to get the perfect match. I couldn’t tell if some of the pieces were actual antiques or merely finished with faux rust and tarnish. 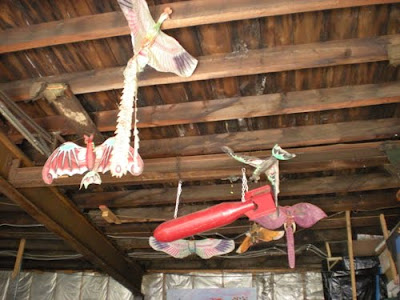 I wasn’t sure if these suspended ornaments were for sale or not. I liked the mix of Bat, Bird, Butterfly and Bomb. I love old spaces, industrial spaces in a post-industrial age. Dig the rafters. Notice the steal beam alongside the wood beams, yet the colors are similar. 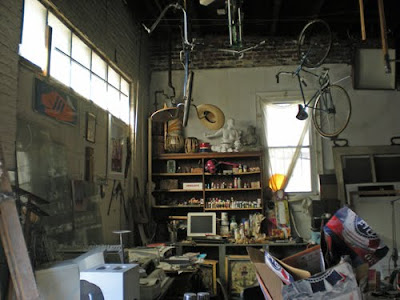 The best part of the sale was getting a glimpse of the interior of the adjacent garage. I guess some actual art does get conducted here. The gallery is part of a community space. This workshop area seemed semi-secluded within the garage. Paints, statue of Buddha, other figures I don’t have names for, hats on the suspended bicycles, what looks like drums. An assortment of objects with meaning only for somebody’s imagination. Who knew there could be as much art in the garage as in the gallery. Or maybe it’s the garage itself that is art.
Visit 58 Gallery
Posted by Mr. Tim Hrk at 10:30 AM