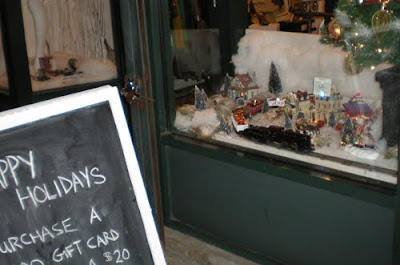 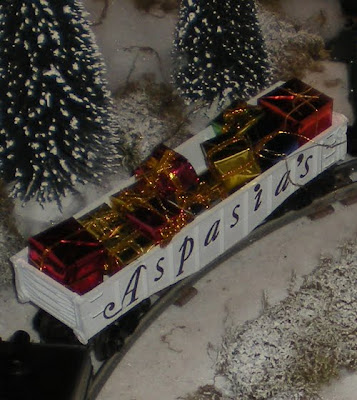 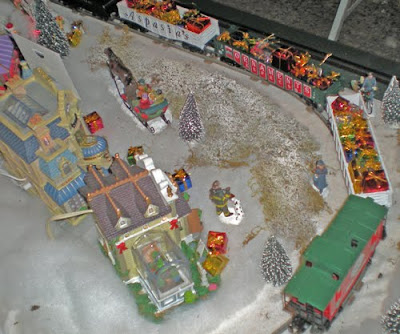 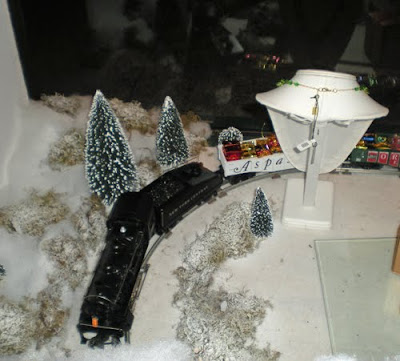 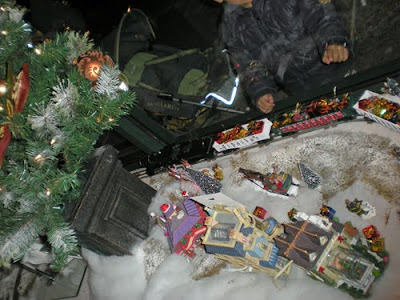 Well, I love trains so no one should be surprised that my favorite Christmas decoration is the model train beneath the Christmas Tree.
Aspasia’s Boutique on Grove Street, sells women’s fashion and accessories. A funky little store, with designer clothing that seemed both chic and comfortable, a vibe that somehow sounded both Mediterranean and Los Angeles notes. The sales person, who was alone when I happened by, was very nice, attractive and lovely. She wasn’t too sure about letting me take some pictures from inside of the train. I implored and assured her that I would not move a thing, just lean over with modest disc camera.

She told me, although the store has been around about two and a half years, this year was the first one for the train.

As tradition seems to dictate with the min-Polar express beneath a tree, the dreamscape created here is of a Christmas Town, winter in full bloom, and everyone feels cozy and Santa Claus’s arrival is imminent. Childhood joy epitomized in this innocent, happy Christmas Town. Snow men dance, all the canes are made of candy, everyone is drinking hot chocolate. Horse drawn sleigh. I digress.

The Aspasia Boutique train was as classy as the store. An attention to detail—not just the New York Central Steam engine, or the cute little tastefully wrapped presents, but the very clever transformation of one coal car transformed into an open air Aspasia freight car. Cute & Cool!

Having a successful retail establishment in Jersey City—something beyond the run of the mill bodega—is not that easy. Business folks complain about the challenges—the economy, the bedroom community attitude that pervades, the Mall and the Super Stores close by down Pavonia Newport way. Then again, it seems that Aspasia’s is the only store to do something creative and exciting in terms of Christmas Window Display. Nothing in the world may rival Fifth Avenue or Macy’s window, but how many stores even try, or go beyond lights and some garland. Pretty useless to declare a downtown shopping district when most store windows at Christmas time look as drab and dreary as they do the rest of the year. At least one downtown boutique has a contrary attitude. All Aboard!