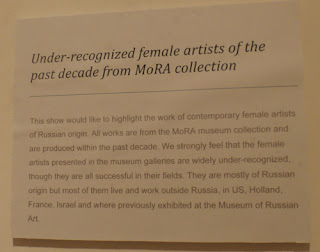 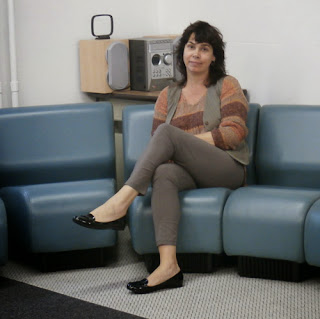 Olga Doty, Art Director of the Museum of Russian Art


The   Museum of Russian Art probably takes the prize as the biggest local gem that is nearly entirely under the radar.

For the Art Tour, Under-Recognized Russian Women Artists. I love the odd alliteration, and especially the compound modifier Under-Recognized. Aren’t we all. Sounds like this beautiful museum, which like many of paintings contains conflicting forces – the space has a functional feel, yet is also warm, inviting, well-lit and inspires contemplating art. 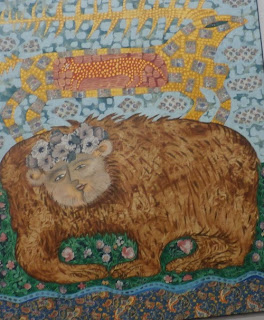 When I wandered in sometime on Art Tour Sunday, the place empty except for the Art Director, Olga, who explained why such a plethora of styles were on display. Although all the women were born in Russia, many were living in other countries – America, Israel, European nations – and they all had different memories and experiences with the Soviet era.  This shed some light on why there I could not discern a stylistic thread linking the work.  Cultures within the artists were colliding; Russia was a state of mind, a mere fact but without meaning in and of itself when it comes to categorizing these images.

But what was I thinking, that something should look Russian? There was a bear with a human face, a folklore piece that seemed replete with Slavic  intonations; other pieces had those worker and humanistic touches one associates with Lenin-era propaganda, although one depiction had a woman with  stop sign on her head dying in the street surrounded by what seems like a factory and there’s a swirling red cloud – was this red the egalitarian ideals of the worker run society floating over the violence and despair of the post-soviet Russia? 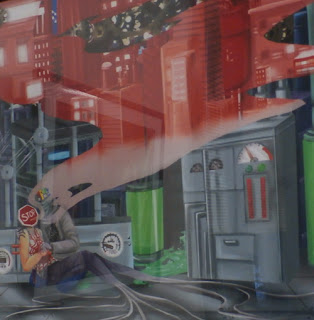 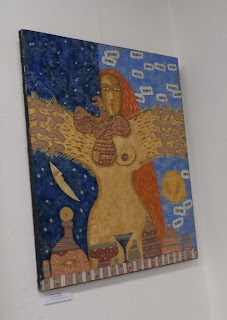 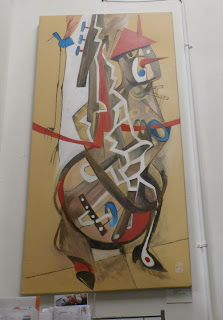 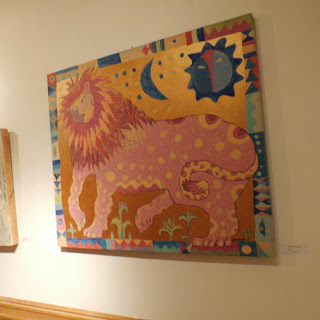 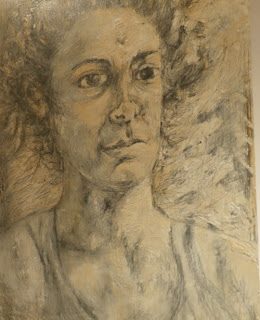 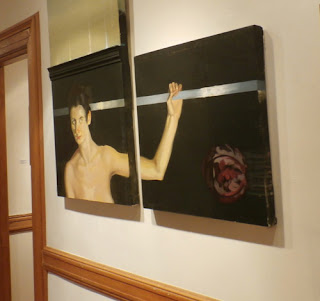 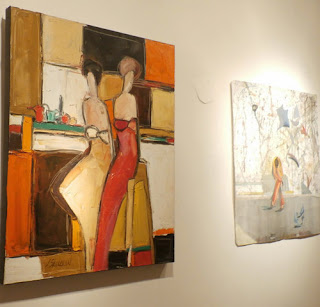 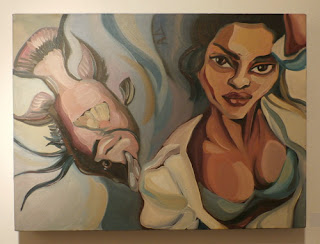 A beautiful woman with almond-shaped eyes and a mouth that looks like it would be very nice to kiss and a fish inexplicably in the background. Your gaze pauses on her lips, her round and ample cleavage – her blouse unbuttoned below her bra – then notices a similar grace in the  lips and fins of the fish. The curves reflect each other, are shadowy, creating a moody sensuality, But sadness is not far from the pleasure she and our all too tangible mortality promises. 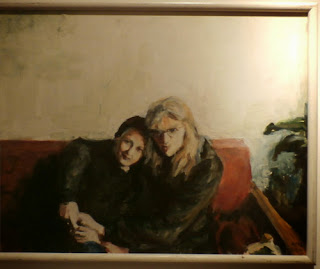 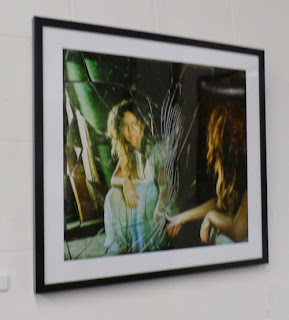 There’s another picture, a marvelous piece of photo realism, a woman, looks into a broken mirror. You see her, you see the reflection, her finger uncertainly touches the spider web crack; did she cause the shatter, or is that shatter her own anxiety. But in her eyes an inner strength shines brigther than the fear. 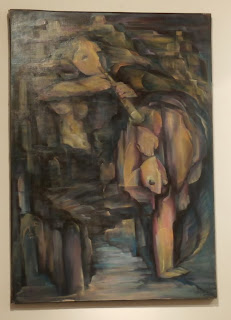 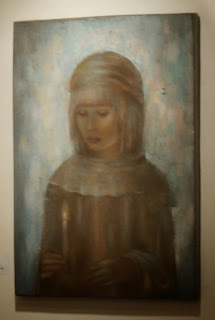 Maybe that’s a common thread – dread, insecurity almost everywhere surrounding the subject, the core, the saving grace, where courage and confidence exist, perhaps will prevail yet but at least survives. That core, that confidence, is an unmistakable humanity, our selves. 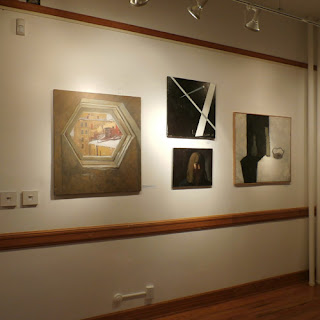 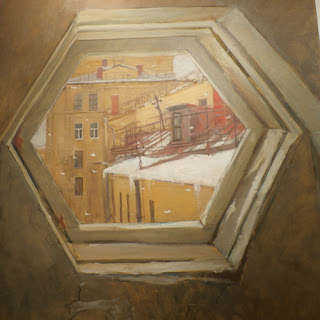 My favorite picture, was a porthole of what seems to be a seedy cabin of an aging luxury liner looking out on a snowy, winter city (I think I remember Minsk). Russia is a winter land. That warmth, the courage, the humanity is the frame of the porthole, where we are, the peeling wall paper enhancing our comfort as we look out on dread and anxiety and isolating chill is at the center of the image. It was almost the reverse of some of the other dialogs between confidence and confusion so many of these paintings were having. 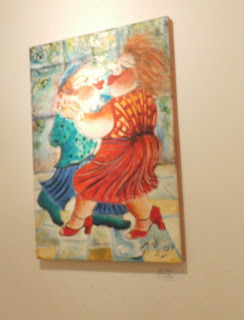 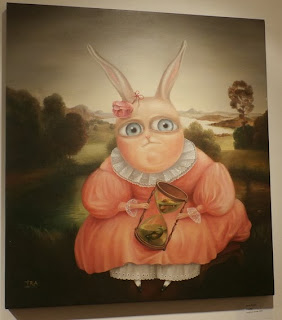 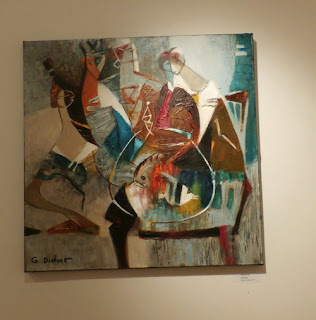 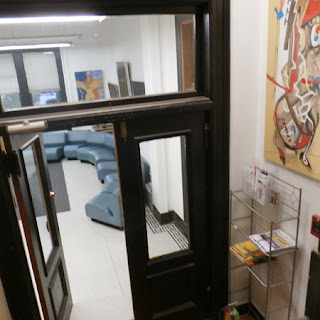 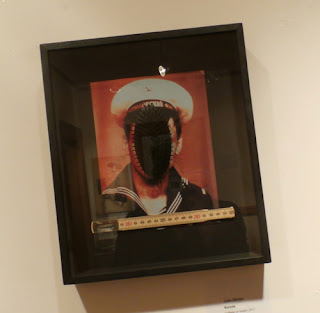 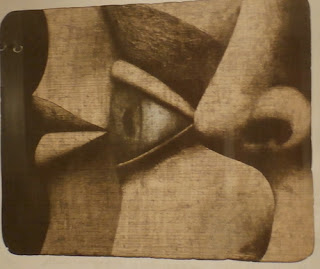 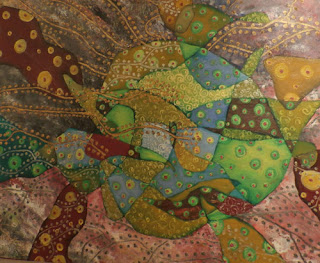 Russia hasn’t looked Russian in years. I’m pretty well read in the 19th century Russian masters of literature, but that whole world was shattered with the rise of the Soviet era – and all the different phases of that empire –  lots of different Russia’s from Lenin to Stalin, expansion and fall and even after, how different this country is now, seeming to edge towards the security of totalitarianism,  compared to say the crime-riddled capitalism of those early 90s .  The more you think about Russia, the more realize how diverse the culture and history and various “peoples” must be, and this collection reveals the diversity we are regrettably slow to acknowledge; the Under-Recognized Russian Women Artist tells us something about that complex diaspora, but tells us something else, something universal...  humanity that we share also compells us to endure. 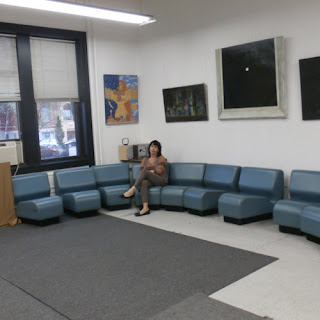