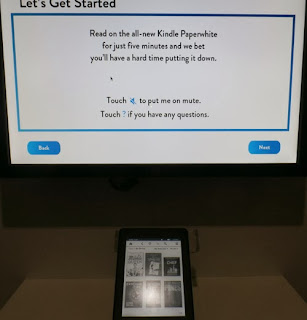 I have to admit, The Kindle tempts me, entices me, even vexes me and this vexing can be perplexing. 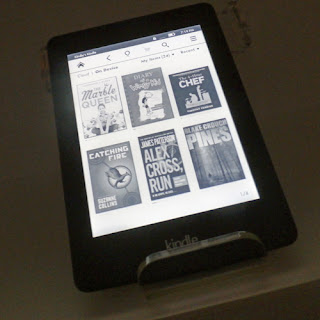 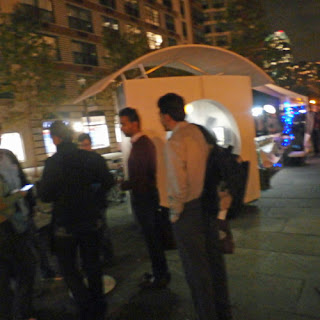 I read a lot and I’m not against reading on a device. How can I be?  Dislocations is unavailable in print form.


I have thousands of books in my apartment, and they are a pain in the ass to dust.  The apartment is finite but, like the universe, my library keeps expanding. Luckily, Jersey City has a great library but unlike the Amazon selection, is not infinite (and they even have e-books).


Every book I borrow is one more I never need dust.


The Kindle was at a recent Creative Grove.


Creative Grove was the first stop on the Kindle tour.


The Kindle tour is a grass roots marketing campaign targeting art events. The idea is that artists read and they want to introduce them to the device. Also, Jersey City has a newly opened bookstore and there’s another on the way (or so a sign on one of the under-re-development storefronts has claimed since spring).  They were not selling Kindles or selling anything, but maybe being the rare location where one bookstore is here and one is on the way, Amazon realized here was a ground zero to launch their counter-erosion of the print vs e-book market share conflict.


The Kindle cost $119, which is actually pretty reasonable and significantly lower than it first was introduced to the market. The new version features better lighting, said the marketer-teer. There was a stand with a Kindle for demonstration, a booth in which one sat and could experience the different illumination conditions. You  selected a book and then adjusted the ambient lighting, and adjusted the Kindle Screen lighting. I felt so optimized.


I selected The Great Gatsby, the closest thing to literature because I am such a snob and I am dumbfounded that anybody can actually read Dan Brown’s sentences. It was the not the first time I had used a reading device. You cannot exactly skip around like you can flipping pages in a book, but pretty close. The minimal dusting required was the main advantage in my opinion.


I will probably get one eventually, probably two years. I will soon join the growing horde of people reading on the PATH or in Starbucks on screens where nobody can tell what they are reading.


Other than that development, it is worth noting that Amazon found Creative Grove and that a little corporate  inclusion can go a long way. We are now SoHo, Williamsburg and Tribeca, hip demographic ripe for exploitation. I want my frozen yogurt store (oh that’s right, one’s opening on the corner). Is that what they mean when they say we’re becoming just like Hoboken? 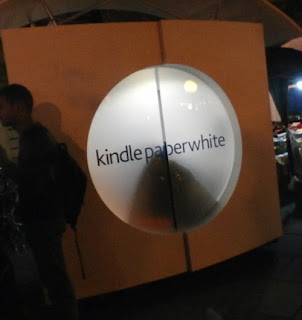 I order stuff off Amazon frequently, just like you. The thing with books though, the printing presses employed people, the bookstores employed people, the delivery trucks employed... well you get the idea. With the Kindle, Amazon gets richer and bigger  and the publishers and some writers and their editors receive revenue, but all the middle-men, all those jobs are never coming back. That isn’t mentioned in the booth where you can adjust the lighting to what ever suits your solitude.


Later at home, sneezing from the dust  from Algren to Zola as I calculated how much space I would gain by removing the shelves and all of those rows and rows of neglected titles pleading to be reread.
Posted by Mr. Tim Hrk at 2:30 PM