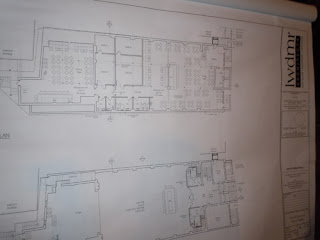 A JC-PAC? Not only does the acronym have a nice ring to it – say it fast – or slow: a Jersey City Performing Arts Center (actually a complex) – inspires the imagination.

White Eagle Hall, built in 1910 as a Parish Hall for Saint Anthony of Padua Roman Catholic Church, is on Newark Avenue and has been fallow for nearly a decade. For generations of immigrants, the building served Jersey City for decades, earning a rich, storied history. 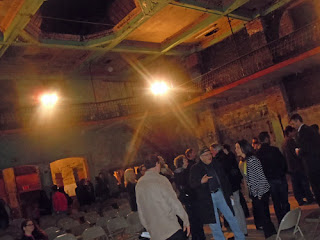 I actually have some partial research for a postponed blog on this history, but I am saving that blog for later.

Today the present seems more pressing, and that present is the ambitious future of White Eagle Hall, as envisioned by developers, who want to give this building a comprehensive makeover. Their innovative plan was unveiled at a community meeting, held inside the building on Wednesday night.

The plan – the word proposed was being bandied about so it seemed unclear what components remain tentative and subject to zoning and other governmental approval – is for White Eagle Hall to become a Performing Arts Center complex, that will include a 400-seat theater(800 standing room); two restaurants, art gallery, lounge and administrative offices. The name –White Eagle Hall – will remain the same and the time frame is to complete and open sometime next year, although the actual month or if the opening will be the entire complex of come in phases, was not specified.

More than a hundred people attended the a reception hosted by Ben LoPiccolo Development Group, LLC, the main entity behind the restoration/transformation. Besides LoPiccolo, Ron Russell, partner/architect at LWDMR spoke about the restoration – which was described as keeping the“wrinkles & cracks”, in other words, making sure the façade and other historical details are kept intact. The renovation aspires to transform the inside of the hall into the separate spaces, but preserve the charm, integrity and feel of the this early 20th century urban hall. Although the interior will be completely overhauled, other details will stay. For example the skylights and the ornate tin accents will remain, although instead of glass to the actual sky, they will now be self-illuminated. The iron railings of the mezzanine will also be restored to its bygone luster.

Olga Levina, who has been named, Co-Producer / Artistic Director of Jersey City Theater, Inc. – the entity that will run and handling bookings the PAC – gave an impassioned speech about the PAC, hoping that the new venue will be both “intimate and big,” and that it will bring a theater to Jersey City “that is ours.” She called on citizens, from artists to business people, to help in the new center. “We want to restore not just the building, but the sense of community,” embodied in the original White Eagle Hall.

Several audience questions revolved around art, such as will sculpture be allowed (it will). The building is adjacent to 4thStreet, a nucleus of the downtown art scene and of course home of the annual 4thStreet festival and LoPiccolo spoke of synergies between the PAC with the 4thStreet organization and the events it organizes – in addition, ongoing art exhibitions being part of the mission of the restored White Eagle Hall. Exhibitions could include gallery space, as well as a lounge area, entrance, and even the two restaurants planned for in the design.

Not so crowd pleasing was the parking issue. Parking concerns dominated the Q&A. The hope is to somehow secure about 300 spaces for the PAC, but since there are no lots of this size within the immediate vicinity (and even the small lots nearby are scarce), these spaces will be made possible by cobbling together several parking options via agreements with nearby businesses, schools and churches for their lots as well as having shuttle busses from other lots in Downtown (and the PATH), to further alleviate parking space shortages. Parking was the most emotional issue of the evening, and no one seemed satisfied with the parking solutions offered – even by those who were offering them. The fact of course is there are no simple parking solutions. There are too many cars and too many people unwilling to use mass transit alternatives. Bad as Hoboken is the oft-heard lament among residents and when they moan these words it is because of the daily nightmare shared by citizens of the mile square that borders chill town, where you come home from work and drive for hours looking for a space, finding one blocks away from your apartment. The parking is inadequate in downtown Jersey City, and whether a PAC is built or not, the parking problem will only worsen anyway. One wonders how much of an issue parking was when White Eagle Hall was hosting high school basket ball games and graduation dinners. Even a combination of registering neighborhood cars, having more strict enforcement – towing and high fees – for cars by others found parked on the streets, more lot space and more incentives for event attendees to use mass transit – seemed likely unable to appease those raising the parking issue. No one voiced concern about traffic congestion. Parking solutions will NEVER hold a candle to the innate and unquenchable ability of New Jersey Drivers to whine about parking. 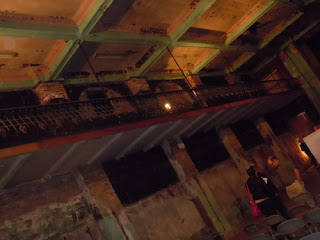 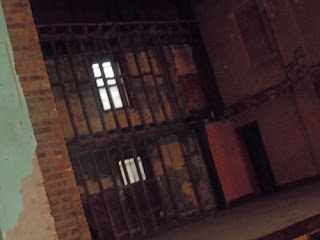 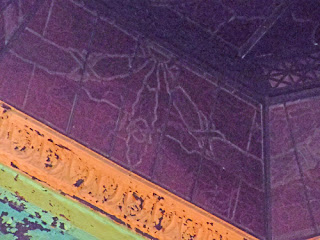 There was some concern that the PAC could evolve into a night club (second to parking as the fear voiced by the we’re getting as bad as Hoboken contingent). While LoPiccolo explained that a PAC is a completely different concept than a night club, and attracts a different audience, it is unclear how this difference was viewed by Jersey City laws and regulation, suggesting a range of other issues, such as cabaret license requirement and sound ordinance compliance, the resolution of which was left for the future.

Even the residents vocalizing parking and night club anxieties agreed the White Eagle Hall plan was “awesome”. Indeed, while the road from conception to completion is often less than direct and usually longer and more costly than anyone foresees, White Eagle Hall has been fallow for so long most people thought it was more rock formation than an actual piece of architecture that once fulfilled a community purpose. Owned by Saint Anthony of Padua Roman Catholic Church, and probably last utilized in 2006 (this is also unclear), it was sold by the church only last year, everyone assumed it would be transformed into another over-priced condo project, which has been the pattern (some might say plague) afflicting 21st century Jersey City. But a home-grown PAC, with restaurants, that reflects the history but opens up a future at the same time, people attending this neighborhood reception (we all knew each other’s faces if not our names), collectively felt a sense of… well, awe. It was like somebody finally visualized something we all imagined but never admitted to be possible.

The idea of this dream now becoming reality was nothing less than exhilarating. The developers used the reception to personally inform the community, let them get used to and be on board for the idea. Resounding applause concluded the event, and in the applause echoed the sentiment that several in attendance had verbalized – “this is the best thing that has happened in this neighborhood since I’ve moved here.”

And best of all, one of the official announcements was that Madame Claude’s – our very groovy neighborhood (byob) French Restaurant– will be one of the two restaurants in the complex.

As the project progresses, more news (and maybe even more Dislocations), will appear. And, like I said, when I get around to completing the research, I’ll post some thoughts on the history of this place. But, regardless of all that, getting to see the inside of this building was the real treat of the evening. I have never been inside, and even though it was still in operation into the 00s, since the 80s, that operation was steadily curtailed.

The front of the building is four stories high, but the back portion only goes up three stories. It sort of slopes, although that slope is sudden, not gradual. The building is longer than it is high. It’s oddly shaped, squeezed into a an geometrically innovative block, alongside a school and a lock company. Next store is a large shack that seems to be a garage exclusively servicing motorcycles. There is no back entrance to speak off, just fire and emergency exists.

The reception was held in the main expanse, the floor had the wood and markings of a basketball court that it was often used as. There was no heat, so the space was drafty and dark, illuminated by lanterns and exposed light bulbs in fixtures energized by extension cords, ironically shedding light on the existing fluorescent fixtures, rusting and long without current. The architectural plans, conceptualizing the renovation, seemed like a metaphysical contrast to the age and disrepair of the current space surrounding the plans and those gathered.

The decay was beautiful in a you can’t keep a good space down kind of way. You could hear the memories of old hall, the generations of immigrants, who with their offspring who came here to manifest community. The echo of these distant lives seemed embedded in the shadows. The past was still present. Through the veneer of decay, you could see the floral impressions designed into the metal of the skylines and the ornate accents along the rail of the mezzanine walkway, cheerful details amid the peeling paint and exposed brick. Somebody pointed out the lack of visible water damage – “The roof has to be good.” The most apparent aspect of White Eagle Hall is that this building still has much life to offer. 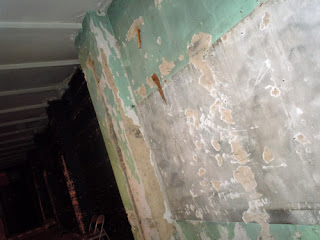 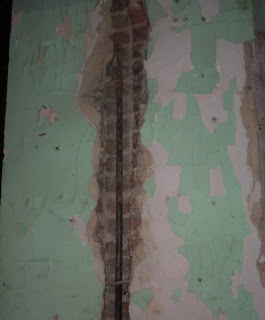 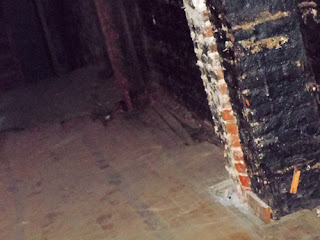 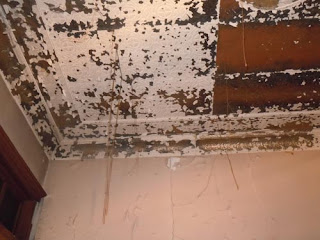 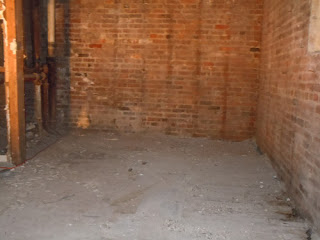 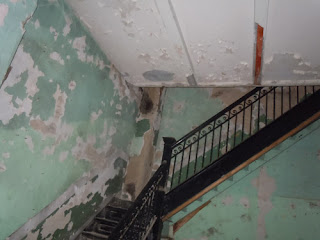 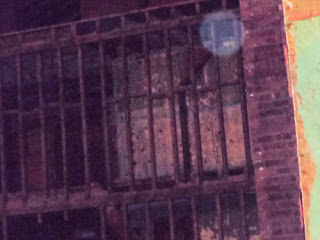 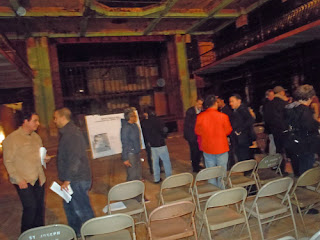 For most of us, it was the first time we were ever in this building that has been part of our landscape. Soon it will be a different inside than it is now. What this building was known for, why it lasted more than century, and why it was not torn down, like most of the structures that existed at its birth, was still noticeable – albeit with some imagination –now. For one unique night, a building’s past and future coexisted. A building between dreams. 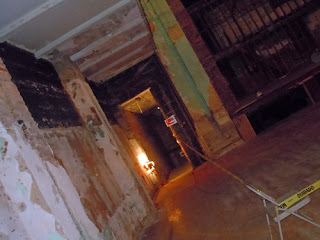 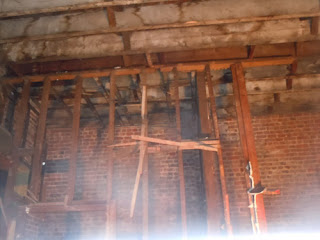 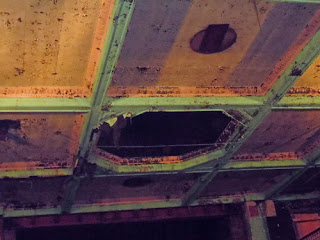 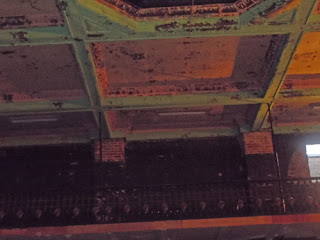 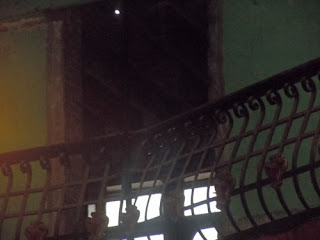 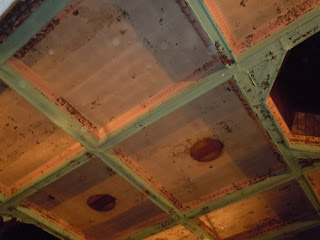 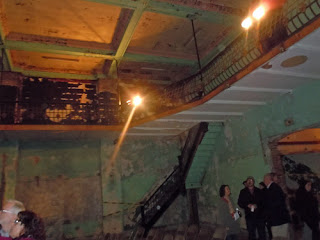 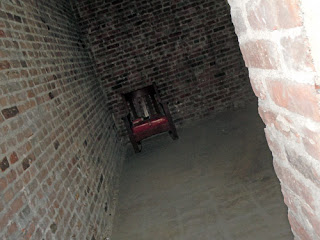 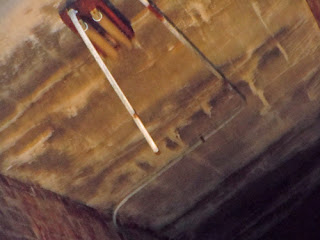 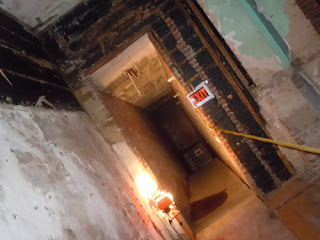 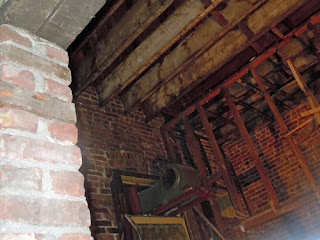 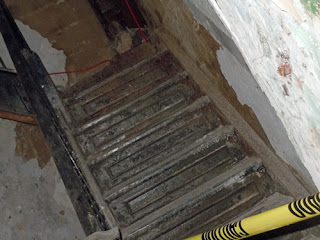