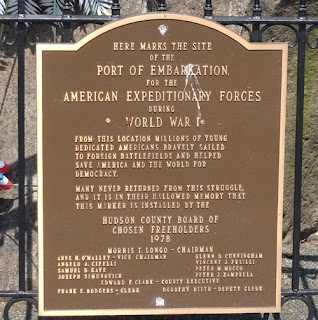 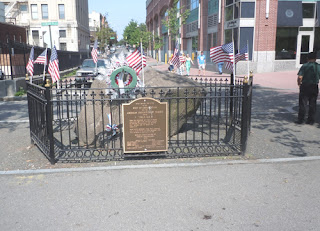 Flags and fresh wreaths decorated the entrance of the Hoboken Park, which is adjacent to the Erie Lackawanna Train Station, and offers specular views of the Capital of the World, Manhattan.


Hoboken the plaque notes was a major embarkation point for the dough boys sent over there, World War I. The names of the sons of Hoboken who missed the Jazz Age and the Great Depression are listed.


Around the base of the flag pole across from the WWI Not Forgotten is emblazoned on a monument. More sons of Hoboken are listed here, paid the ultimate sacrifice as politicians love to remind us. Memorial Day we remember them, or at least say we do.


The irony is that both World War I and the Vietnam War only made the military industrial complex more profits. Both conflicts could and should have been avoided, basically resulting from poor political leadership in America, our Allies and our Adversaries. Our leaders lacked the necessary political will to bring out about peace, war resulted, civilian populations suffered, protestors against the war were persecuted and after the military conflicts concluded, nothing was accomplished accept further hardship and the potential for more war, a potential whose reality was all too soon fulfilled.


I do not, but some say these things about all Wars. For World War I and Vietnam, there is simply no doubt. They were a waste of life and many at the time offered alternatives to war that went unheeded.  History is quite clear about the debacle that led to and resulted from World War I and Vietnam, two of the most bloody military conflicts our Nation has fought, both of which introduced new, more deadly and violent forms of warfare. I am convinced those Hoboken boys listed on those monuments were worth a hundred of any of the political and military leaders of both eras who made the decisions that cost them their lives. Two high a price to pay. 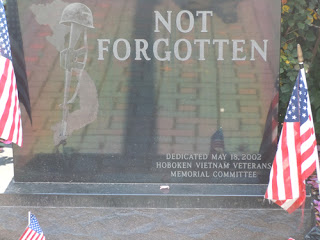 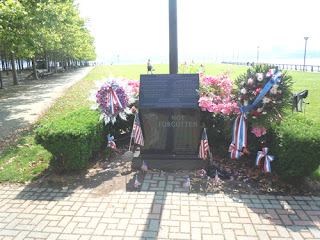 Between these two monuments is a fountain, actually a sprinkler. I never saw it in action before. A couple of toddlers in bathing suits were running around the spouting war having just a fun old time. I thought it would make a good picture of one memorial from another as seen through the jets of water. But the water was too thick, and one monument was not visible from the other. 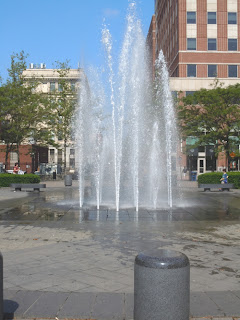