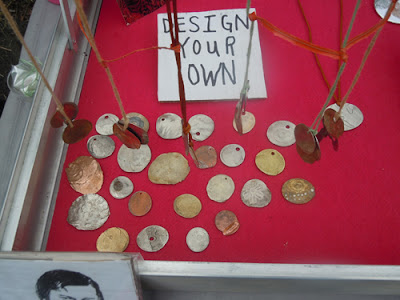 I noticed the metal shapes first. They seem to defy rules of geometry. Crush was the name of the art/jewelry. Coins and medals, left on the train tracks of our local Freight Train to run over and crush. These newly compressed pieces then have a small hole drilled into them, through which a string is threaded and wal-lah, necklace. Sorta hippie, pretty cool. One caught my eye, a Miraculous Medal of Mary, the impression of the familiar icon was barely visible, giving it a nifty antiquity veneer – was that an impression forming the image of The Blessed Virgin or just a glint that looks familiar. 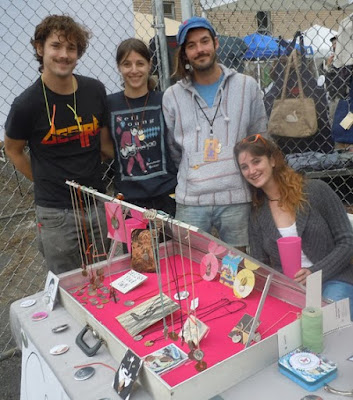 Band? The band’s name is Crush?

No. Thomas Francis Takes His Chances.

Sounded like a children’s book title. Everyone has nostalgia for things of their childhood but this current crop of young men and women are absolutely fetishistic about their lost pre-tween years. Maybe it means something else. If there is a reference to this name I do not know it. But they were nice folks. I’m a sucker for enthusiasm.

I was planning to come back to the 4th Street Festival anyway to catch some of the bands. Why not go back a little earlier than I originally wanted to.

Before they went on, the rain started, a pretty healthy downpour. I clambered up a nearby loading dock, within decent view (although obviously not for pictures) and decent sound. 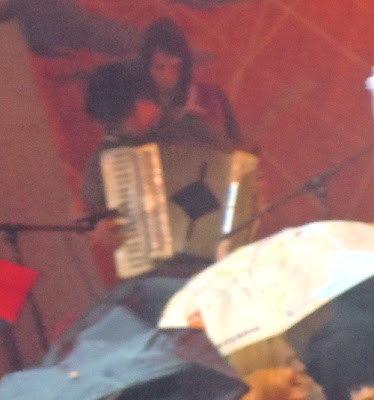 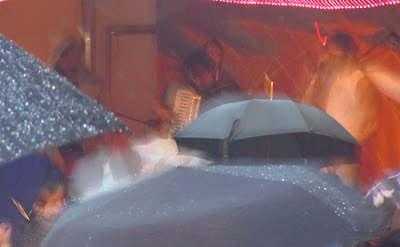 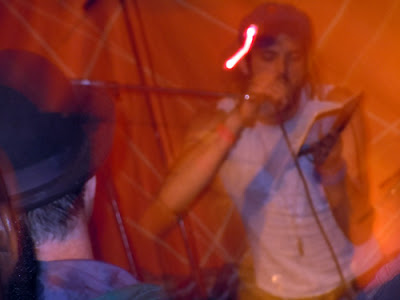 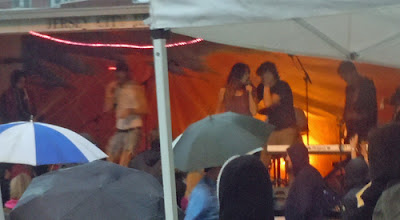 The band rocked, not that they played typical rock and roll. The early songs sounded like progressive rock pop, but with a harder edge, as if the Sex Pistols were playing Queen songs.

The keyboard was the bedrock of the sound, especially when the pop teetered towards very twisted Kurt-Weil-on-meth cabaret. The lead singer, tall, skinny, wild eyed was antic, at times deranged. A lot of jumping around on stage, by the musicians. He was singer and ring master.

Another player, a real multi-instrumentalist, switched from washboard to according to trumpet to trombone – when he played the trumpet, in the middle of a cabaret type number blew forth what sounded like an Alan Toussaint/medicine show horns. They mixing genres freely, madly and yet it all worked. The accordion though was the multi-instrumentalist’s forte instrument;on another song, the dialog twixt the keyboard the squeeze box was a truly interesting, they made the complex seemed simple but there was a lot of substance with their interplay.

Thomas Francis Takes His Chances was having a hot set at 4th Street.

I struggle to describe the music because it was original and a lot of fun, filled with ideas, often zany, sometimes disturbing, always provocative. Out of chaos came order and the shifting back and forth between dissonance and harmony was thrilling to follow.

Towards the end of the set, they went from what seemed like Island record era Waits into spoken word/rap. The lead singer was reading from a notebook. The audience was cajoled into raising their hands, like a house party. Genres collided and then adapted. The collision and the cohesion was part of the fun. You became unsure of when one ended or the other began until the question itself was muted by the sheer intoxicating energy of the music.

One of the few songs I got the title to was Dirty Surfers, which began with a roaring, credible surf rock riff and then it dawned on me how to describe what I was seeing – a Gen-Y B-52s, with better musical chops though. How can they shift gears and mix genres so adeptly? These cats can play!

The downpour got heavy before turning into a drizzle and eventually fading away. The crowd stayed in front of the stage through the entire set. Many already soaked, eschewed the umbrellas and danced. The music was made to make you move. I clambered off the loading dock to get close to the stage, to try and get a better picture but also, I wanted to fully experience this music. The pictures aren’t that much better, sorry.

A few dozen people stayed through the rain to listen and dance and enjoy. How many bands can inspire that kind of commitment? I still don’t have a clue what Thomas Frances Takes His Chances might mean, but their music was extremely entertaining. It was worth being rained on to hear. 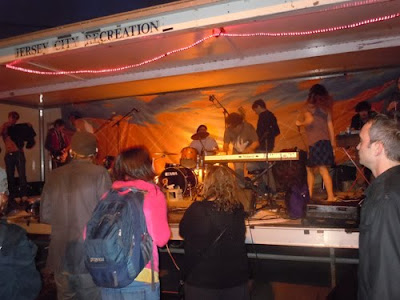 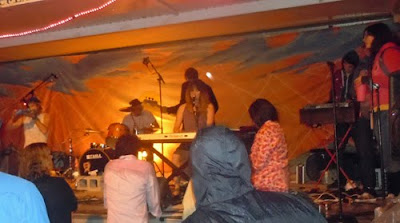 
What looks like an abandoned blog:
Posted by Mr. Tim Hrk at 9:04 AM