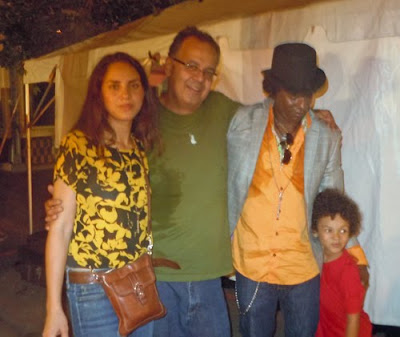 The song the trio opened with had an explosive groove that would be quite at home in the Stax studio. Then Ladell McLin (website) let it rip on the guitar. He grabbed the audience and didn’t let us go. We were glad to follow, happy to be throttled.

HE PLAYED LOUD – a volume appropriate to the integrity of the American-born art form called the blues. Ladell suffered with a severe and all too sudden bout of set-us-interrupt-us the last time he plugged in at Grove Street, and tonight, a combination Groove on Grove/Creative Grove, he was on fire right out of the gate and that fire roared the entire time he and his bass player and drummer were on the six inch stage, which was underneath a tent, the sure signifier that this was special night – in addition to the GOG & CG mash-up it was a JC Fridays art crawl evening – and maybe the tent enclosure muffled the sound circumventing the ever present noise complaint threat.

This musician was intent on having a great set and that is exactly what he accomplished. The sudden blast of volume (it was as loud if not louder than any Grove Street gig I’ve heard) from his searing playing seemed to be making a statement, his hard rocking blues took a stand: The blues is America, the blues cannot be stopped and it should rarely be quiet. He affirmed a simple fact – this is space is a public space – and there is no music better than that which flows from the deep muddy soul of the USA.

Ladell was introduced as “the best guitarist in Jersey City,” and he spent the next 45 minutes proving that to be the epitome of understatement. This cat can play. I’m pre-disposed towards the blues (my Howlin Wolf tribute/doxology here), and especially the Delta strain, a tradition Ladell fervently upholds, which is guitar-centric, and the blues is not a favored genre by most musicians of the current generation. I noticed more than one local musician watching him. In the parlance of our times, Ladell was showing them how it’s done. 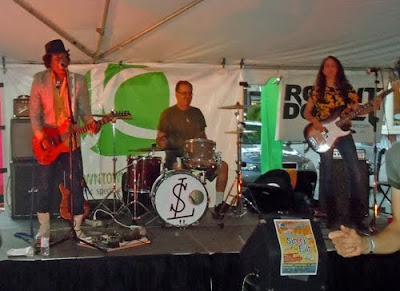 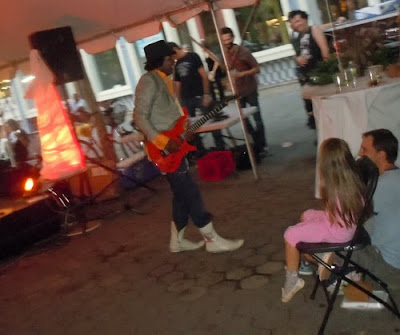 Buddy Guy, Robert Cray, Stevie Ray Vaughn and a large dose of Hendrix… come to mind. His solos sting. He at times can be flashy player, but that is misleading. He may be hot dog prone, but the gutbucket and soul he is sincerely expressed. He packs a multitude of musical ideas into his jams. Each is given its due and they never seem tangential. When he added feedback and echo, it wasn’t flash for the sake of flash. Each sizzle only enhanced, was never a replacement, for the soulful steak.

He has a lot fun with that fender, wringing every possible emotion out of each bended note while pressing and tapping the various pedals with white leather boots. The noise he made always was in submission to the purpose of the song and his sonic flamboyance never strayed from his high standard of musicianship.

After two hard blues rocking openers, he got into snakier groove with Hooked, an ode to the power of lust, which not only can be destructive but sometimes seems cosmological. The woman has narrator “wrapped around and around your little finger.” He can’t quite escape and in the end implores aid from the almighty, “My God is a Jealous God, but you got my head spinning round.” Ladell puts a new twist in the sin and salvation dichotomy intrinsic to the delta blues.

He revved up Mona Lisa, another song off his debut CD, which is a love song to the woman in that famous painter, to whom he declares: “you look just like my type, if I could be Leonardo, I would never let you go” , the song culminated in a riveting drum solo, out of which, a blues rocker emerged at break neck speed. The audience was in awe, roaring with delight.

During another song, Play the Blues 4 U, a sultry seduction number where he promises the girl, “all your loneliness I want to soothe, I’ll play the blues for you, he left the stage and did just that, playing his guitar in front of individual members of the audience, a piece of showman ship likely copped from Buddy Guy.

A new song – it’s not on his CD, which rocks – had a more free-form format, almost avante garde. It’s a nightmare vision with an arrangement that reminded me of a looping shuffle of John Lee Hooker. “I’m in Love with the Devil” he began, then at mid-point, declares “I’m going down South, I;m going to the Mississippi.” Was this fevered dreamscape a cross-roads or something more desperate? This song was filled with dark mystery and longing and like most mysteries that live on the dark side, lust is never far from being either cause or effect. In a spine-tingling ending, Ladell switches his his voice (which mostly resembles Jimi Hendrix’s) to a high pitched falsetto: “help me, help me.”

What a freakout! He took us on an eerie journey where the only certainty is the chill of the unknown: the guitar was both the lone light that guided us as well as the darkness surrounding the beam.

The set ended with the more classic R&B groove it started with, Stand Out, the title track of the record, and the bass player took some of the vocals. She laid down a rock steady rythmn throughout the performance. She was marvelous (not to mention extremely hot and beautiful), but I didn’t catch her name. The drummer was called George. Ladell might be the leader and occupies the spotlight, but the trio was amazing.

A lot of bands take the retro route, re-creating beloved genres. The hard blues rock Ladel asserts, reminded one of a number of classic bands, from Cream to Robert Cray, who themselves also revived their own versions of by gone blues – that dark muddy river of love, suffering, desire and redemption that is as American as Walt Whitman and remains at the timeless core of the human condition.

Ladell does something that a lot of musicians of his generation who take the retro route fail to consider: He moves the story of the blues forward.

“Make some noise, Jersey City,” said Ladell to a crowd already erupting with cheers, hoots and applause. “That way we both get in trouble.” 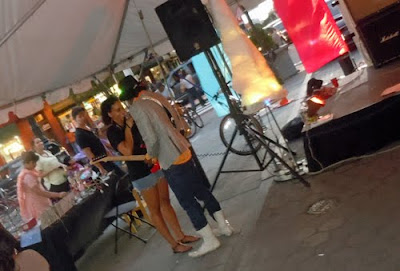 Maybe Ladell moved us forward too. 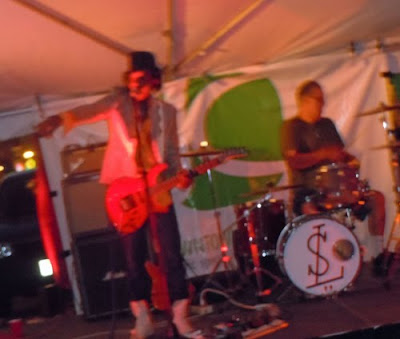 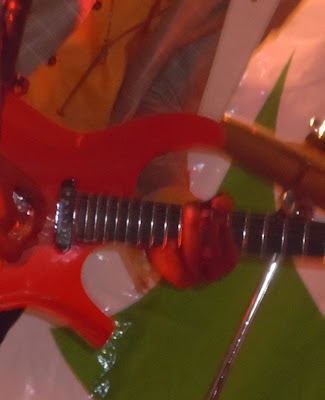 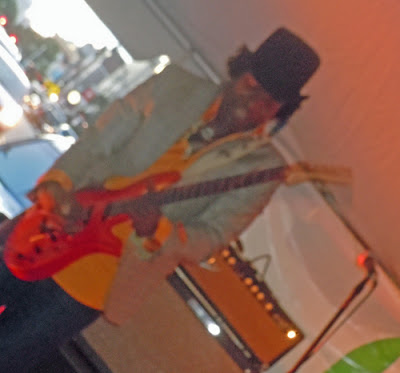 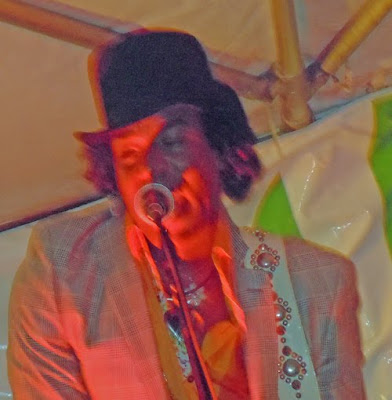 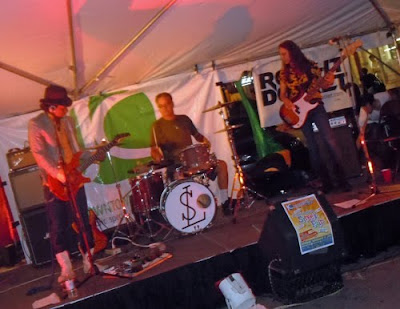 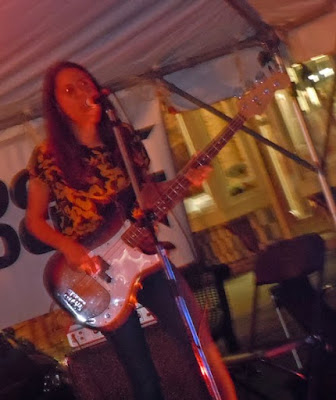 Here’s a bonus shot. Ironically, a couple of days after the set-us interrupt-us incident, I saw Ladell busking nearby Union Square. 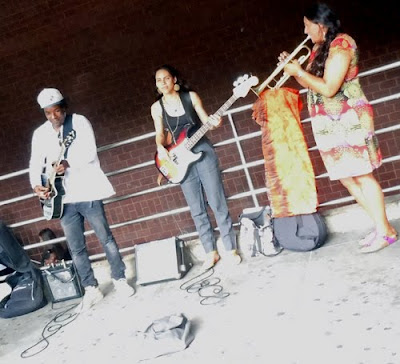