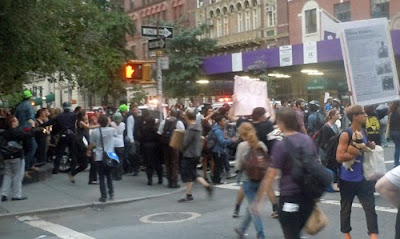 We crossed 5th at 10th street, heading towards the PATH. Up the street we saw a crowd, signs, some kind of demonstrations, three blocks away. Bursts of police sirens, quick, starling riffs, nothing sustained. We continued walking, but then we heard them getting closer. We wanted to hear the chant, which sounded garbled and long, a little more complicated then a hell no. We saw some of the signs, like Racism Kills. 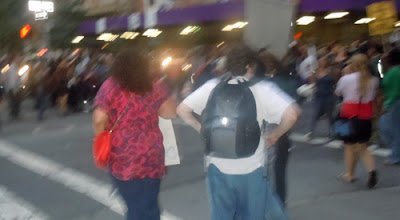 It was for Troy Davis, who died today. Executed by the state of Georgia. The case was controversial, witnesses recanted testimony. Nothing could delay the execution. I’m opposed to the death penalty, but hadn’t followed this case as closely as I should have. When I saw some of the outcry on the internet, and the failed attempt of the previous few days to halt the killing, I was surprised but only because I hadn’t followed it.

The NYPD weren’t breaking up the demonstration per say, they seemed to be pushing them towards Washington Square. No one was being arrested. The cops formed a wall at one point, some of the kids were cursing them furiously, giving them the finger, taking all this anger and general guff for this murder sanctioned by a southern state. It was a melee. It was like the 60s.

We live in strange times, changing times, said my friend. Demonstrations on Wall Street because the economy sucks and the bankers got away with theft, demonstrations around the UN about the Mid-East. Up-rises in Europe, throughout the Mid-East. World-wide, just like in 1968. Why should we be immune to revolution, and if not outright at least social unrest, leading to upheaval.

There’s an anger that was around a few years ago, a willingness to act on that anger. The sense of desperation is growing, brewing for a long time. Some kids scuffling with the police over an issue they feel passionately about. I guess that isn’t new. But there were about 300 protesters, a sizeable number, especially for what seemed like an impromtu display of outrage. I saw a young Asian woman crouch down and give the police the finger and cursed at the top of her lungs. The police, professional, ready, did not look happy. In a situation like this, one mishap could lead to tragedy. 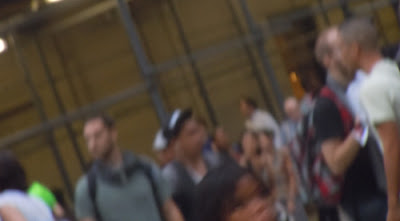 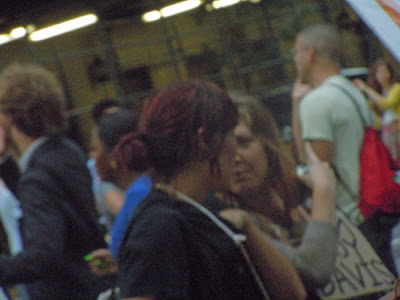 The new order is not arriving peaceably.

We walked to the PATH, apprehensive about the meaning of what we just witnessed