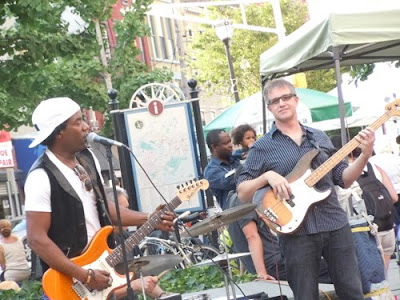 I was planning to give blogs about Creative Grove a rest. I only blog about music that impresses me.

I love the Blues, Howlin Wolf (an appreciation is here) has long held a top rotation spot in my personal listening habits and, alongside Whitman and Dylan, he’s a major American Artist. Out of all the bars by which I judge musicians, I may hold blues the highest.

In any event, this blog needs another picture of an “indie” musician playing at the Grove Street open air plaza like it needs a hole in its head.

A live music performance at Creative Grove is uncommon, and I was looking forward to just hanging with friends and neighbors and listening to some open air entertainment without intent to blog on a splendid July Friday afternoon.

By the second song or the Ladell Mclin Trio (website here) though, all I could think of us, this cat can play guitar. He channeled the complexity of a Hendrix but eschewed the indulgent feedback pastiche that I feel weakened this master’s most well-known work. Ladell’s playing was subtle and intricate supported by the gutbucket foundation laid forth by the drummer and bass. I may even emitted a hoop or oh yeah.

I got out the Nikon, this band was blog-worthy. Then, I leaned forward, excited to take in the proceedings.

The next song’s melody line was based around Tail Dragger, the Howlin classic. Swampy back beat. The groove was laid down and its momentum grew with each new, stinging note on the guitar. The trio pushed the set to next level. Anticipation doubled.

Then somebody with a clip board – always a bad sign – comes up to Ladell. Audience members and the usual Creative Grove vendors murmured to each other.

Ladell stops singing, looking for guidance from Creative Grove organizes. He stops playing the guitar, then the bass player and drummer cease. They put down their instruments. No more music for us.

The buzz-kill clarion call familiar to all live music lovers in our fair city had once again been heard: Noise Complaint!

The other day at Groove on Grove, mid-set the organizer came on the stage asked everybody to get closer because they had to lower the sound. Half the audience left and unless you were on the stage the music could barely be heard.

As more music, and better music, increases so do efforts to stop that music, maybe it’s just to turn it down but the question is how loud is too loud, when is loud too loud and if the turning down has the same result as ending our joyful noise, what indeed is the difference?

It happens in other parts of the city and I’m sure the complaints are often justified but at the Grove Street open air pavilion, some of the residents at Grove Point are intent on stopping fun and ending music.

The scuttlebutt is this: One or two GP residents have a decibel meter and when the music goes above the legal level they inform an event’s organizer that they will call the police.

Since the permit situation is already precarious in J.C., nobody wants to challenge the assertion.

Of course, both Creative Grove and Groove on Grove are not exactly late night events. Ladell’s Set was at 6:30 in the afternoon. The music must be above a certain sound level just to be audible above the din of buses, trucks and other vehicles as well as the constant stream of commuters the PATH spews. It is not a library and far from the placid setting its name – Grove – implies.

Urban noise is a real issue and everyone deserves quiet. Years ago I had a tenant, who has since moved out, who blasted his crappy music. Other tenants complained, so it wasn’t just myself asking the landlord to get him to turn it down. You feel like a real tool, a crabby senior citizen, when you complain, but what are you going to do when some inconsiderate yahoo blasts House loud enough to make your windows rattle at 1:00 AM on a weekday?

Ladell's band didn’t seem overly loud to me – you could still hold a conversation with the person next to you. In the context of all the other sound typical of this public space at this time of day – late afternoon – the noise complaint seems about another issue on the part of the individual issuing the complaint than decibel level.

Something else is going on. For now, the complaints are obviously given more credence than the rights of event organizers at Grove. Is the Grove Street Pavilion a public space or the private patio of Grove Pointe?

After the music was stopped, this was the topic of discussion as the would-be audience dispersed. It’s a fair question, one the city has to yet to adequately answer.

Does somebody who owns or rents a living space alongside a subway stop and public space have a right to absolute quiet at 6:30 PM on a Summer afternoon?

Well, these are the issues that rising to the surface again in our fair city. Jersey City has a conservative past, Mayor Hague was famous for “banning” Rock & Roll and there were always problems with Roosevelt Stadium when it had concerts and in more recent times, there’s problems with permits for dancing and stuff. But this new generation has different expectations of government and are eager to upset the status quo.

The city is promoting itself, at least downtown, as some new enclave for Gen Y, trying to make Newark Avenue and its environs an arts and cultural center. Creative Grove and Groove on Grove have been important components of that objective, as have the 58 Gallery yet all three have been hindered by complaints of noise and threatened with legal consequences.

How long can the city continue to promote itself as art friendly while simultaneously stifling art events?

Uta Hauser, chief organizer of Creative Grove and an ever-stalwart promoter of the arts in town, is currently on vacation in Germany, her native land. The complainer called Uta in Germany, who then called the people covering for her, who then forced Ladell to stop his set. So, yes, the noise complaints against the sound levels of music have reached international incident proportions. The music lost.

Ladell was cooking and sounded great and I can’t wait to catch a gig by his trio somewhere music is welcomed and appreciated. 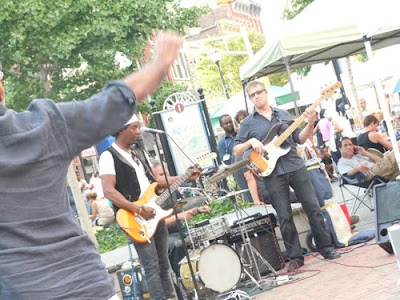