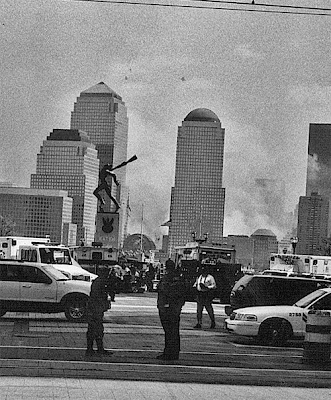 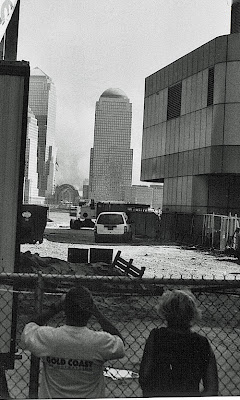 About These Photographs: I’ve written abut 9-11 here and this year’s 10th anniversary ceremonies here. It was a horrible time and I have a diary I kept during those days that I am going to do something with, and originally I was going to put excerpts from that on the blog, but decided to wait and perhaps create another project. In the meantime, these black and white photographs have never been published before and in fact, they were only recently developed. I used to have to take a lot of pictures for work, black and white images for print. On the precise day of 9-11, I took pictures with color film of Exchange Place. Those pictures have circulated. But 9-12, 9-13, I had run out of color so I put a roll of black and white I had left over from an assignment into the Minolta. I never got this roll developed. I hadn’t finished the roll, after seeing the color shots, enough was enough. I didn’t want to look at these pictures anymore. My work life didn’t require a camera, I hadn’t yet revived any hobby interest in photography and when I started Dislocations, I bought an inexpensive digital. For 10 years, this Black & White film remained in the Minolta until the end of August, when I decided as a celebration of the 10th anniversary of the Terrorist attacks, why not see if these pictures could be developed. It took more than three weeks; getting BW film developed these days was not like it was 10 years ago. I don’t think I waited more than 24 hours for the color 9-11 shots. So I missed the 10th Anniversary 9-11 Weekend. Thinking about 9-11 now is a little like hearing a Christmas Carol in mid-January, nonetheless, here they are, perhaps a preview of another project down the road.

People came down just too look, in disbelief, at the smoke. I’m not sure if it is the black and white film or the fact it was in a camera for a decade and some deterioration occurred, but you can’t quite make out the contrast of the smoke against the sky, which had become overcast. The one friend who has seen these shots told me the smoke looks gritty. I remember how gritty if felt. 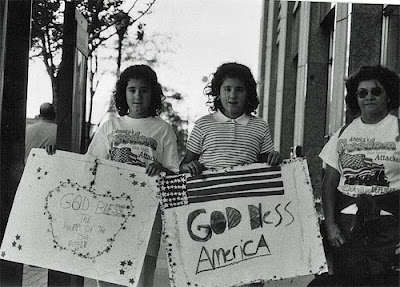 I remember taking this picture, I guess these girls are young women now. Look at the T-shirt the mom and one of the kids are wearing, already commemorating the event. This was like only the next day. I forgot about that. Silk Screening is the first responders among craftspeople. 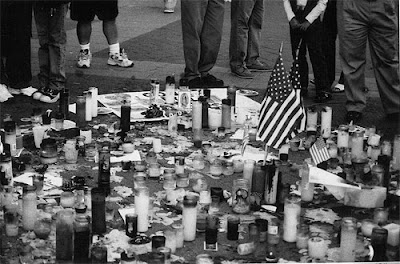 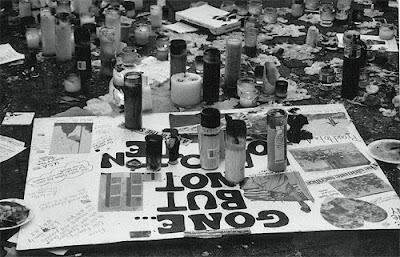 The first of the impromtu public memorials, soon to proliferate and remain for weeks and weeks. 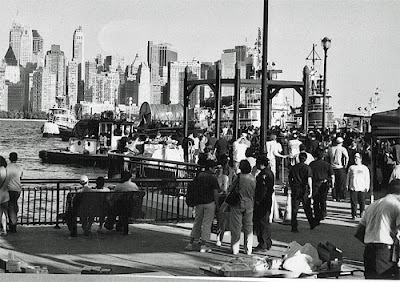 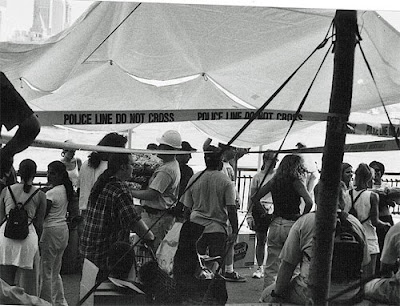 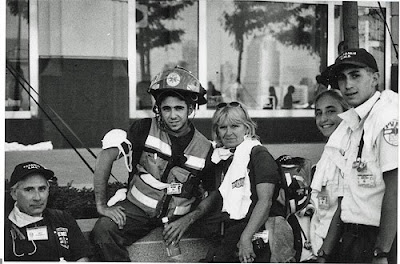 The Paramus Volunteer Medical Emergency crew. Paramus is my home town. During the days of 9-11, all the New Jersey towns responded, sending their crews and vehicles. They were still hoping for survivors, and the helped with the dig, the first day of the dig, taking ferries across. I talked with them about the devastation they had seen. 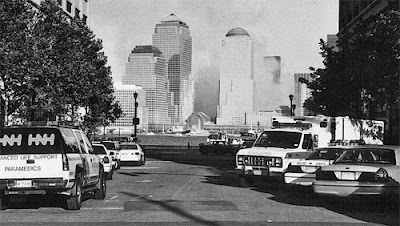 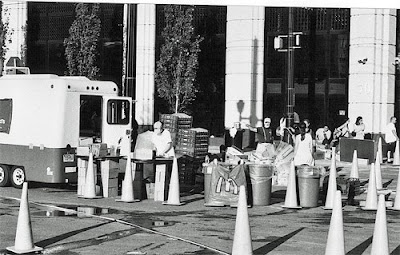 Few survivors arrived. We waited and waited. The rescue effort turned into a staging operation for the big dig, volunteers being ferried to Ground Zero from Exchange Place, then back again.