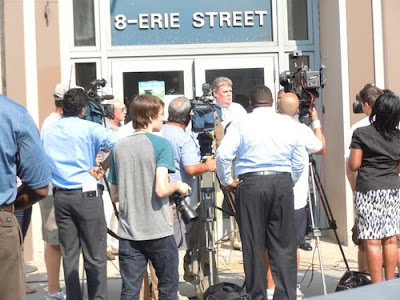 A slow news day, nothing other than the heat wave to report? The tragedy of the abducted murdered child in Brooklyn last week still fresh in the minds of the local news media making any potential child abuse story – unfortunately, no dearth of which exists in New Jersey – of feverish interest? Or has the influx of new residents to J.C. now being recognized by the media and they are responding in kind?

Yesterday, it was late afternoon and I went for a haircut on that place I go to on Barrow. Across Newark, in front of the Police Station on Erie were news trucks – 2,4,7,5,11 (where were you 9!) -- their large antennas erect, satellite dishes pointed to the sky. No one hanging around Erie seemed to know why there was such a large media presence.

In the barber shot, like everywhere else, they have the TV on, constantly. Live at Five teasers. A school bus parking lot on Newark Avenue appears on the screens. It was the story about the special needs student left on a bus in this heat – he was admitted to the hospital and is fine.

After the hair cut, I walked down Erie to see our chief of police came out, in front of cameras and microphones, right there on Erie Street.

I don’t like these TV cameras in town, they attract a bad element. What’s next, celebrity sightings!

The chief handled the press admirably. He’s a good guy. He stood in front of the Erie Street Station. Rumor is they are going to sell the building to make up revenue. Just what an up and coming city needs: fewer police and police facilities and more ugly condos! Interesting choice of setting for this rare Jersey City Live at Five photo op.

Reporters asked the usual questions about the incident. Not much could be said. The nature of the current state of the fourth estate: you could see disappointment that this story could not be further sensationalized. That’s just the way that goes though.

Why does no reporter have the brains or the balls to ask the republican congress why was job growth unprecedented in the 90s when Clinton raised the tax rate on the wealthy yet they deem Democratic proposals “job-killing tax cuts”? How come no intelligent analysis – shit, no analysis whatsoever – about the allegations surrounding the current state of the economy crystallized in the debt ceiling debate. The Live at Five gang is all too similar to the Washington Press Corps, the stuff you see at the daily news-briefings, etc.

Not everything fits into a sound bite. We the news audience people are as much to blame as those news cameras on Erie looking for a child abuse story to beat out the Live at Five competition.

In the barber shop, after the teaser about the special needs child in Jersey City found in a bus, a shark attack in Long Island story was also promised.

No one asked about the closing of the Erie Street Cop shop. The chief talked for about ten minutes, including the brief Q&A. Then the media packed up their vans and drove out of town. Nothing else happens here other than child neglect, either real or potential.