Something About a Train 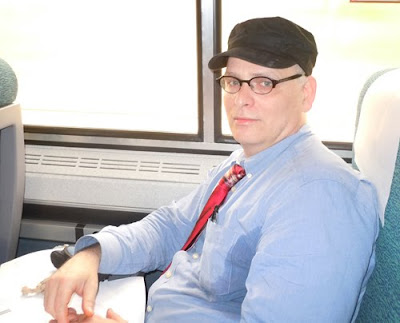 My colleague said I wore my engineer cap. I have a head for hats since my hair is “starting” to thin and since the Mets are just too tragic to sport their logo this year. I needed a new warm weather cap. I bought this jaunty chapeau for five bucks at some midtown store. It was only after my friend’s comment that I realized it was indeed similar to an engineer’s cap. He took this picture of me on Amtrak. We had a day of work in Washington D.C. and the high point was riding the train, which was clean and sold out and running on time.

I love Amtrak. I don’t really have a pithy insight other than that. It’s a national treasure. Okay maybe Europe or Japan have better high speed passenger rail, but Amtrak is better train systems than Bolivia or Kenya! Amtrak always gets better and it gets an unfair reputation. We should be proud of this nationwide transportation system; air travel may be faster, but it is often excruciating and always humiliating. Buses? Forget about it. Car travel isolates, it’s not a transporting form of transportation. No matter where you go there you are in your car.

I’ve been busy of late; grueling days at the day job impeding my blogging in the short term. The day of work in D.C. was quite intensive. The three hour train ride made it worthwhile. Until recently, I had a steady gal in southern Virginia and took this train about every six weeks for near a decade, my romance of train travel is multi-layered. Yet, despair dissipates when I’m on the train. Only sweet memories persist.

I read, do some work, look out the window. The rolling of the train on the tracks, the consistent rhythm that so inspired Johnny Cash’s sound. I know a few dozen train songs. When I hear that whistle blow I never run out of tunes to hum. 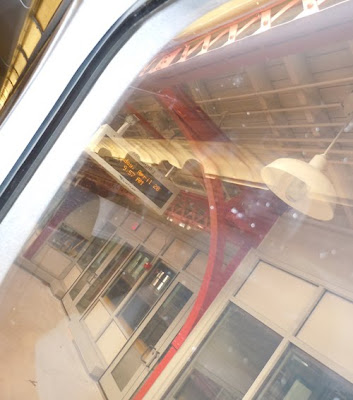 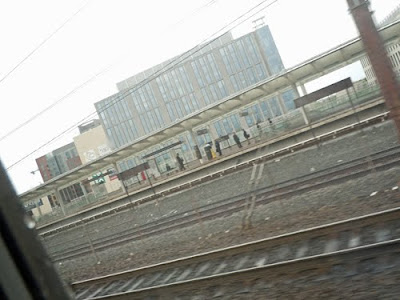 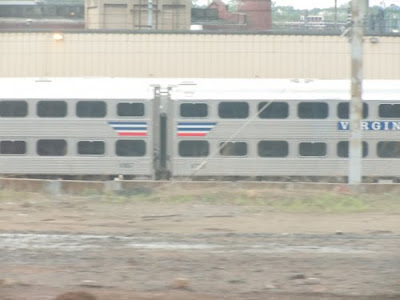 Several cities campaigned to become the nation’s capital, but with tensions between the north and south becoming more apparent, Washington D.C. was selected because of its mid-Atlantic location, a compromise solution. In reality though, it’s a lowland swamp, similar in topography to the South. In many ways, with its wide boulevards, circular layout and the proliferation on neoclassical architecture, D.C. is very much a southern city. Riding the train down, you can see the landscape change, hill country of the northeast fading into swampier lands, a few miles more and you start seeing the Southern bogs of the tidewater region. Truly an alien land to the union soldiers who came here to keep our country united and in the last two years, enforce enactment of the emancipation proclamation. For the first few years, they were mainly protecting the capital. How different a city from the Northern climes they came from.

Trenton and Philadelphia and Wilmington... empty and decaying factories and warehouses. They built these places near railroad lines. Grimy and often alienating work, they provide real jobs and grew the middle class. That era has long passed. The fallow structures, the long-broken windows...vestiges of a full employment past, remnants of an America that used to be... amazing how many you see... the jobs never came back.

Then you get close to the station, the only place where you get a decent picture really and you see more rail road. Other train lines, different cares, web of tracks. Always fascinated with the systematic nature, the planning to make the trains run and the effort to make them run on time. From the gauge of the tracks that fits the wheels, the design of the cars to hold the optimized number of passengers, the horse power in the iron horse locomotive designed to pull the number of cars needed. Design skills necessary beyond any single individual. Precisions seems antithetical to our humanity, but the human spirit enables us to create the vessels of precision allowing the rest of us the pursuit of happiness. All just so I can doze off with America passing outside and dwell in romantic memories and wake up in our nation’s capital that despite the problems and the power still pays tribute to Freedom and Democracy, aspirations that mark our collective and individual souls. This is the land I love best.

It’s true for NJ Transit, but it is really true for Amtrak. The workers you encounter, the conductors and engineers, they all love their jobs... apparent, remarkable and notable because it is really rare to see workers who like what they do. They bid farewell to their fellow travelers, together for a pleasant journey.

Nothing special, except we arrived safely and on time and now the only thing shared is the memory as we embark on tasks away from the tracks.