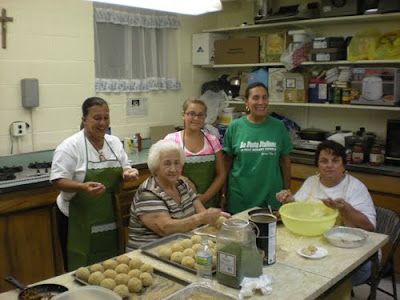 600! That’s the sales estimate of Rice Balls for the first night of The Feast. This is not just a record, but exceeds by more than 100 the highest amount of rice balls sold on any night of the Feast.

I wrote about this last year here. I of course went to the Rice Ball booth first and this year they are indeed as awesome as ever.

As much fun as there is to have at the annual Italian Street Fair, I don’t think anybody has as much fun as this multi-generational female crew here in the kitchen. The Feast has been going on since 1912. I’m not sure if the Rice Balls have been part of it that long, but they have been part of it for as long as anybody alive can recall. These women are here in the Rectory Kitchen of the Holy Rosary Church every summer, placing the browned ground beef into the Romano cheese and rice, shaping that into a ball, rolling the balls in bread crumbs. They are fried fresh outdoors at the Rice Ball. These are absolutely without question the best Rice Balls you will ever have. But I digress. These women are having the most fun because they continue a tradition, not just of Italian Peasant cuisine, but of giving back to the community. Katie, the ringleader, told me she was born here, baptized at the church, grew up around the corner where she still lives.

I’ve been around Italian-Americans and Italian American culture my whole life. While the king may receive deference and respect, the power behind the throne, the real strength of the kingdom, is in the kitchen. It’s entirely matriarchal. This feast honors the Assumption of the Virgin Mother, which is like rooted in some heavy Catholic mysticism, so it seems appropriate that the maternal nature of the celebration is echoed here in this kitchen, which was filled with laughter and joy—not to mention the utterly delectable aromas of Rice Ball production—and rapid fire wisecracks.

“You’ll go to heaven, all the work you do here.”
“We’re not doing this to go to heaven; we’re doing it to raise money.”
“Maybe it’s a plenary indulgence.”
“That’s right, I’m rolling Rice Balls for the Souls in Purgatory.”
“A lot of people don’t believe in purgatory anymore.”
“Of course there’s a purgatory. The way people live these days, you think they’re going straight to heaven?”

I tried to take an action shot, because I like candid, but that didn’t seem to be happening. Even they posed they were still working the rice. When the crew got into position Katie said, “Make sure you get the 4C bread crumbs in the picture.”

Then I was told, they sent 4C copies of my blog post on the Rice Balls and 4C sent them coupons. I may not get that Pulitzer, but I’m able to get bread crumb coupons for a good cause. But the fact is, while my bread crumb needs are few, I’ll never use another brand. After meeting these women and eating what they prepare, only a fool would fail to follow their bread crumb recommendation. 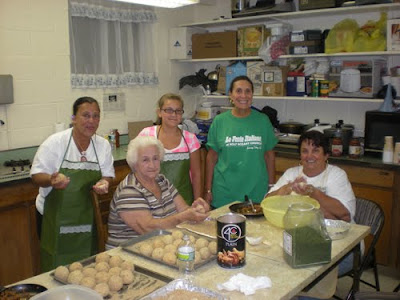