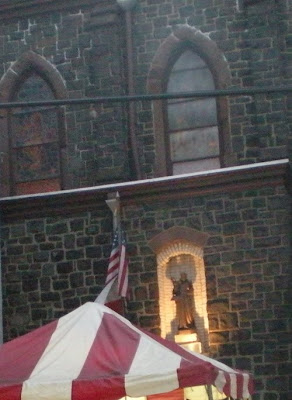 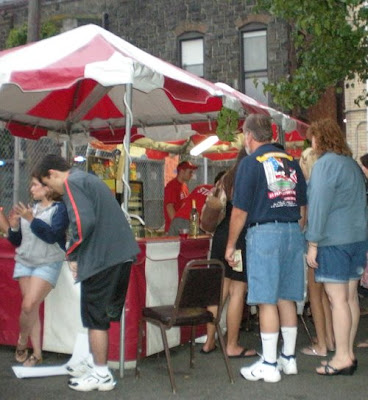 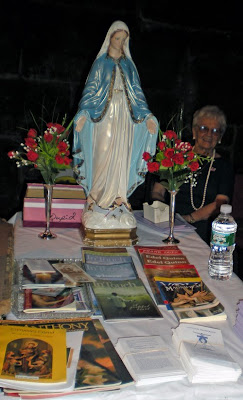 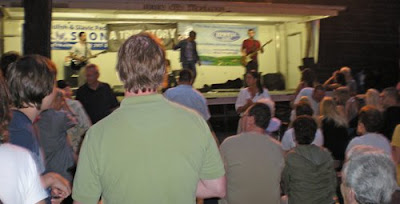 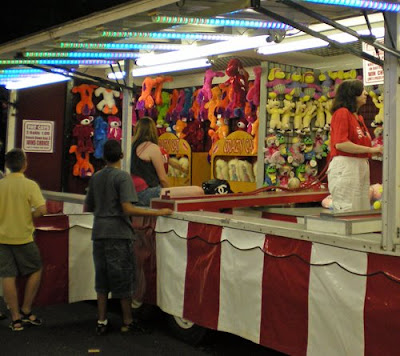 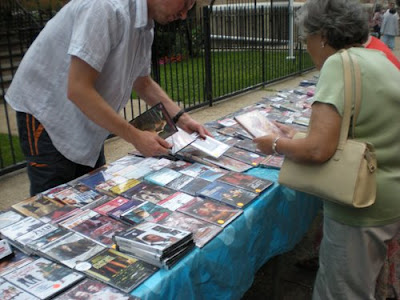 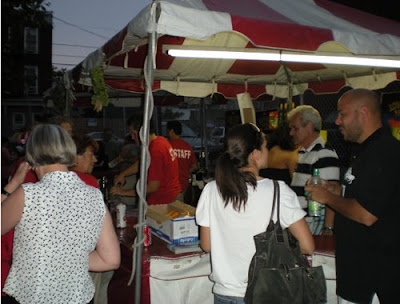 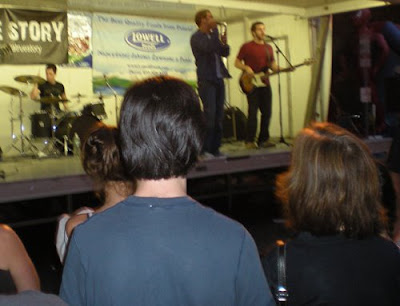 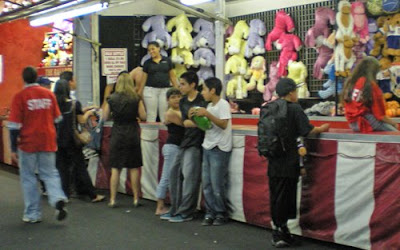 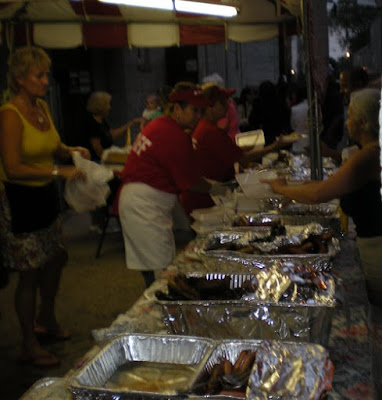 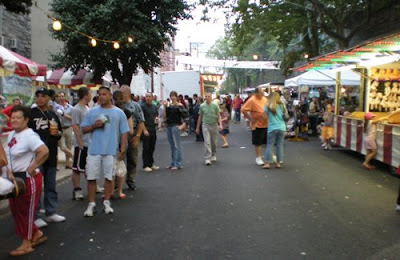 “A lot of good food there’s gonna be,” said the woman when I stopped by the Saint Anthony’s Festival in the afternoon. Got to love idiosyncratic New Jersey syntax. I returned to the scene in the early evening. The church celebrates its 120th anniversary this year, and the festival, actually entitled—“I Love St. Anthony’s Festival (I guess the “heart” is for the church and the festival)—was the first one ever. Thickening clouds threatened to fulfill weather reports predicting a thunderstorm, but the Festival was rocking.

Back in the pre-white flight, mid-20th Century Jersey City, the city was mainly Italian, Irish and Polish. The majority of each category saw their numbers decline as parishioners moved to the growing suburbs and African Americans and Hispanics—primarily Puerto Ricans—moved in. From the 50s through the 70s, a cycle was created—as more ‘people of color’ moved in, more ‘whites’ moved out. That’s only part of the story; not everybody moved. Some—maybe not most, but many—were not enticed by suburbs. They stayed. They weathered the bad times, and accepted a new paradigm—being minorities in a city of minorities. Enough descendents of Irish, Italian and Polish immigrants remained in Jersey City that their presence can still be seen and felt—bakeries, restaurants, bars, other businesses are still here, some since the 1920s. But unlike the Irish and Italian, the Polish community in Jersey City has been infused by new émigrés from Poland. Not that the Irish and Italians do not have ethnic pride, but it is at least three or four generations removed by now—their pride possesses more of a nostalgic tinge. They are not getting new infusions fresh off the boat. The Polish are. You hear the polish accent in young & middle aged adults, not just the senior citizens—most of the seniors have Jersey accents these days. There’s nostalgia going on—and nostalgia is attractive—but the culture has also been newly refreshed with late 20th & early 21st Century arrivals from the old country.

A delightful mix, and a friendly bunch. These street festivals are parish fundraisers, they are also a big party for the parish, and a way for the community at large to celebrate a segment of that community. And, you get to drink beer legally in the street!

Actually, they were serving a quite tasty Polish Lager, available at the semi-full-bar in a church court yard. It was the court yard of Holy Rosary, which holds its own Italian Festival next month.

The food, all home made, was really delicious. This was authentic and top notch fare. Kielbasa, Bratwurst, Pierogie and Potato Pancakes. There was stuffed cabbage—I am cabbage adverse—and other food items that I didn’t get to sample. Unlike other street fairs, this food was not just authentic, but gourmet-quality—as good as any Polish restaurant I’ve experienced. Without a doubt, the best Kielbasa, Bratwurst, Pierogie and Potato Pancakes I’ve ever had. The Potato Pancakes were especially good—they have long been a favorite of mine—these were crepe thin and flavorful. I will hold all future Potato Pancakes to this new standard.

I didn’t get to see any Polka, but there was a good rock quartet kicking out the jams, mixing covers of Rick Springfield, Cheap Trick and Green Day. Young guys with some real talented playing, lots of energy and a sincere Neo-Punk Rock edge. They were witty, brash and the crowd loved them. A rocking good time was had on the stage and the street!

Residents of the neighborhood wandered and ate and drank and played games. Street Fairs are the summer. Because of the unique dynamic of the polish community, the fun-vibe here was different. A gathering of several varieties of Polish Americans sharing and continuing their culture. A table sold Polish Language DVDs, another table of sold imported polish food items, another with Religious items. New arrivals assimilating and multiple generations of Polish Americans not just reminding themselves about their cultural past, but learning about the Poland present. There was more than just pride here, but a genuine pleasure. And, everyone was invited to their party. The Patron Saint of Miracles, Saint Anthony of Puda, gazed upon us all and held back the storm. Everyone repaid him with gladness and gratitude.
Posted by Mr. Tim Hrk at 5:53 AM