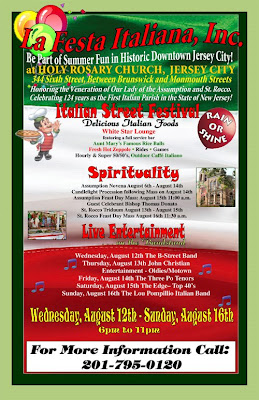 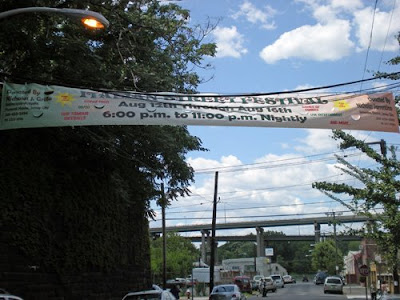 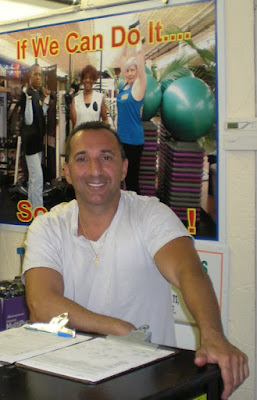 The Italian Street Festival is only a month away. The weeks preceding this annual Jersey City event—a three-day fund raiser for Holy Rosary Church held on 6th Street between Monmouth and Brunswick—are always hectic ones for Carmine Colassurdo, owner of the Gold Coast Fitness Gym on Newark Avenue. Booths, vendors, entertainment—there’s a list as long as your arm of people and things to coordinate. As usual, he’s on the organizing committee and takes an active role in making sure everything and everyone is ready. The Italian Street Festival is Jersey City’s longest continuously running street fair. The “Feast” is in Carmine's blood. He tells me, “It’s about keeping tradition alive.”

This year the 97th Festival takes place. A neighborhood block part attended by residents city-wide as well as returning former residents, the festival features an enticing array of Italian food favorites—sausage & peppers, zeppole, pizza, rice balls. Beer, wine, and mixed drinks are available. Bands play on the portable stage. There are games of skill and chance with stuffed toys and other objects for prizes. There are 50/50 raffles. There are rides and activities for children. Vendors sell religious items, t-shirts, toys, jewelry. Special masses, novenas, processions and other spiritual activities are held for the faithful. Red, green and white—the colors of the Italian flag—are seen everywhere. The tradition is alive and well and celebrated by thousands of residents, regardless of ethnicity.

The Colassurdo family—with the help of many friends—gave Jersey City the Feast, a local event embodying Italian-American Culture, the Immigrant Experience, Catholic Theology and the History of the United States. Carmine is third generation Jersey City. His family—basically his Great Uncle Mike and Great Grandfather Modesto—organized the first Festival—known then and still called by many, the “Feast”—in 1912. The Feast was the American version of an annual festival held in their home village in Italy for centuries.

Great Uncle Mike came to the U.S. in the late 1890s, one of millions of immigrants to be processed through Ellis Island. He settled in the first place he arrived at on the mainland of the United States, Jersey City. Great Uncle Mike came from Morrone Del Sannio, a small village in the Province of Camobasso, located in the mountainous Molise region of southern Italy. Like the majority of Italian immigrants during this period in U.S. History, he was a descendent of rural peasants—generations of whom endured poverty, oppression, famine, natural disasters and war. American cities were more often than not, the first cities these individuals ever saw, much less called home.

Immigrants from one area of their home country often clustered together in the New World. Italian Village was the neighborhood located on the blocks between Coles & Brunswick Street and from Christopher Columbus to 8th Street (give or take a few blocks). Holy Rosary, founded in 1885 and believed to be New Jersey’s oldest Italian Parish, was the church these new immigrant families attended. Alongside immigrants from Sicily and Naples, Italian Village contained a colony of piasanos (Italian for ‘countrymen’) from the small Camobasso village of Morrone Del Sannio. Like other newly arrived Italians, they found jobs as stone masons, construction laborers, and line-workers in the dozens of factories popping up on the New Jersey bank of the Hudson River. Great Uncle Mike, who passed away in 1940, was a small businessman servicing the community. He operated grocery stores and cafes and eventually, the Colassurdo Tavern, on 3rd and Colgate, which lasted through the late 1940s.

Life may have been better in America, but it still meant long hours of hard work and for a while at least, being strangers in a strange land. But, the newly arrived were determined to keep some aspects of their past, like family, faith and community, an integral part of their present. In 1902, Great Uncle Mike convinced his fellow piasanos from Morrone Del Sannio to join him in forming the Maria S.S. (“santissima”) Dell'Assunta Society, which means Mary Most Holy of the Assumption Society. The Society was based on a similar organization in Morrone that was centuries old. The purpose of the fraternity—membership was exclusively male—was to promote Devotion to the Blessed Mother of Jesus Christ in the incarnation of Her Assumption and perform charitable work for the community. They sent money back to the impoverished hometown of its members.

Catholic Devotions, although generally sanctioned and recognized by Roman Catholic authorities, consist of prayers that are outside official liturgy. Unlike attending Sunday Mass, Devotions are not a mandatory part of the catechism. They are an outgrowth, and personal expression, of deeply felt faith. The Assumption of Mary is a corner stone of Roman Catholic belief in the ultimate sacredness of Mary. This highly mystical concept dates back to the earliest years of Christianity. Mary, the Blessed Mother, was born without sin, meaning Original Sin, which is the sin of Adam & Eve that everyone has and is wiped away by Baptism. The Assumption of Mary is the belief that Mary was assumed into Heaven, body and soul. The mystical core of this tenet of faith is that God, the creator of all, has complete power over the physical and the non-physical, earth and heaven.

The Feast of the Assumption was declared a Holy Day of Obligation by Pope Pius XII. There is a great misunderstanding, by Catholics and non-Catholics alike, about papal declarations—they are not all “Infallible.” The Infallibility Doctrine, which was declared possible by Vatican I in 1870, means that when the Pope declares something Infallible “ex Cathedra”—from the seat or throne of the Church—he cannot be in error. Since 1870, a Pope has only used his Infallibility option once—on November 1, 1950, when Pope Pius XII issued the Munificentissimus Deus, which recognized that the Blessed Mother "having completed the course of her earthly life, was assumed body and soul into heavenly glory.” It is the only declaration by a Pope—any Pope, Encyclicals included—accepted by Catholics as Infallible.

Although Catholic theologians point to several passages in the Old and New Testaments from which the idea of Assumption is derived, it is the only Holy Day of Obligation (the days other than the Sabbath when Roman Catholics are obligated to attend Mass) not specifically found in the Gospels, but based solely on Church teachings and Dogma. The Assumption is recognized and celebrated by Russian and Greek Orthodox churches, Lutherans, some Anglican ministries and a few other Protestant denominations. It is also a National Holiday in dozens of countries throughout Europe and South America, as well as the Philippines and Russia. Why it falls on August 15th is unclear, but likely the actual date corresponds to pre-Christian, summer celebrations in Pagan Europe.

Many in the rank and file of the church celebrated the Feast of the Assumption centuries before Pope Pius XII elevated August 15th to a Holy Day. The Devotion was not a mandate from the clergical authorities, but a populous movement. Jersey City’s Assumption Society began nearly half a century before the Pope’s Infallible declaration and had been a Society among the devout peasants of Morrone del Sannio for more than 400 years.

Father Mario Colavita, pastor of S. Maria Maggiore (Mary Magdalene) in present day Morrone del Sannio, wrote to Carmine, “The Mother of God Mary most holy so venerated in Morrone in the image of Our Lady of the Assumption is a wood carved statue from the year 1600. She is the protector of our people who as always accompanied them in all situations most especially in the new social and physical environment that your great grand father found in America.”

“Our Lady of the Assumption was the patroness of that town,” says Carmine. “They prayed to her for centuries. The villagers believed she protected them against earth quakes and famines.”

The Society was always affiliated with Holy Rosary Parish, but acted as a separate entity. When the Society initiated the street festival honoring the Assumption—five years before the U.S. entered World War I—they were carrying on another tradition from Morrone Del Sannio. The Feast raised funds for the Society, but more importantly, it was a community-wide celebration in honor of the Devotion to Our Lady of the Assumption. Originally, the festival ran for nine days, the 9th day always being August 15th. This is called Novena—the number nine in Latin—which is often part of a Devotion. The faithful participate in nine days of prayer, and usually daily mass attendance, when they are fulfilling a Novena. The food, the music, the games—they were all part of the celebration—but the culmination of the Novena was the procession on the 9th day. A life-sized statute of Mary, like the one in Morrone Del Sannio, was held aloft by men of the parish. Followed by hundreds of Holy Rosary Parishioners, the Statue was carried up and down the streets of Italian Village where families would give donations and/or drape ribbons on the icon, paying tribute and giving thanks to their sacred Patroness.

Carmine’s Grandfather, Modesto, a stone mason, immigrated to Jersey City in 1910 and of course, became a member of the Society and helped his older brother organize the first Festival two years later. Every August since, the Festival has been held. World War I, World II, the Korean War, Vietnam, the Gulf War, 911, Afghanistan, the Iraq War; the roaring 20s, the Great Depression, the conformist 50s, the psychedelic 60s, the urban decay of the 70s & 80s, Clinton-era revitalization, the dawn of the 21st Century. Ten decades of Italian Americans celebrating their culture and sharing it with all their friends and neighbors.

Throughout the 20th and into the 21st century, keeping this Tradition alive was the Colassurdo family, including Carmine’s Father, Michael (named of course after Great Uncle Mike), who was born in 1922 and of course Carmine, who is 47 years old. “I was always there as a kid,” says Carmine. “I remember just having fun and having a good time and when it was closing, grabbing a broom and sweeping the sidewalk, helping my father clean up. It was just what our family did.”