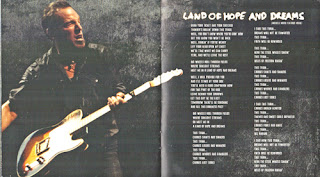 Ever since Bruce & his E Street boys did take after take, searching for the sound of emotional largeness that eventually combined the sonic lushness of Phil Spector’s Wall of Sound with the incandescent textures of Roy Orbison and Blonde on Blonde, Bruce has never been afraid to appropriate varied sources to help form a singular aural experience. Time has only made him more ambitious, playing with synthesizers on Human Touch, molding a needed truce between his ensemble bandleader intuitions and his persistent wanna be Woody Guthrie complex on the Seeger Sessions and more recently on Working on a Dream’s Outlaw Pete, assembling a nine minute opus that accomapnies a tall tale about a mythical cowboy with strings and choirs and othe studio effects, bringing a boyishly exhilirated pulp sensibly to an Aaron Copeland homage.