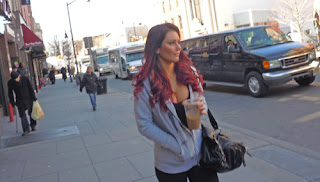 I worked at home today and for lunch I popped out for a turkey burger and the new Bruce Springsteen record, Wrecking Ball, now on sale. New Bruce… isn’t that a holy day of obligation in New Jersey?


I went to the Barnes and Noble near the WTC.


On my way home, west on the Southside of Newark Avenue, at the northern corner of Barrow, a woman is holding a large video camera, has an antenna, near a guy with a microphone, they’re looking south on Barrow. Who are they and what are they looking at. Suddenly, three, four others, with SLRs, lenses being pointed like blunderbusses towards a distant turkey. The microphone guy mutters something into a tiny microphone pinned on his collar,  murmurs spread among this gaggle of paparazzi, which now numbers more than a dozen. They are no longer interested in Barrow, everyone now gathers near that high class store that sells over-priced doggy products.
There used to be a kid’s clothing store in this spot. Jack’s. One of those Newark Avenue fires, something about the electrical system – oops! an accident, why are you asking? – cleared out that ghetto fabulous retailer from our midst, and it was replaced by this yuppie emporium for ostentatious spending on your pet. Downtown becoming another Soho, never! Well, developers have other ideas don’t they. With the Jersey Shore now part of our national image  perhaps Downtown can now become something worse than Soho, what that might be I shudder to imagine.


There is a real crowd of entertainment press now on Newark. The murmurs are louder, more excited. The lenses are aimed towards Jersey Avenue, shutters clicking away like a horde of crazed crickets.


No, they are not seeking to interview the first person in the neighborhood to bring home the new Bruce Springsteen in the old fashion manner of buying a CD in one of the few stores that still sell them.


A yellow school bus is passing by, kids are all screaming “Hey Jwoww!


She walks toward me, a young woman wearing what seemed like three inches of make up.  Her walk was regal and slow. She is a conceited young person, which is not exactly rare or unforgiveable. The difference is though, she is a TV celebrity, famous for being famous. Her vibe made sure anybody near her was instantly aware  that she prizes herself above all others, above life, love and even truth. She looks older in reality than she does in reality TV.


I had my camera out and took a picture. How could I not. If it wasn’t a celebrity, I would never do to somebody I didn’t know or to whom I had not asked permission first. She sneered at my Nikon cool pix. I was treating her like some sideshow oddity.  For that moment I cared as much about her humanity as she did about mine.
This world of ours must change.


I felt more sympathy for her than animosity. Our dismal culture is not her fault. The pounds of make up she wore were not due to her vanity, it was for the cameras. She needed it for filming, every actor does. The cameras there on Newark Avenue, now the near 20 or so "journalists"  who get paid to feed our insatiable thirst for celebrity news by reporting on a Jersey Shore celebrity sighting. They were not the MTV cameras. They were in that yuppie puppy store, whose lighting is less than optimum for filming, thus the need for massive make up. To my knowledge, no television show was ever produced in Jack's.


I was exhilarated and appalled at the same time. I have seen a few minutes of this TV show; it’s insipid crap but that never hurt neilson ratings before. Nonetheless, it’s exciting to be near somebody famous, somebody recognizable through media images, even when you could not care less about the celebrity or the utterly vapid reason that makes them famous.


The appalling part was not her celebrity, or seeing a young person so willing to revel in soulless self absorption just to be a celebrity. Well, maybe a little bit. But more so that this circus was disrupting an otherwise pleasant walk up Newark Avenue on a sunny and warm late winter day; I don’t want to live in Hollywood or Soho for that matter.  The very idea is obnoxious to me. I’m not interested in celebrity culture or MTV and I resent this distracting display being thrust in my face, impossible to ignore. I do not want to know who that young woman is, wearing layers of pancake and blush, her pink nail polish bright enough to singe your retinas. The filming of a TV show disrupted the pedestrian traffic of our neighborhood’s main thorough. It is an intrusion, nothing less.


I walked over to that ostentatious dog boutique after Jwoww glided inside. A large crowd soon formed by the store front. I couldn’t get a good picture through the window and I did not want to deal with going inside, but I did see Snookie. She wore a cute hat. She looked like just a kid posing for the cameras, self absorbed but not self aware, with too much money to spend and spending some of it on her dog. I have no reason to doubt that the authenticity of her love for her companion animals.
I had mixed though mainly negative feelings about the filming of the Jersey Shore Spin-Off show in Jersey City. I’m not a television watcher, television has dumbed down our culture and MTV is among the worst offenders. However, I thought there may be a freedom of speech issue worth considering and how bad can filming be, it’s just for six weeks.


But now I feel much more negative about allowing this TV production into our town. Hoboken banned the production, and it sure seems like a wise decision to me today.
The police were warning the paparazzi not to block the sidewalks, they were basically ignoring the cops, swarming like famished sharks with the scrum just out of reach of their jaws. The police became nasty to everybody, including me, who was basically just gawking at the spectacle. The size of the crowd, while large, was not exactly dangerous, but if I was a senior citizen, disabled or a mother with an infant in a stroller or young child, I would have to exercise extreme caution. The JC police are usually as nice as can be, polite and professional men and women, especially on a sunny afternoon. Jersey City has great cops, friendly and helpful and almost always professional. This show, and the media gang it has attracted, made the cops on duty inconsiderate and surly.


An intrusion to our lives, our public space disturbed, and that’s just the filming. Today’s Jwoww encounter augurs ill for what will happen after MTV  broadcasts the Jersey City episodes of Jersey Shore to its global audience. I honestly dread our potential makeover.


And the new Bruce? Awesome of course. One song provided an especially undeniable synchronicity:
“I awoke on a quiet night
I never heard a sound
The marauders raided in the dark
And Brought Death to my Hometown.”


Death to My Hometown – Bruce Springsteen, 2012 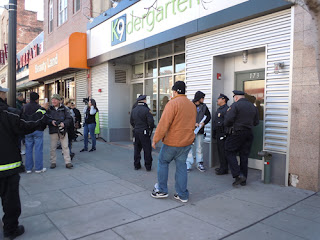