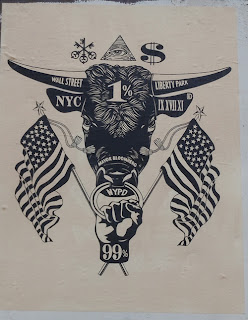 I last went down to Zuccotti Park in December. The Occupy movement has been sporadic of late; in the winter, following NYC’s dictator in chief Bloomberg’s lead, a nationwide sweep of all encampments took place and the general consensus was that the movement should go into hibernation until the Spring – this is just my impression of what I heard on the news – when then we will have an American Spring similar to last year’s Arab Spring where uprising caused change to occur throughout many nations in the Mideast.


Fragmented is too strong a word, but so far the 2012 OWS activities became a little too local with protests, for example against the NYPD’s stop and frisk policies or anti-fracking. I share their opinions on these issues, but it is my humble opinion that they tend to distract from the core issues of a more just and compassionate economic system – worker’s rights, universal healthcare, debt forgiveness – that this country needs. These platitudes are easy to spout and easy to support but to effect change requires involvement in the electoral system and the more difficult involvement in the process of policy making. Using the OWS to further political change in ancillary issues no matter how just distracts from the core change needed and dilutes a movement whose leaderless structure and unspecified agenda naturally causes confusion. The focus should be on policies that will end the economic war on the poor and middle class.


In addition, there’s an immature criticism of President Obama I find utterly distasteful. There is simply no sense of giving credit where credit is due, no recognition of how powerful and well funded the right wing is. Not that our President is above criticism, but have you seen the republican slate of candidates lately. What about a third party some say; sounds great, but don’t start with the highest office in the land. Change is not going to come in four years; the New Deal didn’t happen in the time it takes to get out of High School.  If we elected a Bush II we can elect a freak like Santorum. That potential outcome will be devastating and the idea that a republican president would be no different than Obama is arrogant stupidity. I find no sense of proportion in the criticism of Obama, their drastic ultimatums leave no room for discussion, thus display an anti intellectualism I always find distasteful. I expect it from the right; from the left it is sad and frustrating.
But, I’m observer, not an activist and everyone has an opinion. But, seeing this what seemed like new stencil on some of the ruins near Jersey City's waterfront gladdened my heart.
This piece of street art I find pretty right on, it echoes 19th century political cartons were the images contained in the piece add to an overall narrative, each possessing a meaning that adds up to the political message conveyed. The Roman numerals are the date OWS started. The Bull is a sign of Wall Street, power to the people fist pulling on its nose ring. Not sure what that means exactly, or the significance of the keys to the kingdom or the eye in the pyramid, which is on our currency. Something to do with Free Masonry I once heard.


I love the unfurling flags. Progressives are reacquainting themselves with patriotic symbols, embracing them, no longer surrounding them to right wing demagoguery. Wherever this Flag is flown we take care of our own sings Bruce on his new record. Maybe this is street art stencil is a sign of a reawakened OWS and our American Spring. The weather has been warm, the 99 percent are still here. 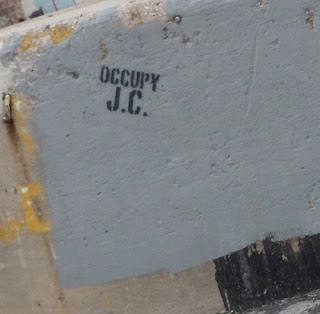