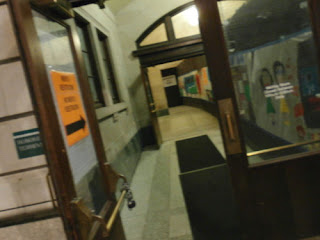 Jersey Strong, Stronger than Sandy… what is the silly sounding motto we’re all supposed to rallying around in the wake of the devastating super storm that Christie exploited into a reelection with the skill of a child prodigy turned political maestro?
Maybe the reason 60 + percent of Hoboken opposed the Christie Coronation is that while the Governor was out-front prominent our stronger than the storm beloved Jersey Shore, he was essentially a no show in Hoboken, which suffered worse than the 9th ward in New Orleans during Katrina.  If the sluggish restoration of Hoboken, especially the transit hub, one of the most critical to the local economy, was actually covered by the news media, Christie’s hero status would be reduced to, “doing a heckuva job, Brownie.” 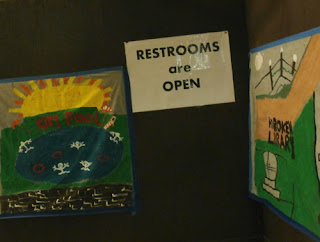 Most of the Hoboken Terminal, the historical and still charming Erie Lackawanna Terminal  remains closed – the bar just reopened, but the other food vendors and shops are closed. The ticket offices are still housed in temporary structures.

But the bathrooms reopened. In the summer, the bathrooms were closed but the waiting area had reopened. There were barriers and the main benches were still off-limits, but there new benches and places to sit and anticipate your next New Jersey adventure until your train arrived. Outdoor restroom facilities were set up at the waiting room exits, functional but the stench got worse every day. They were gross, but probably not the grossest thing you'll ever see in a lifetime. 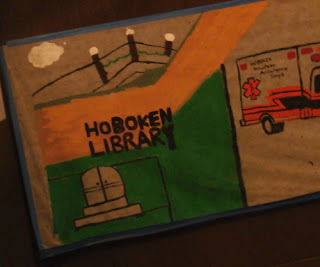 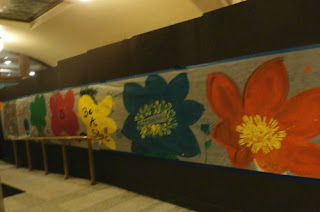 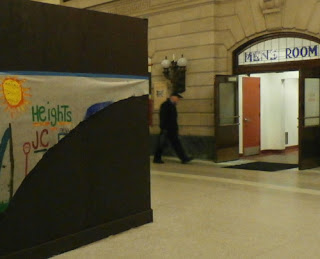 So, now the waiting area is again closed but the bathrooms have reopened. Clean and functional as public bathrooms go.

The barriers have been moved to cordoned off the waiting area and to help guide commuters answering the call to nature, a temporary mural has been placed on the barriers.

Obviously some local students drew some local images on a large roll of wax or other drawing paper.  I do not not the story behidn this delightful project, you're on own for more details.
Every kid is an artist, drawing is innate in all of us. I love seeing familiar things – like an EMT vehicle – we all know reinterpreted through a child’s eyes. Its not art, although it is artful. But art is perception and these images are steeped in perception. We are highly aware of who did the drawing, which is why the work is so compelling, not the quality of the style.

Another layer of subtext: We all know the devastating storm is why most of the terminal remains closed, why the barriers are needed, why signs are needed to inform people that the restrooms are opened and remind them where they and show them how to get there given that the usual route – via the waiting area – is again quarantined. 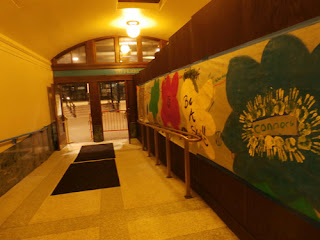 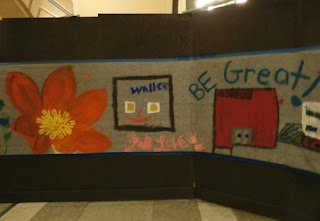 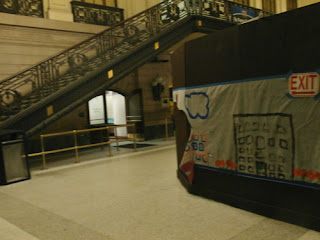 The mural itself – the sequence of images – presents a diorama of Hudson County life, at least along the Hudson. Need to pee, images by children will lead you there and remind you of where you are. 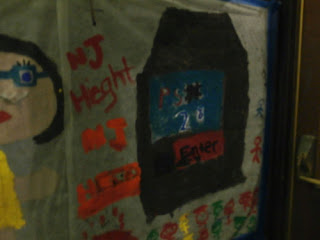 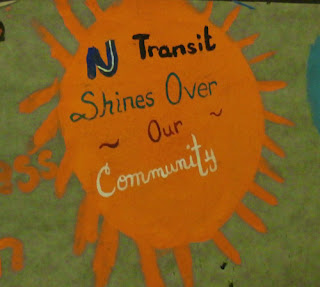 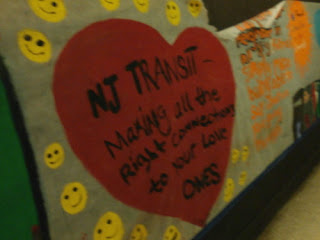 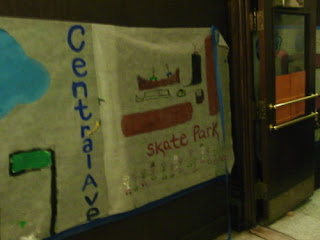