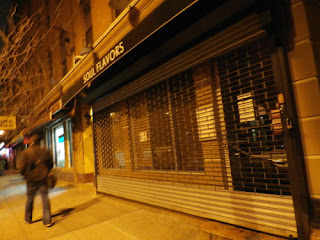 Taqueria coming soon was on the hand written sign taped to the window behind the gate. Pretty soon we’ll have as many Mexican food joints as pizzerias. I guess Mexican food is the comfort food of choice for the hipster crowd. I’m really starting to hate that word and all its connotations. Hipster. It’s currently synonymous with Gen Y, the post-Gen X gen whose childhoods coincided with the Reagan administration.

Seems to me the 80s saw the first massive wave of Mexican restaurants. Twas the decade when Benny Burrito’s was born.


They began popping up all over, then I noticed in the 90s, Mexican food declined in popularity, or maybe I had lost my taste for it. I had a few trips to California by the early 90s for business and ate at the Mexican food joints and truly, it’s a whole different strata out west. Here in the east, we just couldn’t compete. That was my simplistic opinion. But when all is said and done, I’m not that into Mexican Food, east or west. More of a fad than a mainstay for me, now only a very occasional indulgence.


However, as this new generation takes over the world is the comfort take out food of their childhoods accompanying their sluggish world dominance?


What is the difference between Soul Cooking and Southern Cooking I once asked a woman chef, who happened to be black and from the south, and she replied, it depends on who is doing the cooking.

Soul Flavors did a very credible version of this regional cuisine, I ate there a few times. I liked their black eye peas.


Soul/Southern food had a real revival in the late 90s and 00s. Artisanal, farm to table, and locavore foodie trends all helped push this style back onto our tables. Look at all those pull-pork and rib vendors now ubiquitous at all the outdoor events up here in this Union stronghold.


Who the hell knows. Food is firmly part of pop culture but I’m not quite sure what the trends within that segment say about overall culture. I’m not a foodie, nor do I watch the food network.  This post is not really about food trends, even in Jersey City. It’s about the whims and idiosyncrasies of the hyper-local restaurant business.


Jersey City was christened the Gold Coast somewhere in those optimistic go-go days of the 90s. Restaurant row was what they were calling the blocks around the Grove Street Path. Indeed, new places are opening all the time. But now as this area begins to mature, in order for the new ones to open, old restaurants now must close. It’s a tough business – discerning consumer tastes, consistently providing quality product that meets those tastes, and hoping those tastes do change so drastically that demand for your product does not decline so that your business can no longer be sustained.
Trying to guess what will take in Jersey City can be tough.


There’s other factors too, acts of landlord, acts of nature, your own personal life.  The turnover in the restaurant business in Jersey City is starting to resemble parts of New York, which is just another way of saying it is growing. A few seem to have become established contemporary landmarks, others close and are fallow until somebody else rolls the dice bringing their idea into physical space.


In the case of Soul Flavors,  Sandy finally claimed another victim a year later.

After over 6 years of trading in Jersey City, it is with great sadness that on October 27th we've had to announce the closure of Soul Flavors. When Super-Storm Sandy hit last year, we lost all our food in the kitchen with the power outage, along with the whole of our inventory stored in the basement refrigerators and freezers and store cupboards due to the flooding. Although we have tried very hard for the last 11 months to get back on our feet, unfortunately we have not managed to do so. Although Soul Flavors restaurant is closed we will be continuing with our catering business . Thanksgiving is around the corner and we wanted JC to know that we are taking orders now and can be reached at INFO@SOULFLAVORS.COM. Thank you so very much for being our loyal patrons, we have appreciated your business and could not have come this far without you all. Would you please post this and forward to your database. Thanks so much for all your help now and in the past.