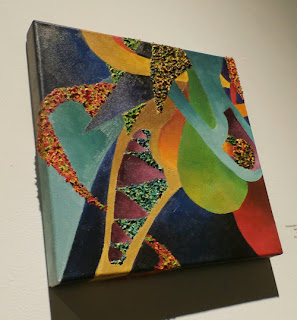 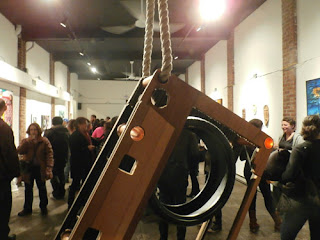 The Distillery is a “Gallery and Arts Space” in Jersey City in a section known as The Heights.


Presenting the Heights was the title of this group show, the somewhat flimsy connective tissue being these are all artists who live in a certain neighborhood.


Welcome to our own little corner of America seems to be main point.


The theme may have been lacking in depth, which not exactly rare as an organizational principal for an art show in Jersey City.


The Jersey City creative art scene may be maturing out of adolescence but its exhibition art scene is often womb-bound in terms of innovative presentation. But I don’t want to be a scold or just replay an old riff familiar to some long term readers. In fairness, the introductory and self-congratulatory nature of this group show was justified and while I am interested most in the viewing of art, organizers and artist need to focus on the selling of art. These two objectives are not mutually exclusive of course and commerce does not necessary dilute the experience of art.


Art Shows of any kind are rare in this neck of our woods, apparently new zoning laws now make the Heights more gallery and art space friendly. Due to rising rents and other factors, artists have migrated out of Downtown Jersey City to other hoods, like the Heights, and this show was a statement of a new identity for a growing coalition of artists, either distinguishing them from other Jersey City artists or at least broadening the definition and perception of what the arts are in town.


I can understand the sentiment. The confluence of the different strains of urban renewal trends as well as the random nature inherent in fate and change have conspired so that Downtown dominates the Jersey City arts spotlight. I tend to think of Jersey City as much a state of mind as it is an actual physical place, thus these arbitrary segments of cartography I tend to ignore. The reality of course contradicts my attitude. 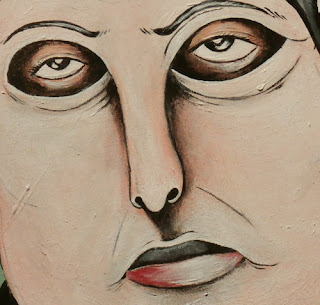 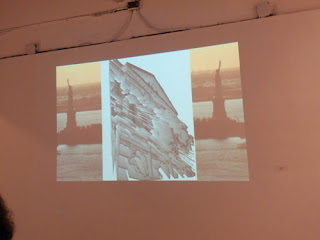 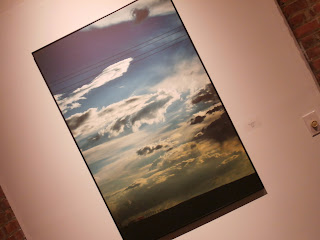 What I worry and get annoyed about is this. Jersey City is a small town – on a very small M-Class planet in the delta quadrant – made smaller by Facebook – and it’s not that now dividing it into arbitrary Bedstys and Red Hooks only further shrinks the already small town – although that is an issue –it’s just that this provincial attitude means more art and art exhibits are not about using art to explore the human condition, but prone to endless self reflection and empty promotion. Why should art play the Real Estate development game?


What undermines the art strengthens the marketing, some may think. I guess I care more about art that happens to be in Jersey City than art whose sole reason to exist is that is in Jersey City.


Shouldn’t it be about the art, not about where the artist lives?


Both aspects are of interest and value, but sometimes the Jersey City art scene can seem like an endless high school pep rally and the thematic mission of this show implied that the Junior High now wants a separate bandwagon.


That said, the space is amazing and the art compelling. The turnout was robust – few Downtown art shows get these kind of attendance, especially at a non-city sanctioned event. A J.C. Fridays opening rarely garners such a plentiful response. The crowd seemed to include new faces in addition to the usual art scene suspects, either the scene continues to grow or the J.C. Heights location attracts a new cadre of adherents. 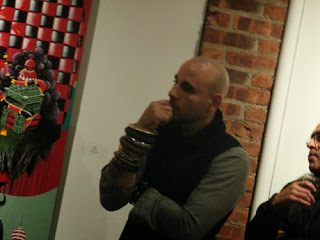 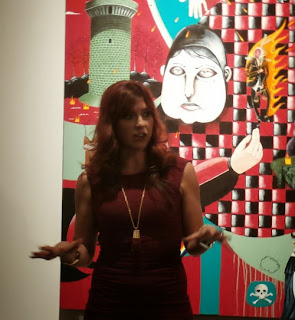 Kids were scampering throughout the event, and the two curators – Gabriel R. Pacheco and Kristin J. DeAngelis – explained the gallery is also an art school, the kids were students and presents other events, such as readings of original plays on some weekday evenings presented by the Speranza Theatre Company.
The community feel was abundant and infectious, perhaps I am too cortical about the purpose of the theme. Also, art shows and awareness of the artists here is indeed newly emerged, heralding that the Heights as the organizing principal of the event is a reasonable even virtuous decision. 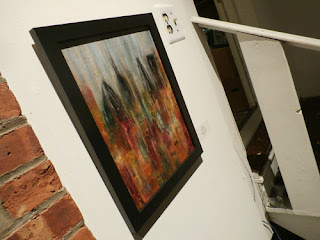 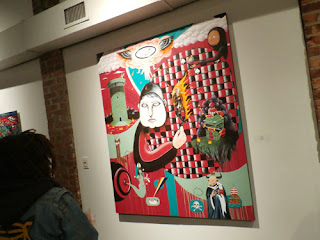 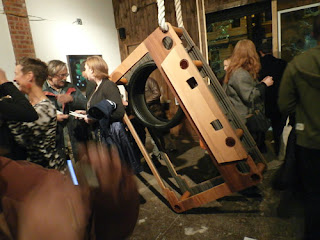 The Distillery is a former mechanic’s garage, spacious and airy, wide walls and tall ceiling, optimum for an art gallery. While far from a raw space, you still have the industrial feel, achieving a balance between the urban garage past and contemporary art space present. The walls are vast squares of white broken up by embedded column-like protrusions of brick. The track lighting is notably superb. Jersey City may be evolving from home of artists to arts destination, but there is a dearth of professional galleries.


Bars, restaurants and city hall have become make shift exhibition spaces, which is of course fun and funky, but these spaces are threatening to define Jersey City art exhibitions and their lighting is deplorable. Most lighting in most Jersey City art exhibition spaces simply SUCK! Seems more often than not, the lighting available in these spaces detracts rather than enhances the art on display. The Distillery’s lighting was deliberate and professional, an illumination quality found in Soho or Chelsea galleries. The light here let you both see and feel the art. I wanted to spend time with it and even found myself whishing the opening wasn’t so crowded. The turnout tended to dissuade lingering and reflection.


On the back wall was a video installation, projected images in a film flashed by. Three large wooden sculptures were situated throughout the gallery and accentuated the flow of visitors and formation of small groups, encouraging small talk and general schmoozing.


One sculpture looked like a rustic recreation of a cassette tape, really clever idea making an object from the more immediate past look like something from a rural era of a more distant incarnation, when we churned our own butter and had to talk on kerosene powered cellphones. 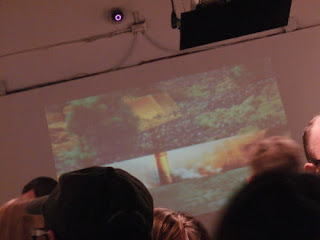 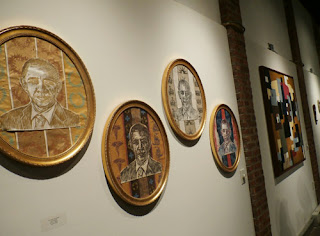 I wasn’t too sure of the Obama sketches on wall paper, although the commentary on the polarized nation seemed evident. One wall paper had two different crowns, indicating that he is some kind of monarchist I suppose but the reality is, he’s been a reluctant and uncertain King (he’s more Richard II than Richard III), frustrating many supporters with what seems to be a lack of courage to his convictions. But monarch? Or was that the purpose, the contrast, the human line heavy, etching-like sketch and the royal image backdrop, is this an argument that sets them apart or is this juxtaposition meant to reveal similarities?

Another pattern had a vertical row of the caduceus and a vertical row of the coiled rattle snake from the Don’t Tread On Me flag of the American Revolution. Was this some kind of commentary on the affordable care act controversies, which some say directly birthed the Tea Party (aided by plenty of Koch Brothers funding), who have been known to use the don’t tread on me serpent as a defining image. I dug the ambiguity of these pieces and also the echo of the image of our President, whose street art visage was so well known so early on in his first White House run that his image has become part of our visual lexicon, either transcending current events or as a reminder that we can never transcend our present day politics. The art expressed an ambivalence and my reaction was ambivalent and that ambivalence, in spite of the uneasy aftertaste, was interesting to contemplate. 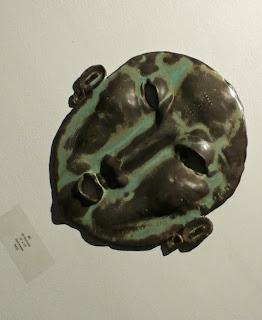 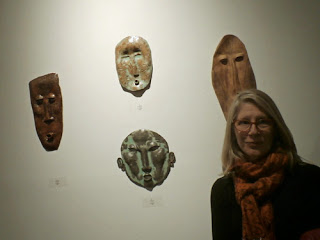 Jill Kroproski is a potter, and showing clay masks that echoed Greek theater and aboriginal cultures. She said the masks were actually just an extension of her pottery and ceramic work. 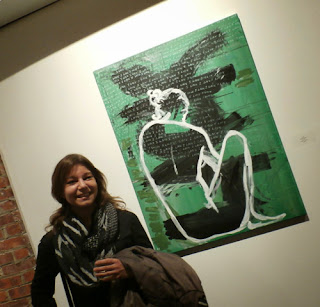 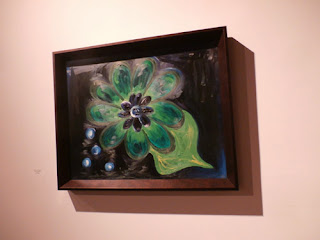 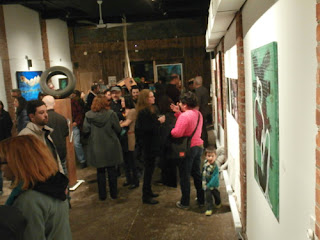 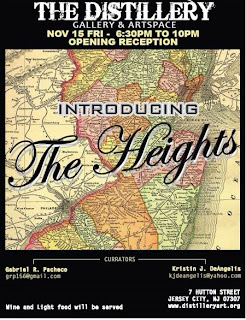 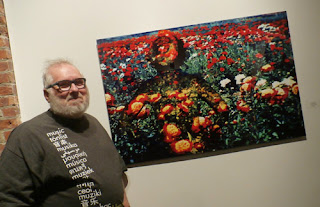 Photographer John Crittenden with one of his larger prints. The shadow imprint cannot completely obscure the field of flowers bursting with color.


No one knows everything about Jersey City. No one knows everything about the arts in Jersey City. The Distillery is something else to know, but more importantly, something worth knowing. Maybe the trite-sounding Presenting the Heights theme is inevitable for a debut gallery show, but it was apparent The Distillery is not bound by the geographical limitations of either map or mind. 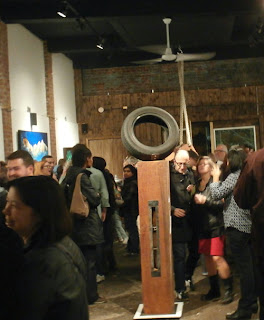