The Façade Beneath The Façade 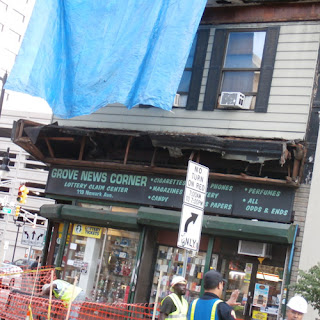 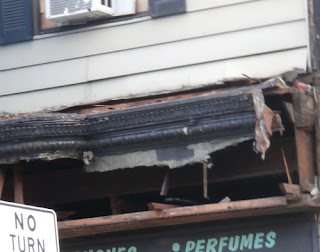 They are real friendly at Grove Street News. They’re from Pakistan. I used to buy my cigarettes there. It’s a convenience store, sells a fine line of beverages and snack items and a hodgepodge of other items, like umbrellas and head phones and perfume. There is often a line at the lottery machine, but only one or two deep usually.

A local who knows everything and everyone saw me taking pictures. I didn’t see the clawing off of the façade, I thought there had been a fire. The building dates to 1840, he said. 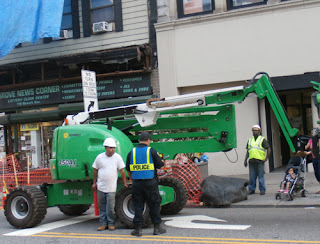 The original overhang looked rotted, was there some fire or other calamity that caused such damage, such decay? Downtown is getting all SoHo  -- there’s chain frozen yogurt shop is due to open next door – and construction projects are all 21st century, sleek and chic, even when cozy. But there was a time and one not so long ago, within the lifetimes and everyone reading this now, where we were inner-city and developers had no interested in rebuilding. An overhang of a façade is damaged, why replace and repair – just cover up with materials that are cheap and safe and utterly lacking in aesthetic appeal. Of course, that lack soon becomes part of the charm of the place, but that charm is only apparent after you call the place home. Home is the place that you have gotten used to and that has gotten used to you. 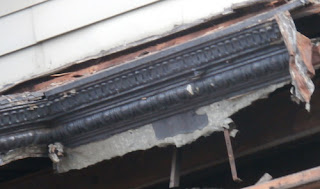 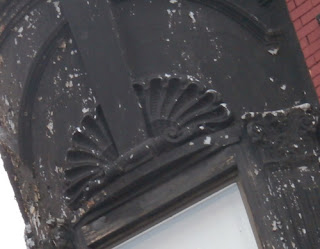 But what was underneath is more than just protruding debris.  Ornate, design details, emblematic of the rise of American urban life, a gilded age belief that frills and decoration enhanced quality of life.

“Look at those details,” he said pointing to the newly revealed façade. “You see that kind of work up and down Newark Avenue. It’s been covered up all these years.”

“The city was putting pressure on the owner of the building.” 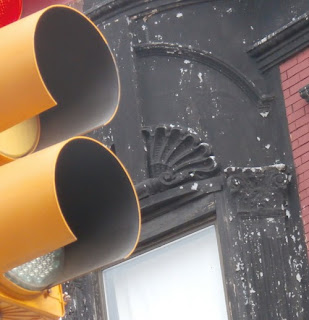 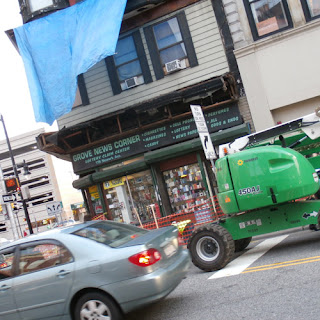 “Safety violations here and there. They persuaded him. This building was holding down the block. But the owner got some of pictures of the original building from the New Jersey Historic Room at the Public Library. He’s going to recreate the original façade, he’s going to bring back those original details.”

“I go back to the 1960s here and it was always a newsstand type store, but originally it was a bar, a tavern.”

“Certainly pre-prohibition, I guess it was too out in the open to become a speakeasy.”

We looked at the newly exposed overhand, the decayed shards in between the geometric filigrees, and all evidence of not just the past, but different phases of a city’s history… just beneath the surface connecting now to the previous forever. 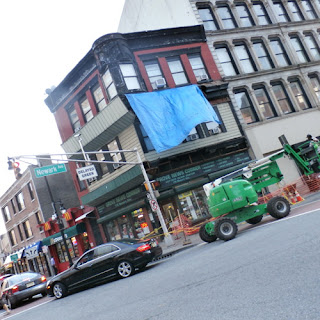 Notice the covered overhang on the  façade facing Grove Steet in the above picture, the next day that façade was removed, uncovering what we see now, below.

We looked at the newly exposed overhand, the decayed shards in between the geometric filigrees, and all evidence of not just the past, but different phases of a city’s history… just beneath the surface connecting now to the previous forever. 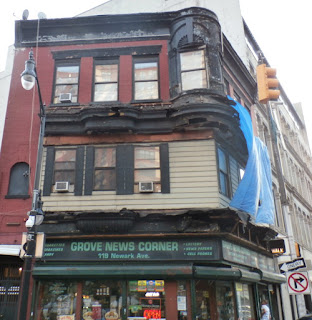 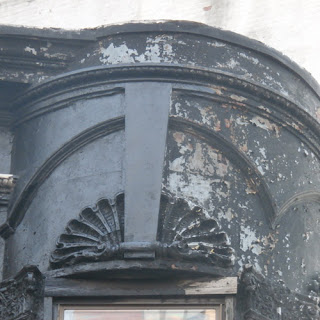 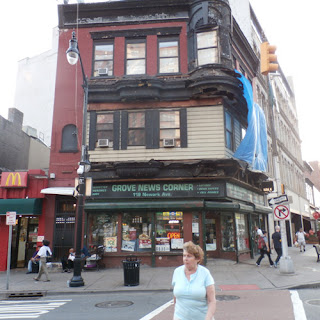