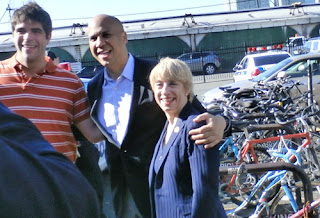 “Get your picture taken with Mayor Booker and Mayor Zimmer,” said the guy, a young white man with horn rim ray bans and a checkered print shirt, polo logo near the pocket, and chinos. You rarely see someone fly their preppie flag in Hudson County.


I told him I’m from Jersey City. Then added, “I’m going to vote for him, but he should be running against Christie for Governor.”


“New Jersey Democrats are ill-served by our politicians. But what are you going to do?”


The staffer grimaced at me. I like Booker, I like him fine. Seeing him in Hoboken, an unseasonably crisp sunny morning, from several feet away, surrounded by a small crowd, you could still feel his charisma. He’s personable, he’s a guy who lights up a room as they used to say.  He earned a victory lap after a primary win, a good way to start his general election campaign.


I guess he’s done a good job with Newark, because… well, quite frankly, how could it have gotten worse?


What I don’t like is this whole Christie business. Booker is our most well known democrat, why isn’t he is dethroning that disgrazio in Trenton?


I’m just an observer. I vote Democratic. Reaching a political decision here is a chore. 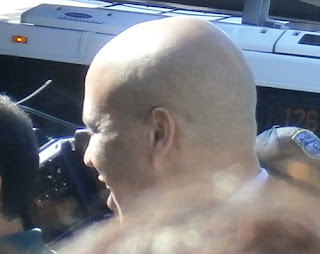 I wasn’t going to vote in the primary, which was yesterday and why Corey was seeking social media photo-ops today. On Monday, I ran into friend of mine, a teacher. She loves talking politics. She handed me a Pallone brochure. “You’re not going to vote for Corey Booker are you?”


“I wasn’t going to vote at all. Booker is going to win. I’ll vote for him in the special senate election.”


“So will I, but he’s anti-teacher and anti-union.” She knows my politics are based on the Woody Guthrie song book. Well, I love to vote and if a friend has a recommendation for a candidate I have little to no opinion on, I generally follow that recommendation. So yesterday late in the afternoon, I voted. For Pallone. He’s just been in the congress for over a decade and has a progressive voting record. Of course, his legislative history was of no interest to our news media. I guess we get the news we deserve.


The special election to fill Lautenberg’s (now there was a NJ DEM!) was a sham – in spirit if not in actuality – anyway, as is the special general election in October. If you live in Jersey City, you get to vote every other month in 2013.


Pallone set up an office on Newark Avenue. It remained mostly empty. Early on, I saw two young campaign workers, bored and listless,  tapping on their iPhones. No computers, no anything except trash and boxes on the dusty floor and faded lettering from the Wolf Juice logo, the name of the gallery boutique that used to be there. It’s one of those store fronts which is occupied by consecutive failing retailers.


No one bothered to campaign for Pallone in Jersey City, even with an office smack dab there on our Main thoroughfare. No throngs for Booker either. Nary even a flier for the other candidates either.  This seems to epitomize the malaise of democrats in the state, perhaps nationwide. What is it with Obama, his election was one of the most uplifting, exhilarating political moments I’ve lived through, yet ever since, he’s been lackluster. There’s no enthusiasm for anything or anyone among his party rank and file, as if they blew their exuberance quotient with Yes We Can. We wish he was the progressive leader the tea party accuses him of being. He is not. Coronating Corey is the easiest, perhaps even most cost-efficient way, to go. 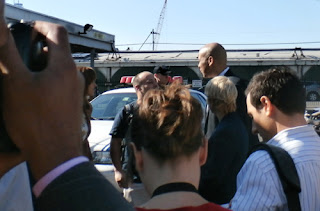 Everyone says Booker is seeking a national stage. Hey, why not. He is shiny and I’m not just talking about his gleaming shaved head. Lex Luthor was elected president too. What bothers me is elections as coronation. Where is the debate, where is the articulation of competing political ideas?  Christie has the same attitude, as if he’s entitled to his scepter as Booker projects and there seems to be some silent agreement between that if you let me get my crown and I’ll let you get yours. Meanwhile, New Jersey has one of the highest unemployment rates in the country and neither man is offering any sort of substantive idea – beyond ideological platitudes to please their ‘base’ – on how to get people back to work and on a living wage.


Yes, our leading progressive and our leading conservative will never debate. Who is the NJ Democrat who will help bring back the New Deal and save the working and middle class?


I like Booker, who has Wall Street and “internet” money behind him, which makes him viable against a conservative challenger.  I just wonder how progressive a politician with that kind of support will turn out to be.


The bar, bakery, food stands at the Hoboken Erie Lawman train station remain closed. As do the rest rooms and ticket office. You still have to use the port-o-johnny outside, 10 months after Sandy. Good thing the mayor still had time for a morning photo op outside the terminal. Guess they didn’t want to disturb commuters by posing in front of boarded up storefronts.  I wonder if she will have time to campaign for Barbara Buono. (or whatever her name is). 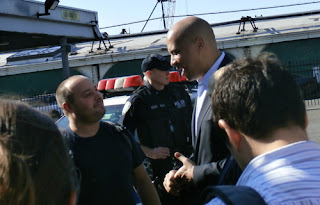 I was the 43rd person to vote at my polling place the day before Corey & Dawn. I went late in the afternoon, it was after five o’clock.  Our city’s overwhelmingly Democratic; less than 100 people voted the entire day. This was no plebiscite. I was the 183rd on the day of the Mayoral election and that was well before noon and even then only 25 percent of the registered voters turned out. Do the math.The politicians are not the only ones at fault.


“Nobody’s showing up today,” a poll worker told me. I know her; she used to live in my building. “This is worse than a board of education election.”


Of course, I almost didn’t make the minimal effort either. More people in Hoboken probably had their picture taken with Corey & Dawn on Wednesday than voted for him on  Tuesday. 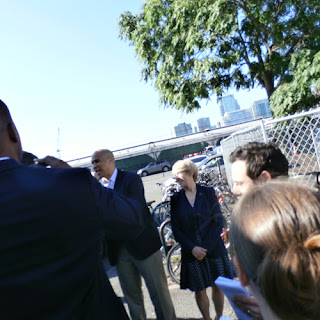